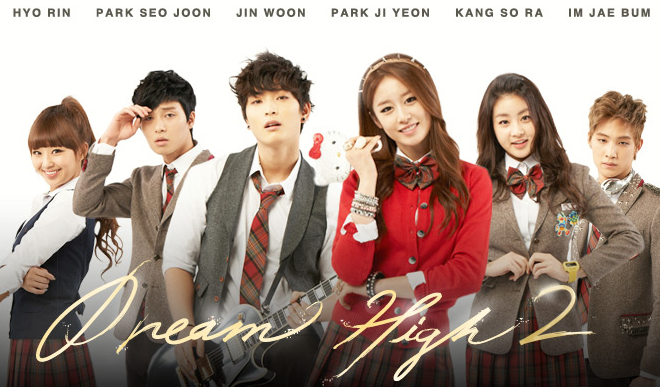 ‘Dream High’ is a South Korean coming-of-age television series that airs on KBS2. It originally premiered from January 3, 2011, to February 28, 2011. It was quite popular among youngsters, especially teenagers, and garnered favorable ratings, ranging from 18 to 20 percent, during its run-time. The series credits Park Hye-Ryun as the writer and Lee Eung-bok as the director.

A sequel, ‘Dream High 2’ started airing in 2012 with a different set of cast members. It is written by Heo Sung-hye and Jang Eun-mi and directed by Lee Eung-bok and Mo Wan-il.

Dream High Cast: Who is in it?

In ‘Dream High’ season 1, Bae Suzy stars as Go Hye-mi, a student who originally wanted to become an opera singer but now wishes to make it big in mainstream k-pop. Go Hye-mi does this in order to pay off a debt that her father owes to a gangster. Kim Soo-hyun plays Song Sam-dong, a musical genius but suffers from an uncommon illness and hails from the countryside. Ok Taec-yeon stars as Jin-Kuk aka Hyun Shi-hyuk, the mayor’s unacknowledged son, who shares a disputed relationship with his dad.

Ham Eun-Jung plays Yoon Baek-hee, the former best friend of Hye-mi. Currently, they are extreme enemies — an aftermath of Hye-mi’s betrayal in the midst of an audition. Jang Woo-young plays Jason, a native from America and a dancer, who wishes to venture into Korea’s entertainment world. IU plays Kim Pil-sook, who previously faced challenges while embarking on her musical journey because of her excess weight. She is gifted with the perfect pitch.

Dream High Plot: What is it about?

‘Dream High’ begins by introducing us to six talented students from Kirin High School, who have common dreams of becoming k-pop stars. Along with academics, they hone their musical skills, which include singing, songwriting, performing, and dancing — all the while grooming their personality. In their journey, they eventually start developing mutual romantic feelings toward each other. Each of these teens has his/her individual strengths as well and weakness. The story narrates how they support one another to finally make it to the big stage.

Just like its prequel, season 2 of ‘Dream High’ has a similar concept with a slightly different narrative. We meet a group of students in Kirin High School of Art, wishing to grow into k-pop idols. Currently, Kirin High School is under Oz Entertainment, after its previous owners faced a financial crisis. The new company introduces its own trainees in order to evade a certain law that demands students to devote a set amount of time to academics. Now, with the admission of these fresh entrants, tension brews between the transferred trainees and the already existing, troubled students at Kirin High.

Shin Hae-sung is an academically bright student and gets admitted for her high score. But she has zero musical talent. She becomes friends with fellow students, Jin Yoo-jin and JB. Yoo-jin is a part of the entertainment industry from his childhood as a child actor. Currently, he is attempting to face the obstacles on his journey toward becoming a rock star while simultaneously trying to cope up with his parents’ divorce. JB is a member of the famous group I:dn (Eden), who later on falls for Hae-sung. Ri-an comes from the famous girl band called HershE and wishes to reconcile with JB, her ex boyfriend. On the other hand, Yoo-jin also likes Hae-sung, and attempts to create differences in her relationship with the help of Ri-an. Eventually, Ri-an and Yoo-jin abandon their plans and stay close friends.

Hae-sung departs for America after completing high school. After eight years, we come to know that she is now an established composer and director. JB suffers from a leg injury and bids adieu to his dreams of becoming a dancer. He is now a music producer. Ri-an is a Hallyu star and Yoo-jin is a rock music teacher at Kirin High School and a stage-performing rockstar at night. They organize a get-together to have a reunion performance during Kirin High School’s 17th anniversary.

Dream High Season 3 Release Date: When will it premiere?

‘Dream High’ season 2 premiered on KBS on January 30, 2012. After spanning 16 episodes, it wrapped up on March 20, 2012. Although its predecessor was a hit among the audience, the sequel opened to low ratings, averaging single-digit figures. Therefore, chances of a renewal is not very high. Moreover, it has almost been seven years since the second installment’s finale. So, ‘Dream High’ season 3 looks unlikely. In case the creators do decide to come up with another season, we will update this section.

You can check out the official trailer of ‘Dream High’ season 2 below.