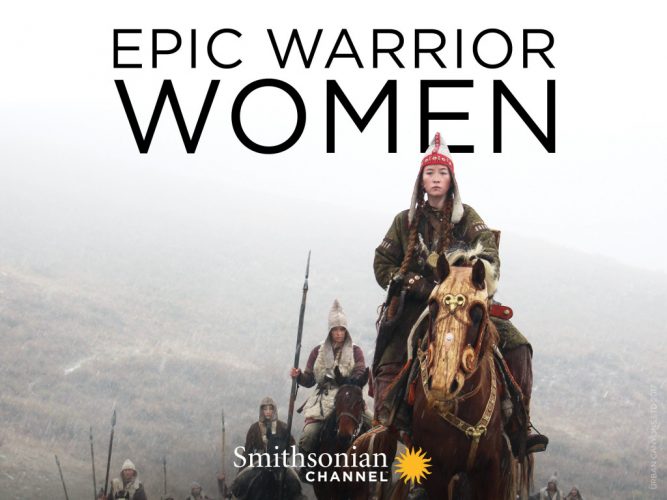 Epic Warrior Women is a historical TV series that documents the life of history’s most iconic and famous female fighters. Each episode tells us the tale of glory, sacrifice, gore, blood as well as endurance of these women warriors. The series chronicles around the life of young women who have to struggle in their lives by fighting various battles. This extraordinary series features legendary tales of urban women such as Wonder Woman and Ajoogi Women Warriors. We all have mostly heard of stories about men in the warfare, but there is proof that women were also part of battles. In this series, the narrator also tells tales of the gladiators of the Roman Empire, the legendary Amazons of Central Asia as well as the all-female fighting force of West Africa. It also showcases how these women fought fiercely shoulder to shoulder with men wearing their bravery on their sleeves. The first season of the series was aired on 19th March 2018 0n Smithsonian. The series is directed by John Wate.

Epic Warrior Women Season 2 Cast: Who is in it?

The actors for previous season of Epic Warrior Women included Aimee AkapoToulan as Sukeoun, Nathalie HounvoYekpe as the King’s wife Obaseki, Jean Michel Coulon as Ambassador Bayol, CecilineAbissi as Nansica, Nicolas DravoHouenou as King Behanzin, Bettany Hughes as Herself, Terri Ochiagha as Herself, Martine D’Souza as Herself, Suzanne Blier as Herself, Adrienne Mayor as Herself, and SusujiBehanzin as Himself.

Epic Warrior Women Season 2 Plot: What is it about?

The TV series highlights the journey of real women warriors who existed in the ancient period. In the previous season, the show follows the life of Scythian orphan girl Alkaya. While growing up, she learns various skills in combat and becomes a fearless and a skilled horse warrior. In the 6th Century BC, she decided to combat against Persian invaders and led her tribe into a legendary battle. In 2nd Century AD, a woman named Ardala is sold into a Mediterranean gladiator school. She is a celt warrior who transforms from a rebellious student to a merciless fighter. She fights various enemies to take vengeance for the death of her friend and mentor, Zonena. In West Africa, the Agooji women warriors were one of the most feared and elite force. They were very brutal when it came to fighting against their enemies. It is also believed that they used to raid their slaves in the Kingdom of Dahomey.

The next episode featured Amazon women warriors in 6th Century BC. It is said that they were a part of the Scythian rule who shaped the Central Asian history. The show also focuses on the weapons and the costumes they use to wear at those times. The weapons and costumes in the show are the exact copy of the ones found in the graves of these warriors.

Epic Warrior Women Season 2 Release Date: When will it premiere?

Smithsonian hasn’t made public any news of an air date for Epic Warrior Women season 2. The three-part miniseries was not necessarily intended as a one-off as there are many more stories to tell of woman warriors who had been responsible for changing the face of history. With that in mind, the possibility of a second season doesn’t seem like such a far-fetched idea. However, since there is no news as of now, the current status of the show is unknown.

The second season has not been renewed, but you can watch the trailer for season 1 added below.