Will There be an Escape at Dannemora Season 2? 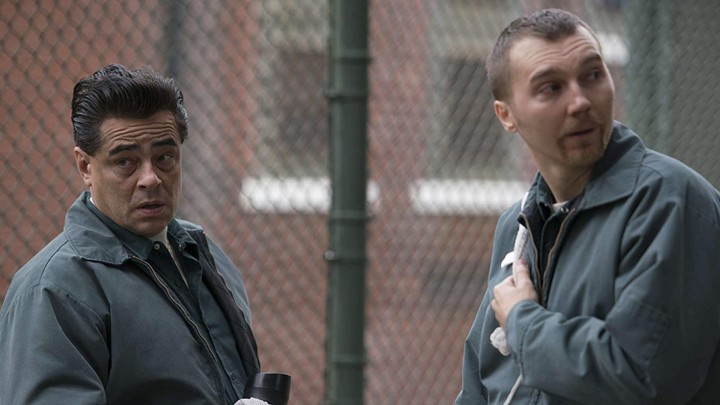 ‘Escape at Dannemora’ is a mini-series that airs on Showtime and is inspired by real crime events. It is based on an escape, orchestrated by two inmates, from a high-security prison. The show then narrates how the duo is eventually captured. Directed by Ben Stiller and created by Brett Johnson (‘Mad Men‘) and Michael Tolkin (‘The Player‘), the first season of the show premiered in November, 2018 to widely positive reviews. Audiences, too, slowly came on board.

Now the question is, whether there will be an Escape at Dannemora Season 2? Let’s try to find that out.

Escape at Dannemora Cast: Who is in it?

Actor Benicio del Toro plays the role of Richard Matt, who is a convicted murderer. In reality, Matt was a sinister criminal, who with the aid of an accomplice, slayed his boss to bits with the help of a hacksaw. He was not arrested for the crime and again, ended up stabbing another man to death. Patricia Arquette stars as Tilly Mitchell, a married prison worker and as per the real events, she got involved in a sexual relationship with the two convicts, Matt and Sweat. Tilly played an important part in helping the duo escape from the high-security prison.

Escape at Dannemora Plot: What is it about?

Based on the true events of a prison break that happened in 2015 at the Clinton Correctional Facility in upstate New York, ‘Escape at Dannemora’ is directed by Ben Stiller and includes a stellar cast. The real-life incident resulted in an intense manhunt campaign of the two prisoners, who were aided by a married prison worker who was entangled in a sexual relationship with the convicted duo.

In the tv adaptation, toward the end of the series, we witness that the two main characters are either dead or behind bars. While Matt ends up being killed by a gun-shot following his escape, Sweat is issued a life sentence with no chances of parole. This is exactly what had happened to the real-life individuals during the 2015 case. Even Tilly gets a seven-year sentence for assisting Matt and Sweat.

Packed with dark humor and seamless direction, ‘Escape at Dannemora’ is a tense, thoughtful, slightly surreal drama. The finale is over 90 minutes long, almost matching the length of a feature, but it is necessary to give a conclusive end to the story. The entire series spans approximately seven hours and each episode boasts epic storytelling. Depicting a meticulously planned and well-executed operation, ‘Escape at Dannemora’ manages to keep you on your toes.

However, some critics were of the view that the story loses its urgent relevance since it unnecessarily stretches over seven episodes. It could be wrapped up in a more concise manner within a shorter time-frame. But still, the makers have done an awesome job in re-enacting a chilling true-crime incident in this engaging tale.

Escape at Dannemora Season 2 Release Date: When will it premiere?

‘Escape to Dannemora’ season 1 premiered on Showtime on November 18, 2018. After running for seven episodes, it wrapped up on December 30, 2018. Before its tv release, the show got its global premiere at Cannes. It was showcased on the first day of Mipcom, the biggest event on the international TV calendar. The expectation was that the show would premiere on Showtime right after that but it was pushed to November, which marked its airing month.

‘Escape at Dannemora’ was planned as a mini-series that opened to a lackluster rating which eventually improved as new episodes were aired. Season 1 ended with a 0.719 million viewership and received generally positive reviews. However, since there is limited source material, ‘Escape at Dannemora’ may not be picked up for season 2. Season 1 neatly wraps up the story and leaves no threads open to concoct a second season. So, for all practicial purposes, ‘Escape at Dannemora’ season 2 cancelled even if there hasn’t been any official announcements yet.

Historically, there have been instances where a show originally conceived as a miniseries went on to receive multiple seasons. But in this case, there’s no scope for the creators to devise further plots that diverge from the original subject matter — which is something that would need to be done if another season is commissioned. Therefore, you can rest assured that ‘Escape at Dannemora’ season 2 is not happening. In the rare event that there are further changes, we shall update this section immediately.

You can check out the official trailer for season 1 of ‘Escape at Dannemora’ below. You can also head to its official website if you wish to catch up on all the previous episodes from the series.