When Does Escape the Night Season 5 Start on YouTube? 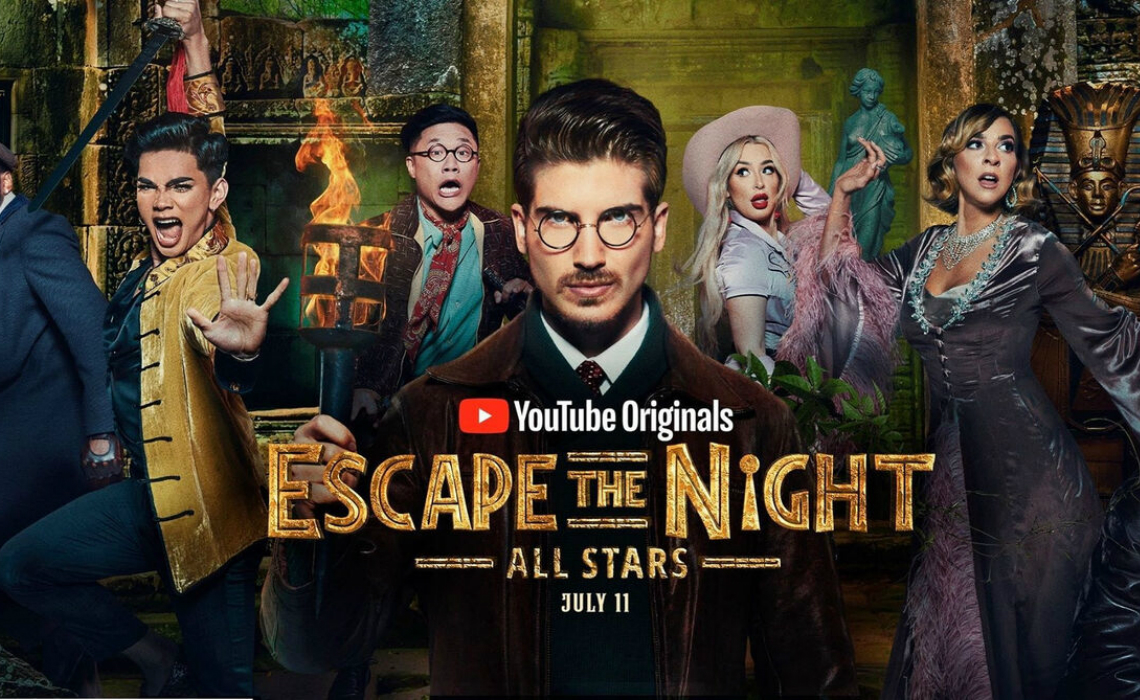 ‘Escape the Night’, the longest-running YouTube Original web series, is a lightly scripted, murder mystery reality show that first debuted on the platform on June 22, 2016. Produced by Brian Graden Media, the competition combines various fantasy elements with horror components. Creator Joey Graceffa shares his excitement for the show, saying, “Creating Escape The Night has been such an honor. This all-stars cast has really elevated the show and couldn’t be more proud to be the longest running original show on YouTube Premium. Thank you to our amazing, dedicated fans!”

After completing a successful run for four seasons, the question is will there be a Escape the Night season 5? Here’s what we know.

Escape the Night Cast: Who is in it?

The show features Joey Graceffa as the creator and host. He is a famous YouTube personality, actor, author, producer, and singer who owns and runs two officially active YouTube channels. One of the channels features his vlogs, while the other is dedicated to video gaming content.

Other cast members include Tana Mongeau as ‘The Pin-Up Girl’, Justine Ezark as ‘The Adventurer’, Destorm Power as ‘The Enforcer’, Timothy DeLaGhetto as ‘The Con Man’, Alex Wasabi as ‘The Aviator’, Rosana Pansino as ‘The Socialite’, Gabbie Hanna as ‘The Hollywood Star’, Colleen Ballinger as ‘The Duchess’, Jack O’Connor as ‘Mortimer’, Eva Augustina Sinotte as ‘The Sorceress’, Shiobann Amisial as ‘The Collector’, and Bretman Rock as ‘The Playboy’.

While many main cast members might return for season 5, expect most of the cast to be new. The good news is that Graceffa is sure to return as host.

What is Escape the Night About?

The format of this addictive reality show introduces us to ‘The Savant’, who lands in a mansion from an ancient era. He sends invitations to several guests for a party in the estate, where they require to act and dress as different entities from that particular era. After they reach their destination, they cannot have any communication with the outside world and need to face a series of survival challenges, in order to escape the night. Some of the tasks include escape room puzzles and competitive battles. In each episode, toward its end, two participants are voted into a challenge to compete against each other. The one who loses is eliminated by means of fictional death. Finally, the ultimate winner, who manages to survive all the ordeals, is sent back to the modern world.

If you have followed the series, you will know that previous seasons follow the cast of YouTubers as they go back to a 1920s dinner party, a Victorian ball, and a carnival in the 1970s. The fourth season introduced ‘Jumanji’-style set up. It will be interesting to see what kind of new set up the creators imagine for season 5.

Escape the Night Season 5 Release Date: When will it premiere?

Branded as one of the most successful YouTube Original series, ‘Escape the Night’ seasons 1, 2, and 3 have garnered 20 million, 26 million, and 12 million views, respectively during the premiere of the first episodes. Hence, with such tremendous response, we would not be surprised if the show gets commissioned for multiple renewals. Although there has not been any official announcement yet, it is not quite difficult to predict release schedule for next year. ‘Escape the Night’ Season 5 will most likely premiere sometime in July 2020. We will update this section with the exact dates as soon as they are announced.

Below is the official trailer for ‘Escape the Night’ Season 4. If you have not watched the series yet, you can also head to YouTube Premium to catch up on all the previous seasons.