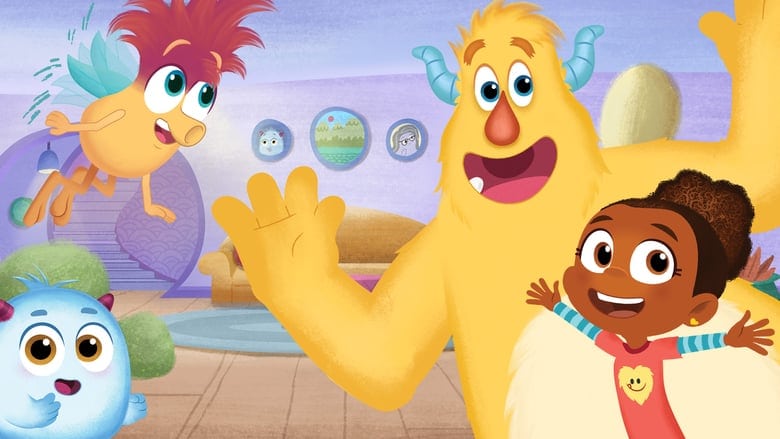 ‘Esme & Roy’ is an American-Canadian animated children’s television series from the makers of ‘Sesame Street‘ which airs on Treehouse TV (Canada) and HBO (US). The series is based on two best friends, Esme and her monster friend Roy, who are known to be the best “monstersitters” in the fantasy land of Monsterdale, a world inhabited by monsters of all kinds. Esme and Roy take care of the monstrous creatures and make them learn new tricks and lessons to help in various situations. The show is created by veterans Dustin Ferrer and Amy Steinberg, and is directed by Mike Fallows.

The show first made its way to viewers’ screens on August 18, 2018, and it is understood that 52 11-minute segments of the show has been ordered as of now, which is equivalent to 26 half-hour episodes.

Esme & Roy Plot: What it is about?

In the show, Esme is portrayed as a human “monstersitter” with a knack for inventing fun activities to keep baby monsters occupied, while also helping them learn. Roy, a yellow monster, is Esme’s best friend and helps her out with his seemingly inexhaustible knowledge of monsters. Together, the duo form the most in-demand monstersitters in Monstervale, who help out the guardians of baby monsters by keeping an eye on their babies.

Aimed at preschoolers aged between four and six years of age, the show adopts a “learning through play” approach and it takes its young viewers on numerous adventures filled with relatable (monster) characters, humor, playful learning, and musical sequences. Indeed, the show is aimed at helping youngsters overcome childhood fears, such as fears of thunderstorms, and also helping them overcome childhood prejudices, such as trying new food. Apart from helping children overcome problems, the show is also filled with lessons, big and small, which encourages children to learn complex issues of communication, collaboration, empathy, and self-regulation of extreme emotions in a simple and fun way. In this capacity, the show’s characters aim to serve as positive role models for preschool kids.

Understandably, the show has been lauded for its approach, as well as for the educational value each episode carries. It was received positively by viewers as well as critics, who described it as “thoughtful approach to self-awareness and mindful behavior makes it an excellent tool for families and caretakers to use in teaching similar skills to kids.”

On IMDb, the show enjoys a good rating of 7.8/10, and Common Sense Media’s Emily Ashby has given it a rating of 5 out of 5 stars.

Esme & Roy Season 2 Release Date: When will it premiere?

If the positive reactions to the show are anything to go by, it’s quite likely that ‘Esme & Roy’ will be renewed for a second season, and will address more issues that children encounter at a tender age. ‘Esme & Roy’ Season 2 is most likely to premiere sometime in 2020. We will be keeping an eye out for news on Season 2 of the show, and will update this section with relevant and reliable information as and when announcements are made. So, do check back from time to time.

While we await news about Season 2 of ‘Esme & Roy’, here is the trailer for Season 1 to give you a glimpse into what the show is all about. If and when a trailer for Season 2 is released, we will be sure to update this section to reflect the same. So, stay tuned.