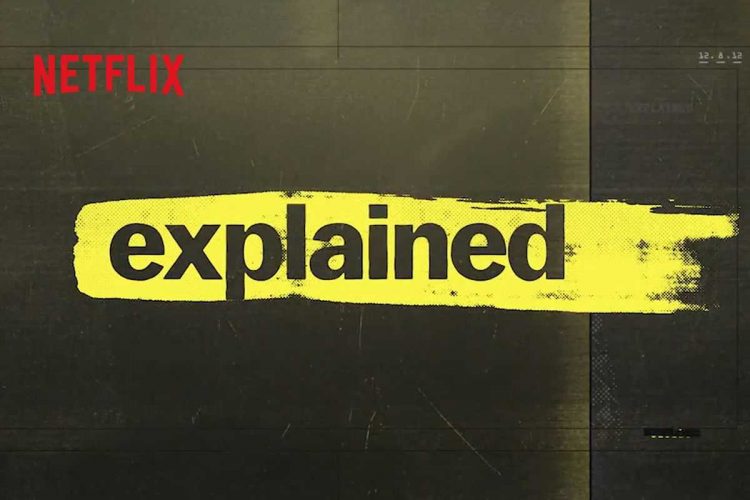 ‘Explained’ is a documentary television series that first premiered on May 23, 2018 on Netflix. The series is produced by Vox Media, with Joe Posner and Ezra Klein attached as creators.

The show first came up as an idea to the creators at Vox back in 2015. They wanted to make some space within the generalized media content for newsworthy and interesting topics which arouses viewers’ curiosity. Aptly named ‘Explained’, the show seeks to explore several big questions that are relevant in the present day. If you are familiar with Vox’s YouTube channel and the kind of videos they post there, this should not come across as something very different.

This series might be another of Netflix’s addition to their list of shows that seek to explain various aspects of the world around us like ‘Bill Nye Saves the World‘, but has deeper importance. Although, Netflix is not actively branching out into reporting news, Vox’s documentary, with its detailed style of explanation, is the closest to any news we can get on the streaming platform. This raises the question if the future of video news in a post-cable world lies with streamers, and if so, Vox’s move into this domain might be an early sign of a shifting trend. If you want to satiate your curiosity about various worldly subjects, look no further than this series which makes proper use of experts, linear storytelling and easily understandable charting to simplify complex concepts and put it across to their viewers.

Explained Cast: Who is in it?

The cast members of ‘Explained’ include several narrators of the show. While the YouTube videos had Vox staffers doing the narration, a Netflix show warrants the involvement of some familiar faces, so that their star power can be a crowd puller. Some of the narrators are Estelle Caswell Maria Bello, Kristen Bell, of ‘Gossip Girl‘ and ‘Frozen’ fame, Rachel Bloom, LeVar Burton, Joss Fong, Carly Rae Jepsen, Nick Kroll, Coleman Lowndes, Kyle MacLachlan, of David Lynch’s ‘Twin Peaks‘ fame, Aasif Mandvi, Rachel McAdams, famous for her role in ‘Mean Girls‘, ‘The Vow‘, and ‘Spotlight‘, Yara Shahidi, of ‘Black-ish‘ fame, Christian Slater, of ‘Mr. Robot‘ and ‘Heathers‘ fame, Kevin Smith, of ‘Mallrats’ fame, Jerry Springer, Samira Wiley of ‘The Handmaid’s Tale‘ and ‘Orange is the New Black‘ fame, among others.

In the upcoming season, surely we will see many more of such famous personalities coming on board as the narrator, while some of the stars from the previous season might also be returning.

Explained Plot: What is it about?

‘Explained’ features a 15-minute docu-series with focus on an interesting topic every week. Each short episode of the show lends a shot of knowledge on a present and historically relevant subject. Every topic is supported by the archived information, interviews of experts on the subjective fields, and by in-depth reporting. The show leaves the audience with at least slightly more information that they had before. Each topic is broad enough to catch some general interest. At the same time, they are all specific enough to leave the viewers with sufficient information to research independently if they wish to, this is what makes the series cool.

The series is also unique in the way that Netflix is the one dipping its toes into the water full of news and information from all around the world. The show ventures into the market with current affairs, political debates and seeks to fill the spot for its viewers. The topics covered in the series are not urgent, but still very important for people to absorb and understand. The series brings all the reportorial tools, and visuals to the viewers by taking as less time as it can. It focuses on the big topics that help to make some sense of the world which is going by faster by the day.

To make every episode of the show more interesting and engaging, each of them is narrated by some public figure, a celebrity or any popular personality. It might not seem like much, but their willingness to lend their voices to this series makes the information feel more imperative and relatable. The series is also careful never to patronize the viewers, considering Netflix’s diverse audience base. On the other hand, the abstract concepts and historical timelines are presented in a manner that viewers can wish to digest whatever they want.

The topics on the show have ranged from the wage gap to polygamy to K-Pop. ‘Explained’ also brings in real life stories or crowdsource information to show the impact of the topic in question, apart from involving the usual array of experts who can present the facts and data. Mere cold data might be objective, but it often makes a topic boring, and thus the show combines it with a personal story so viewers can find it to be more relatable.

There are so many endless subjects and topics to cover that we cannot wait to see what ‘Explained’ takes on next. One thing is for sure, this show is changing the popular concept of Netflix and chill, to Netflix and chill, and learn, which is commendable indeed.

Explained Season 2 Release Date: When will it premiere?

‘Explained’ Season 2 is all set to premiere on September 26, 2019 on Netflix. Don’t forget to mark your calendars.

While we wait for ‘Explained’ Season 2, you can check out the trailer for Season 1. If you have not seen the series, but have an innate curiosity about a wide range of subjects under the sun, then this is the show for you.