Will There be Extinction 2? 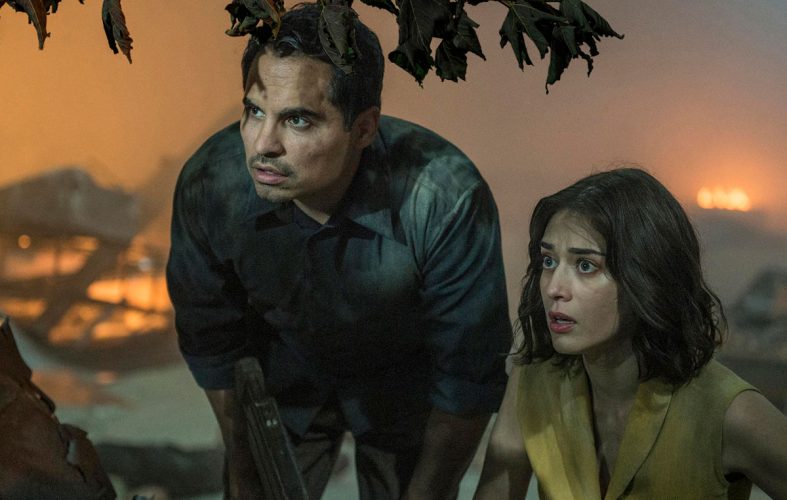 Although science fiction movies can infinitely push the boundaries of human imagination, most of them end up being rather similar to each other. Of course, there are the few pleasant exceptions that make us sit up and take notice. ‘Extinction’ is certainly one such film, which came out in 2018. Despite appearing to be a run of the mill alien invasion movie inspired by the likes of ‘War of the Worlds’, ‘Extinction’ soon established itself as a film that deals with a much deeper premise, and is not afraid to throw curveballs at the audience.

The plot deals with a father who continuously has visions about losing his family and witnessing a powerful force that is bent on destruction. The movie was initially supposed to be released by Universal Pictures, but they backed out of the deal, following which, Netflix purchased the film. However, it was not one of the platform’s smarter choices, since critics lampooned it, saying that the storyline was confusing.

While it seems unlikely that ‘Extinction’ will be getting a sequel, due to the negative reception of the first film, the filmmaker does set up some interesting plot points that could lead to a very successful sequel. Thus, we bring you everything we know about ‘Extinction 2’.

Extinction 2 Plot: What Can It Be About?

The plot of ‘Extinction’ seems to be a straightforward alien invasion, about which a man seems to have recurring visions. Although his family does not know how to react to his visions, when the invasion comes, they turn to him for answers. What should have been a simple face-off between humans and aliens, is given a deeper twist, when it is revealed that the aliens are actually humans who have colonized Mars, and have now come to reclaim Earth. Who are they reclaiming Earth from? Well, they are taking back the earth from droids who ran humans off the planet centuries ago. Thus, the man who was seeing the visions of the invasion is actually a droid. While we get the backstory of the rift between humans and droids, the crux is that peaceful coexistence between the two is possible.

However, by the end of the first movie, we are left extremely far away from any possibility of peaceful coexistence. What we have instead is the very real possibility of war breaking out. The director painstakingly establishes the fact that both the droid and human camps have some people who are bent on extreme actions like war and genocide, while there are some sympathizers and detractors in both camps. The sequel, if it happens, is sure to be bloodier than the first movie as we might see the droids and humans in the middle of a war to claim control over the planet. Undoubtedly, there will be a group made up of parties from both sides, who will take a non-partisan approach and attempt to break up this conflict. Naturally, this puts the group in the crosshairs of the two warring factions.

The risk will surely be high, but the reward is the continuity of the planet and peaceful coexistence. With so much at stake, there is no way that any of the parties will be willing to back down, leading us to believe that the sequel to ‘Extinction’ could be a much tighter film, with a fast-paced plot and plenty of action.

Extinction 2 Cast: Who Can Be In It?

In the event that a sequel to ‘Extinction’ is made, we are sure that Michael Peña will reprise his role as Peter, who is the protagonist of the story. Peter is the one who has the visions and ultimately has to protect his family from the humans. That being said, he is averse to waging war against the humans and eventually comes to believe that the invasion can be quelled if the droids decide to opt for coexistence. In the sequel, he will surely be one of the loudest voices advocating peace from the droid camp. Lizzy Caplan appears in the role of Alice, Peter’s wife, and will surely reprise her role in the sequel as well, adding a family dynamic to the plot.

Among other characters that are sure to appear is David, Peter’s boss, and one of the droids bent on destroying the human invasion. The character is played by Mike Colter.

Extinction 2 Crew: Who Can Be Behind It?

‘Extinction’ comes from Ben Young as the director with a story from Spencer Cohen. In the event of a sequel, the director might return to helm the film, but probably there will be some changes brought to the writing department since the first movie was criticized for a confusing plot, which the sequel will attempt to rectify.

Extinction 2 Release Date: When Can It Premiere?

The first ‘Extinction’ movie took some time to make since Universal backed out of the deal, but now that the film has found its home at Netflix, a sequel will quickly be set in motion, if the project is greenlit. Perhaps we might expect ‘Extinction’ 2 to arrive in 2021 or 2022.

‘Extinction 2’ does not have a trailer yet but you can check out the trailer for ‘Extinction’.