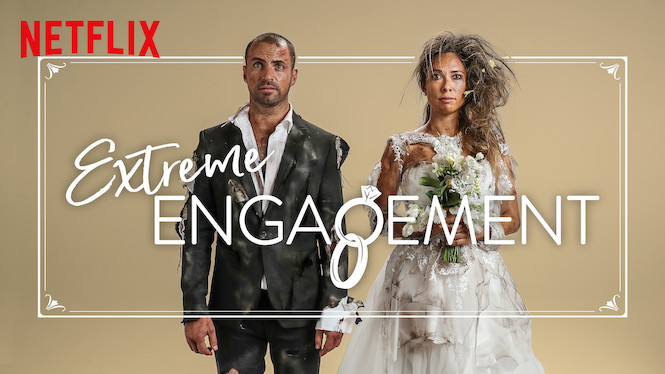 It is a proven fact that travel makes your relationship stronger. When you journey to unknown destinations and embark on never-experienced-before adventures, you not only revive your latent traits and interests but also witness a different side of your partner. Sometimes, such activities make that cliche adage of ‘falling in love all over again’ a reality. As and when you learn new things about your significant other, you get an altogether different perspective about him or her. Additionally, when you face challenges and need to take decisions together, you have to work as a team. This makes you realize if your partner is actually your better half or not.

Redefining this concept of travelling together for a stronger bond, Netflix Original ‘Extreme Engagement’ truly sticks to the definition of wild engagements. The travel show follows one extraordinary couple who hit the road for one year and take on the marriage traditions of eight different cultures. You might have seen many dating series, but trust us, nothing can be compared to this reality TV show, which promises to take you on a unique, wild ride. ‘Extreme Engagement’ is the first Australian original unscripted series on Netflix and it is executive produced by Tim Noonan.

Extreme Engagement Cast: Who is in it?

‘Extreme Engagement’ follows the engaged couple, Tim Noonan and PJ Madam, who travel the world to explore the wedding rituals of various cultures across the planet. Noonan, a globe trotter, filmmaker, multi-award-winner cameraman, journalist, and television presenter, is the co-founder of Wildman Films, alongside Madam. He has hosted and created multiple TV shows, such as ‘Boy to Man’, ‘Wildman: Extreme Adventurer’, and ‘Rite of Passage’. On the other hand, Madam is an avid traveler, news reporter, producer, writer, and anchor

Extreme Engagement Plot: What is it about?

PJ and Tim, when they set eyes on each other, it was love at first sight. So when he proposed to her, she immediately said yes. However, the duo wanted to test if they are actually compatible for marriage. Hence, they decided to embark on a journey to understand the wedding traditions of eight diverse cultures across the world. ‘Extreme Engagement’ follows the couple as they visit the remotest corners to witness how these tribes make their relationships work.

While PJ describes herself as someone who has her own mind and goals, Tim claims to be an adrenaline junkie. As they embark on thrilling adventures and support one another through thick and thin, they need to figure out the answer to a single question — are they compatible enough to take the next step? We see the pair celebrate happiness and engage in minor squabbles regarding each other’s choices or decisions. In many situations, they are even forced to re-evaluate their relationship. So will this quest make their relationship stronger and prove that they are the right team? Or will it simply tear them apart? Watch the series to find out!

Extreme Engagement Season 2 Release Date: When will it premiere?

‘Extreme Engagement’ Season 1 premiered on July 12, 2019 on Netflix . The show definitely did well among viewers seeking adrenaline-induced, fun-packed adventure. Now, as far as the next season goes, we don’t have an official announcement yet. It is too early to predict anything but a lot depends on whether PJ and Tim would want to take on the challenge again. If they are ready, we expect Netflix also to greenlight the next season. Our most optimistic guess is that ‘Extreme Engagement’ Season 2 could release sometime in July, 2020.

While we wait for an update on ‘Extreme Engagement’ Season 2 release date, check out the season 1 trailer below. If you haven’t seen the show yet head over to Netflix to catch all the episodes of the first season.