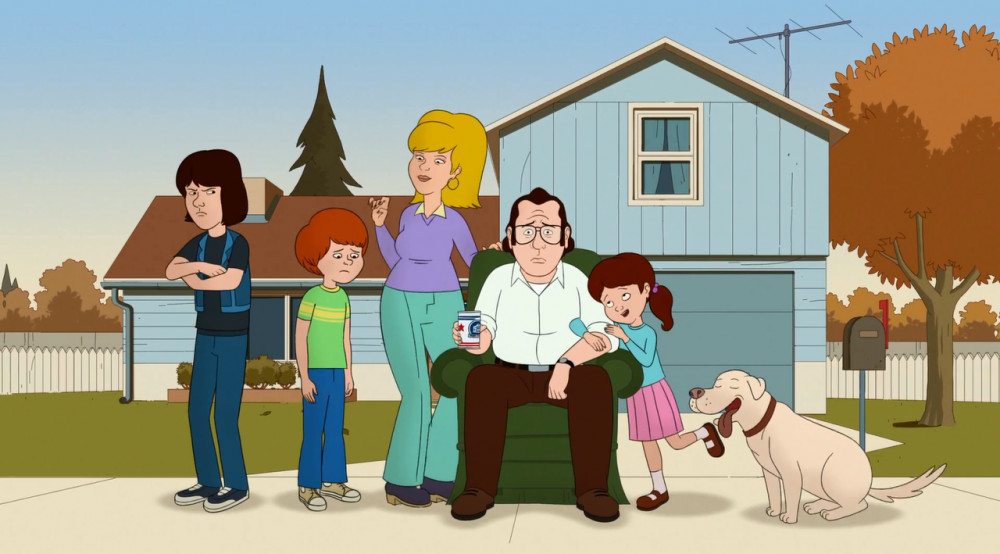 ‘F is for Family’ is an insanely popular animated sitcom created by the comedian Bill Burr and ‘The Simpsons’ writer Michael Price. It tells the story of the Murphys, a somewhat dysfunctional Irish-American family living in the 1970s. The show has received critical acclaim and has a huge fan following around the world. Season 1 of the show premiered on Netflix on December 18, 2015. A year and a half later, on May 30, 2017, ‘F is for Family’ made a return to viewers’ screens with Season 2. Subsequently, on June 28, 2017, the show was renewed for a third season, which premiered one-and-a-half years later again, on November 30, 2018.

Recently, on January 24, 2019, Netflix announced that ‘F is for Family’ had been renewed for a fourth season. However, no dates for the premiere of Season 4 has been released as of now.

F is for Family Cast: Who is in it?

Bill Burr stars in the lead role as Frank Murphy, a short-tempered Korean War veteran, navigating the suburban life. His character is prone to profane rants and emotional abuse and the concept of political correctness has no meaning to him. His favorite pastime involves sitting in front of the television and drinking beer.

Joining Burr is Laura Dern, who plays Frank’s wife Sue. Justin Long will be back to play the Murphys’ rebellious 14-year-old son Kevin. The teenage delinquent is a cannabis-smoking juvenile with a foul mouth, who often gets into trouble with his parents. The cast is also joined by Debi Derryberry as Frank’s little “princess” Maureen Murphy, and Haley Reinhart as the voice of Frank’s younger son Bill. Meanwhile, Sam Rockwell voices Vic, the Murphys’ loud, womanizing, drug-addict neighbor. In Season 3, Vince Vaughn joins the cast as Chet Stevenson, a new neighbor.

F is for Family Plot: What is it about?

Based partly on the life of comedian Bill Burr and his experiences while growing up in 1970s Massachusetts, ‘F is for Family’ is set in 1970s America and all that is associated with it. The show follows members of the middle-class Murphy family, all of whom have their own personal struggles to face. While beer and TV lover Frank tries to make ends meet by working at the airport, he also has to try and maintain relationships with his wife Sue, and his kids, among whom Kevin is shown to be a particularly rebellious lad. Meanwhile, other members of the family, too, have their own problems to contend with – while Sue struggles with the frustration of being a housewife, the rebellious Kevin is shown to be a chronic pot smoker who has aspirations of becoming rock musician. Frank’s other son, Bill, just wants to have fun, but has to endure the ups and downs of being the middle child. Finally, Frank’s young daughter, Maureen, has to strike a balance between her tomboyish tendencies and the expectations society places on her by virtue of her being a girl.

The personal struggles faced by the Murphys take place in the backdrop of middle-class anxiety, stagflation, and the prevalence of sex and drugs that was so characteristic of urban 1970s America. In this sense, the show is as much a period drama, as it is a family drama, and it would be fair to say that the showmakers have handled both aspects equally well. At the same time, despite the profanity and the rawness, the show also succeeds in being genuinely funny, and is also replete with ‘that’s how things were back then’ references.

While the six-episode Season 1 lays the base for the family drama, Season 2 follows the Murphy family as they fall into hardship owing to Frank losing his job. In Season 3, we see Frank getting back on his feet again, but then his relationship with his family and friends start getting strained. Interestingly, Season 3 concludes with one of the biggest cliffhangers of the show – at the end of the season, Frank’s father shows up. While we know nothing about him, except the fact that Frank hates him, it is likely that Season 4 will explore this arc, and give viewers a bit more of an idea about Frank’s upbringing.

In terms of ratings, the show has been praised by critics and audiences alike, and it enjoys an average score of 86% on Rotten Tomatoes, and an overall rating of 8/10 on IMDb.

F is for Family Season 4 Release Date: When will it premiere?

‘F is for Family’ season 3 premiered on November 30, 2018. Even though the show has been renewed, as of now, Netflix has made no official announcement about ‘F is for Family’ season 4 release date. However, keeping in mind the fact that each of the previous seasons took around a year and a half to release after their renewal announcements, it’s quite unlikely that Season 4 will be released in 2019 – based on precedents, a reasonable guess would be that it will release sometime in mid-2020.

We will keep an eye out on any news pertaining to the release of Season 4, and will update this section accordingly. So, do check back from time to time.

F is for Family Trailer:

Since Netflix has just announced the renewal of ‘F is for Family’ Season 4, the trailer for the fourth season will not be out any time soon. That said, we will definitely keep an eye out for the trailer, and will update this section with the trailer when Netflix releases the same. Meanwhile, you can take a look at the trailer of Season 3, if you haven’t, so that you can get an idea about the show and the story thus far.