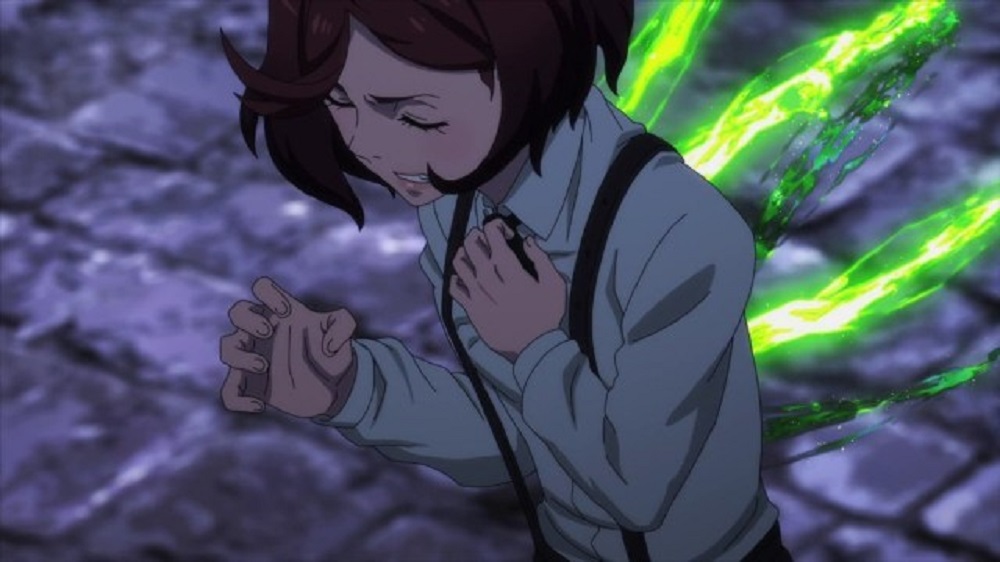 Coming from P.A Works Studio, which is known for producing some of the greatest anime shows of all time, like ‘Another‘, ‘Angel Beats!‘ and ‘Charlotte‘, a lot was expected from ‘Fairy Gone’. But unfortunately, despite having a fairly interesting premise, the anime comes off as extremely bland. On paper, it sounds a lot like a cooler version of ‘Tokyo Ghoul‘ where Ghouls have simply been replaced by Fairies. But the execution is far from perfect.

The biggest problem with the anime is that almost every aspect of it, from dialogues to the fight scenes, seems scripted and lacks a natural feel. This makes it impossible for a viewer to connect with whatever the characters are going through and what they wish to achieve through all of their actions. But despite all of its pitfalls, I would still recommend this anime to all action fans as it offers something very different from most typical anime shows that are produced these days. And because it does a show a lot of potential with its plot, I would definitely give it a second shot. Speaking of which, to know more about the anime’s season 2, move on to the next section.

Fairy Gone Season 2 Release Date: When will it premiere?

‘Fairy Gone’ Season 1 premiered on April 8, 2019 and with a total of 12 episodes, it ended on June 24, 2019. Produced by P.A Works Studio, the anime follows a completely original story and has not been adapted from a manga or a light novel. The response received for the first season has been average and even its rating on most platforms isn’t exceptionally great; but surprisingly, a season 2 of the anime has already been announced.

‘Fairy Gone’ Season 2 will premiere on October 7, 2019 and is expected to end by January 2020. The series was initially listed for 24 episodes but is now taking a “split-cour” approach. So, season 2 will basically just be the second half of season 1.

The English dub of ‘Fairy Gone’ is available on Funimation.

‘Fairy Gone’ is set in a world where Fairies exist and possess animals, giving them strange supernatural abilities. Humans use these as a weapon by transplanting the organs of these possessed animals in normal people. The humans who are being used as fairy war tools are labeled as “Fairy Soldiers”. But after the war comes to an end, most of the Fairy Soldiers lose their purpose and just start living their lives like every other human being. They are found working in government jobs and some of them even start their own terrorist organizations.

In the present events of the anime, nine years have passed since the war and an organization named “Dorothea” has been established to investigate and even suppress all of these acts of terrorism that have any Fairy links. Marlya is the main protagonist of the anime who is the newest recruit at Dorothea and has been given the responsibility to fight for justice in a post-war world. But the more she digs deeper into the world of the existing Angel Soldiers, the more she realizes that the political condition of her world is more disrupted than she could have ever imagined.

Marlya is the main character of the series who was the only survivor of Ray Dawn’s massacre of Suna Village. Her mom and dad passed away during the incident and even the person who later decided to adopt her ended up dying. Following these incidents, she was labeled as “the little disaster”. Almost no human has the ability to see fairy primordials but Marlya is one of those few rare beings who is able to see them. She is usually seen with a rifle and in order to find her lost childhood friend, Veronica, she joins forces with a mafia family. She even gets directly possessed by a fairy once and later starts working for Dorothea.

Free Underbar is a Fairy soldier from the unification war who was possessed by the most feared wolf-like Red Hood fairy. During the war, he fought alongside many other powerful fairies and after the war was over, he ended up joining Dorothea. He also worked with a mafia for a very long time but after meeting Marlya, he left that behind and worked as her partner at Dorothea. He can also wield a very strong Fairy weapon which is known as a Verosteal. In appearance, he is taller than almost all the other members of Dorothea and has short brown hair. He sports a stubbled chin goatee and can always be seen with a very intense expression on his face.

Klara is another member of the Dorothea who takes her job very seriously. She has long brown hair, deep blue eyes and sports thick-framed glasses. She has also received Fairy implants and possesses the powers of a Fairy named Tomereez. Her Fairy is really weak compared to most others of her kind and cannot be used for combat. But Klara smartly uses her abilities for infiltration and surveillance. Apart from this, Klara also works as a sniping spotter for Serge Tovah.

Serge Tovah is also a member of the Dorothea who has long messy blond hair. He often gets all flirty with his female co-workers, especially with Klara. He is also possessed by a Fairy known as Blind Tail who is a cross between centipede and snake. His fairy abilities mostly allow him to snipe with superhuman accuracy and power. Compared to all the other members of the team, he is easy-going and talks quite a lot.

Lily is the leader of Dorothea’s third unit and possesses no Fairy abilities. But despite that, she demands a lot of respect and serves as a very reliable Captain for the whole team. She has light brown hair that she ties up in a ponytail and she is usually seen with a very stern expression on her face.