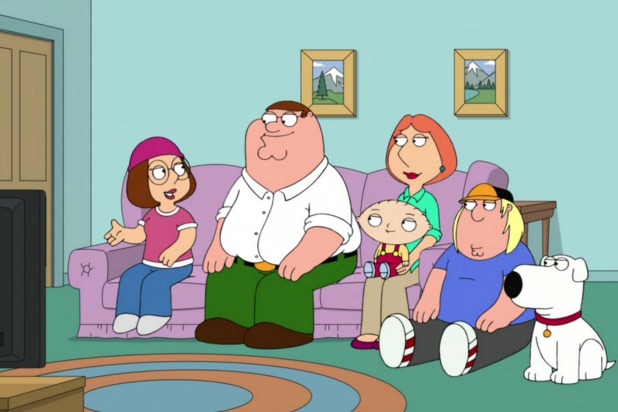 ‘Family Guy’ is one adult animated sitcom that provides its viewers with some hilariously silly, slapstick humor and social commentary at the same time. Such a tone has invited numerous comparisons between the show and ‘The Simpsons.’ However, anyone who has seen ‘Family Guy’ can tell you that it is way more raunchy, consistently challenging its appropriateness for network television.

The animated series is created by Seth Macfarlane, who is also responsible for ‘American Dad!‘ Both the shows follow a similar set-up, revolving around an eccentric Caucasian family. When it comes to ‘Family Guy,’ the series chronicles the routine misadventures of the Griffith family. Peter Griffith, a character similar to Homer Simpson heads the family. Oh, and a talking dog named Brian is also a part of the family.

Currently, in its eighteenth season, ‘Family Guy’ is known for its topical commentary on American society, apart from its laugh-out-loud humor.

Family Guy Season 18 Episode 12 Release Date: When Does it Premiere?

You can watch the twelfth episode of the eighteenth season of ‘Family Guy’ by tuning into Fox on the above-mentioned timeslot. Other than that, the show can also be watched live on FOX TV’s official website or mobile app with a valid cable provider’s login.

The eleventh episode of the eighteenth season is titled ‘Short Cuts’ and was aired on February 16, 2020. The episode sees Lois wishing to get a pixie cut. Peter is against the idea, but Lois gets one against his wishes anyway. Obviously, this leads to a hilarious argument between the two.

I could watch Peter and Lois go back and forth all day. 🤣 pic.twitter.com/hdNWRHtm7a

On the other hand, Brian finds himself becoming the talk of the town. He has become a local hero accidentally and now everyone in Quahog wants to impress him. A bunch of Rabbis, for instance, want to throw him a party. Have a look:

After hearing the news, Shredder, an old friend of Brian’s visits him. Shredder is now a successful millionaire and wants to convince Brian to get neutered! Awed by Shredder’s success, Brian decides to go through with it. However, Stewie saves Brian from being neutered. Despite that, Brian loses one of his testicles. Ouch! Well, at least Brian is not going to have to be asexual.

We gotta ball down. 😬 pic.twitter.com/vLqnBi7YVV