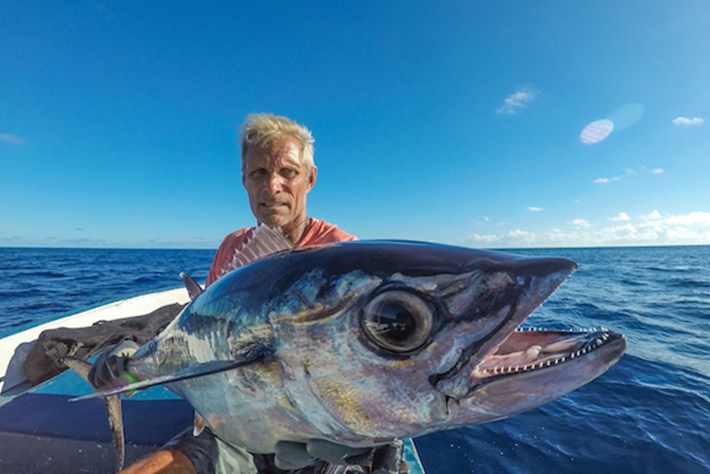 Fishing for Giants is a South African documentary TV program that first premiered on 25th April 2018 on Smithsonian Channel. The series is presented by Andy Coetzee who goes to discover elusive fishes by hunting down the notorious freshwater, Nile Perch. He travels to every corner of the world to find the rarest and the most difficult fish to find on the earth. He explores the biggest oceans, the turbulent waters of the Nile River, treacherous rivers, the muddy green ocean off the Gabon coastline, explores undiscovered regions of the Indian Ocean, the isolated Astove atoll in Seychelles, travels to the dangerous waters of Western Africa to find the dogtooth tuna, the giant barracuda and the Nile Perch in Fishing for Giants series. Catching the Nile Perch is one of his most sought-after dreams and can become the highlight of his fishing career. He travels to unsafe places of the world and has made an aim to catch one of the rarest great giants without caring about the dangers. The viewers will love his extreme adventures in the wild and gain knowledge about the iconic fish species that still exist in the world. He is willing to risk his own life to catch these rarest three sea monster fishes that are not easy to catch.

Fishing for Giants Season 2 Cast: Who is in it?

Andy Coetzee is the presenter of the series who is expected to return in the new season. We will update this article if we get any news about the new cast.

Fishing for Giants Season 2 Plot: What is it about?

In the first season, the travel junkie Andy Coetzee hopes to find the Nile Perch that has been on his bucket list for many years. He will go to any length to catch this dangerous fish. He also crosses deadly Nile crocodiles and territorial hippos to discover this iconic fish. In his next quest, he goes on a hunt for the Dogtooth Tuna, but to find this legendary fish, he has to dive into the high seas to reach its hidden lair. He has to cross an isolated beach and face many obstacles to find this fish. In the next episode, Andy Coetzee adds a Giant Barracuda with razor-sharp teeth to his bucket list. He puts his life on stake to hunt down this legendary fish. To find this fish, he has to cross the murky green waters. He crossed various locations in season 1 like the waters of the Nile River, the murky green ocean off the Gabon coastline, Indian Ocean, Astove atoll in Seychelles and more. He doesn’t depend on Hi-Tech gadgets or expensive machines. Instead, he relies only on his hard work, capacity, and skills. In various scenes, from staying calm in crocodile-infested waters to using worn out, wooden-spooned reel, diving deep into the seas, he has faced various dangers in each episode.

Fishing for Giants Season 2 Release Date: When will it premiere?

Here is the complete episode of The Nile Swallower from season 1. Watch the whole video on YouTube below.