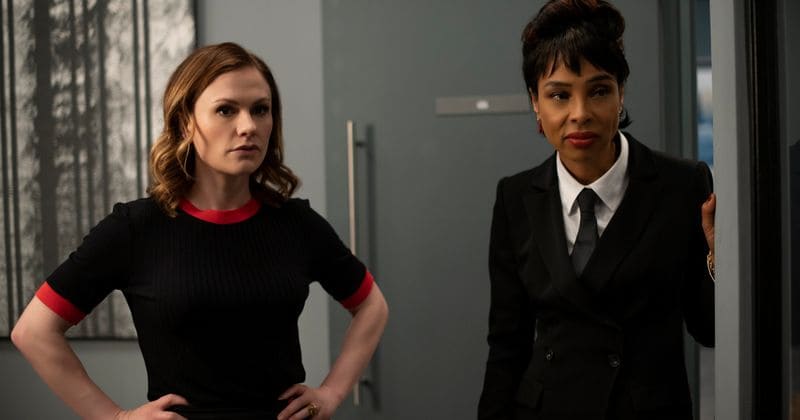 Flack is the story of an American PR executive named Robyn living in London and trying to make the best out of the troublesome situations her job occasionally lands her in. Her specialty involves cleaning after the monumental mess her hapless clients are known to create if left on their own. Robyn has full command over her professional life, working at a job she is exceptionally good at, but, try as she might, she can’t keep her personal life together which is suffering as a result of her work.

Flack first released in February 2019, on Channel W for the UK audience and on Pop Network in the US. It can also be streamed on Amazon Prime. The show is directed by Peter Cattaneo and George Kanen and created as well as written by Oliver Lansley. One of the executive producers on the show is star Anna Paquin herself.

After successful completion of the first season, here’s what to expect from Flack season 2.

Flack Season 2 Release Date: When will it premiere?

There is a distinct freshness to the plot of Flack and Anna Pacquin shoulders the series with perfection. It is one of the few successful female-led dramas on TV at the moment along with the likes of Big Little Lies, Pure, The Marvelous Mrs. Maisel, etc.

As far as Season 2 is concerned, we have good news for the fans. On August 2, 2019, Pop renewed the show for a second season. “Flack and its stellar cast, led by Anna Paquin, continues to illuminate the lengths people will go to to keep their indiscretions out of the news cycle or conversely, try to bring attention to them,” said Justin Rosenblatt, exec VP originals at Pop. “With loads of verve and vigor, there’s so much more to resolve as these characters work to fix everyone else’s problems while struggling with their own.”

Flack Cast: Who is in it?

The central character of Flack is Robyn, played by Anna Paquin, who is a publicist from America working in London for a high-end PR firm, Mills Paulson. Apart from that, she is a devoted girlfriend. She is still coping with her mother committing suicide by jumping off Brooklyn Bridge a year back. Therefore, there are cracks beginning to show in her personal life.

Caroline is played by Sophie Okonedo. She is the head of Mills Paulson. Genevieve Angelson plays as Ruth in the series. Ruth is Robyn’s sister. Lydia Wilson plays Eve who is a close friend of Robyn’s. They work together at Mills Paulson. Rebecca Benson plays Melody, an intern at Mills Paulson. Arinze Kene plays Sam, who is dating Robyn and works as a nurse. Marc Warren appears as Tom, a former drug addict and showing signs of recovery now. Rufus Jones is cast as Mark in the Flack series. Mark is Ruth’s husband.

There are several guest stars who appear in season 1, including Bradley Whitford as Calvin Cooper, Alan Davies as Dan Proctor, Amanda Abbington as Alexa, Max Beesley as Anthony Henderson, Rebecca Root as Allie Gregs and Katherine Kelly as Brooke Love-Wells.

The entire lead cast has been confirmed to return for season 2.

Flack Plot: What is it about?

Flack shines a light on the relentless world of PR that revolves around crisis management and damage control in the face of scandals that can destroy the impeccably carved reputations of individuals or organizations in the public domain. Our protagonist is Robyn, a ruthless PR, standing her ground in the cutthroat business as she helps her clients get away unscathed from the controversies they tend to create, being in the eye of the public storm. Robyn has to deal with her tyrannical boss Caroline, hedonistic colleague Eve and enthusiastic intern Melody.

Despite being at the top of her game at her work, Robyn’s personal life suffers as a result. There are drug abuse, infidelity and the suicide of her mother that follows her everywhere she goes. As the series progresses, we see Robyn try to help her sister Ruth’s husband, Marc, deal with his drug problem. As someone who is cleaning after others’ mess, she can’t help that her own life is spiraling out of control. She has a boyfriend with whom she is trying to have a baby but still sleeps with her clients behind his back. She frequents meetings at the Narcotics Anonymous to deal with drug problems. With each episode, we see the Oscar-nominated star don the hat of the unforgiving PR executive that she is as she deals with managing reputations of her clients on the brink of losing it all.

Season 2 starts off with Robyn realizing that she should get her life back on track after succumbing to a bevy of addictions in season 1’s finale. She attempts to make amends with her sister while keeping her clients from making controversial headlines. Robyn’s boss Caroline faces an unexpected surprise when her ex Neill makes a comeback. Meanwhile, Eve needs to satisfy her new client Gabriel Cole and Melody adjusts to a new life after leaving the firm.

You can check out the trailer for season 2 below. If you haven’t seen the show yet, you can watch it on Pop or Prime Video.