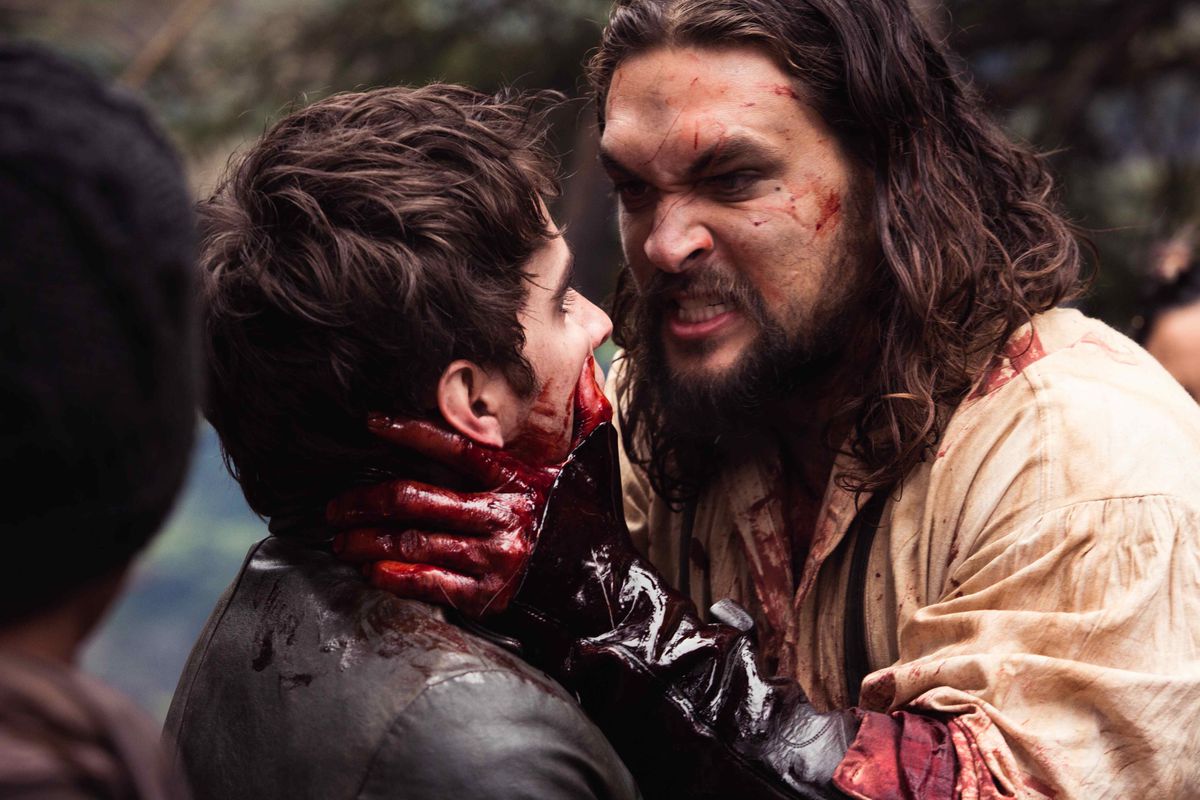 ‘Frontier’ is a Canadian historical period drama that airs on the Discovery Channel in Canada and is available internationally on Netflix. The show first premiered on November 6, 2016. It has been co-created by Brad Peyton, famous for ‘San Andreas‘ and ‘Rampage’, along with Rob and Peter Blackie.

This action and adventure show, that has elements of a western, chronicles the North American fur trade of the 1700s. It follows Declan Harp played by Jason Momoa, a part-Irish, part-Native American outlaw who is campaigning to breach the Hudson’s Bay Company’s monopoly on the fur trade in Canada.

If you have missed Jason Momoa who made his mark as Khal Drogo on ‘Game of Thrones‘ and want to see him in the forefront, participating in all the action, then you will love this series. The sets are designed meticulously to give the show an authentic feel. Naturally, it is well liked by audiences. However, critics have been a little close-fisted in their reviews, saying, “Jason Momoa’s powerhouse performance as Declan Harp is ultimately weighed down by Frontier’s often sluggish storytelling”.

Frontier Cast: Who is in it?

‘Frontier’ has had a sprawling cast over the seasons, to show how vast the fur trade really is, and how many powers are at play in this network. We have seen several characters appear and leave as the story has progressed.

In season 3, we see Jason Momoa, who now plays Aquaman in DCEU, return as Declan Harp. He is joined by Landon Liboiron who plays Michael Smith, and Zoe Boyle as Grace Emberly. Other actors who were back for the third season include Jessica Matten as Sokanon, Evan Jonigkeit as Captain Chesterfield, Shawn Doyle as Samuel Grant, Zahn Mclarnon as Samoset, Lyla Porter-Follows as Clenna Dolan, Diana Bentley as Imogen, Greg Bryk as Cobbs Pond, Breanne Hill as Mary, Paul Fauteux as Jean-Marc Rivard and William Belleau as Dimanche.

In the upcoming season, we expect the main cast to return, and they might be joined by some new faces, who are bound to make things interesting for Declan, our heroic disruptor.

Frontier Plot: What is it about?

‘Frontier’ revolves around the activities of Hudson’s Bay Company. Having monopolized the fur trade in Canada, this company engages in illegal activities to enrich themselves. However, making there is a consequence to this unethical business practice as it draws the ire of the half-Irish and half Cree native Canadian outlaw Declan Harp, who begins a vociferous campaign to breach the big company’s stronghold. In a way, there are some similarities to Tom Hardy’s ‘Taboo‘ if one considers how one man of mixed heritage stands up to big power.

The show is nothing if not sprawling, and gives us a clear picture of the many interested parties and the power struggle that was involved in the fur trade at that time. However, in some parts, it feels as though the show parades the guts, violence, and whorehouses, just to seem cool. The same cannot be said for Momoa’s performance as Declan, of course, which is the embodiment of coolness, and literally grabs your attention. There is a postcolonial angle to be considered here as Declan’s mixed heritage shows how the Canadian wilderness itself is fractured, and how the future of the indigenous people in the region might be in danger. Although physically imposing, Declan still conducts himself with a degree of quiet grace, proving he does not belong completely to any of the groups that are fighting for some amount of control.

Placing Declan and the Hudson’s Bay Company against each other, the show makes a clear ideological distinction. The former desires revenge and perhaps even revolution against the latter’s oppressive practices that led to the murder of Declan’s wife and son. If you have seen ‘Braveheart‘, you might find some aspects of the show familiar, but the way the story slowly and meticulously unfurls, introducing changing dynamics in each character, makes it a thoroughly enjoyable watch.

Variety has summed up the show well, saying, “The story of ‘Frontier’ is one of how history gets written, on the canvas of frigid wilderness, in the traces of different theories of civilization. These clashes between deerskin tunics, tartan sashes, and tailored suits mark the beginnings of globalization in the region, where brandy and beaver pelts stand-in for currency and status. It is a little too slow to be gripping, but as far as variations on the prestige drama model go, it’s utilizing those tropes in all the right ways. ‘Frontier’ privileges complication and nuance over titillation and pulp — and capitalizes on what television specifically can do in terms of telling a multi-pronged, multi-location story.”

Frontier Season 4 Release Date: When will it premiere?

‘Frontier’ Season 3 premiered on November 23, 2018, on Netflix, and on December 7, 2018, on Discovery Canada. Over the seasons, this marked the first time that Netflix aired the show before Discovery. While neither of the networks has made any official announcement of the fourth season, Momoa has hinted that another season is on the way, and his message which asks Declan to rest in peace leads us to believe that this could be the final season of the show. Based on everything we know, we expect ‘Frontier’ Season 4 to release sometime in November, 2019.

While we wait for ‘Frontier’ season 4, check out season 3 trailer below. If you have not seen the series, then head over to Netflix to catch all the episodes of the previous seasons.