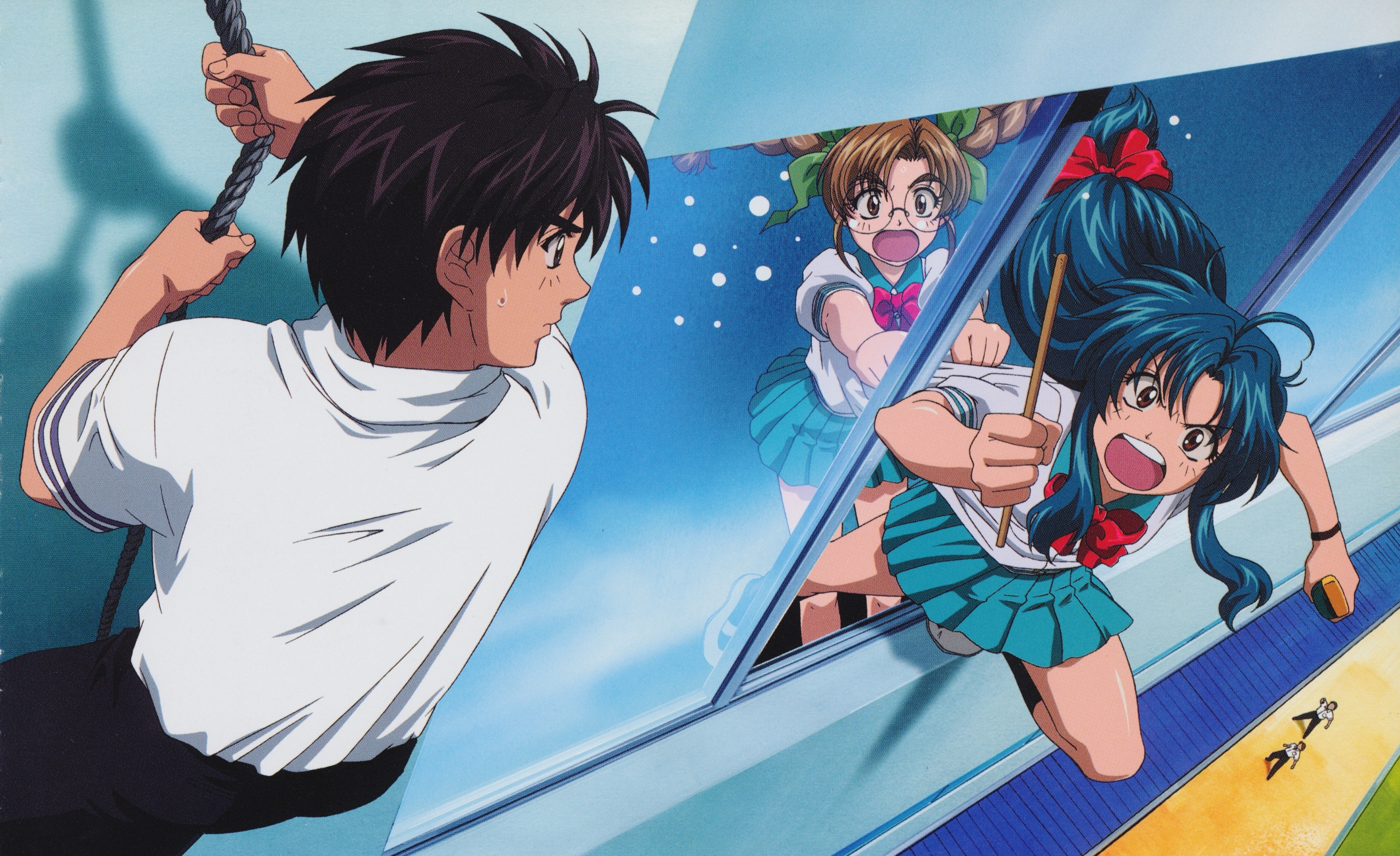 ‘Full Metal Panic? Fumoffu’ is more of a side story anime to the ‘Fullmetal Panic’ series. And though it has its own original storyline, being familiar with the characters of the show before you watch it can make this one even more enjoyable. This side story is very different from the main one and barely has any of the mecha aspects that the original one has. ‘Fummoffu’ focuses more on the wacky high school adventures of the two main characters who have a brief appearance in the main series. It is full of high-class comedy and does not really have an overarching plot. Each episode is divided into two halves where each of these halves has a different story. So all in all, ‘Full Metal Panic? Fumoffu’ brings in 24 unique stories that are not related to each other and the only thing that’s common between all of them is the cast.

Now coming to the artwork of the show, the name “Kyoto Animation” is enough to tell you that the visuals are highly impressive. The detailing on the character expressions is just amazing and contributes to the comedy scenes of the show. Pretty much everything about it is great but the only aspect of it that seems to be bad is its sound. The background scores are no good and almost go unnoticeable; they don’t even fit in with most scenes. Compared to the background music, the opening and closing themes are still fine and are able to hype you up for the episodes. Overall, ‘Full Metal Panic? Fumoffu’ is the perfect anime for those who love the characters of the main series and enjoyed the comedy element in it. Even if you haven’t seen the main series, you should definitely give this one a try.

‘Fullmetal Panic Fumoffu’ Season 1 premiered on August 6, 2003 and ran until October 18, 2003, and consisted of a total of 12 episodes. Now this version of the anime was extremely popular and was also very well accepted by most fans. I say “version” here because ‘Fullmetal Panic? Fumoffu’ is actually not the parent story anime adaptation of the light novels; it is just a side-story. In fact, this “season” has little to no relations with the main anime, ‘Fullmetal Panic!’. It revolves around an entirely different story that can even be enjoyed by the ones who have never seen the main anime adaptation.

Though most fans would love to see a whole new season of this version of the show as well, it seems like renewing it was never the intention of the creators in the first place. The companion series fits right between the events of the first season of the show and ‘the Second Raid’. This means that it pretty much covers every single thing that the story had to offer within that span. So a new season of the anime does not really make sense. But this surely does not mean that the show has come to an end. To know more about the anime’s future, you should check out our preview of Fullmetal Panic. Meanwhile, if anything changes and we come to know about ‘Fullmetal Panic Fumoffu’ Season 2 release date, we will update this section.

A pretty good English Dubbed version of ‘Fullmetal Panic? Fumoffu’ is available on Funimation and Amazon Prime. You can also watch it on Hulu with its original Japanese audio and English subtitles.

‘Full Metal Panic? Fumoffu’ has been adapted from the novels 1,3, 5 and 6 of side story light novel series ‘Full Metal Panic! Tanpenshuu’, which is illustrated by Shoji Gatoh. Episode 9 of this season is adapted from a different side story novel, which is titled ‘Full Metal Panic! Side Arms’. The story of ‘Full Metal Panic? Fumoffu’ revolves around the insane adventures of Kaname Chidori and her war-freak classmate/best friend Sousuke Sagara. Studying in Jindai High School, Kaname gets into a lot of trouble and that’s when Sousuke takes up the disguise of a gunslinging mascot named Bonta-Kun. The two struggle to live their lives as normal high school teenagers and while they are going through all of this, Sousuke’s superior officer, Teletha Testarossa, decides to take a vacation from Mirthi to spend some time with the two of them at their school. Now it’s on Sousuke to protect the senior officer while he is there with them.

Kaname Chidori is the female protagonist of the show who is a very kind girl and pretty much everyone looks up to her. She has long dark blue hair that she keeps tied up with a red colored bow and has brown eyes. Her father used to work as a UN official and because of this, she has spent a major part of her childhood in the US. Although she is really outgoing, people consider her to be too American for Japan and at the same time, in America, she is considered to be too Japanese. This results in her getting bullied in both of these nations. Even after all of this, she tries to be confident about herself but often lashes out on people who make fun of her. But later, after she joins the Junidai High School, people start accepting her and begin to respect her for who she is.

She later meets Sousuke, a transfer student, and feels really attracted to him. Sousuke turns out to be a misfit and this leads to some really awkward romantic situations between the two. Later, she finds herself in a love triangle situation and that’s when she learns that her insecurities have always been her way when it comes to looking for affection through relationships. She lives all by herself in a complex close to Sousuke’s apartment. She takes up multiple jobs to keep herself busy and even invites all of her friends to join her.

Sousuke Sagara is the male protagonist of the series who has been brought up in the most war-torn regions of the world. He has medium height and sports short spiky brown hair. He has a lean muscular build and has an x shaped scar on his lower chip. He’s an extremely good-looking guy but because of his upbringing, he lacks social skills, wears shabby clothes and even blows up college buildings. Because of all of these dangerous traits, he is infamous amongst the girls of the school. Even the smallest things are enough to trigger him and that’s when he starts lashing out on everything and everyone around him. He realizes that he suffers from serious problems and that’s why he rarely trusts himself around other people.

He is always on the edge and once he loses it, he destroys everything in his way with his weapons. However, deep inside he has a really good heart and his better side gets revealed later on. He even makes an attempt to help people whenever he can but this does not usually work in his favor. Later in the series, Chidori helps him understand his own feelings and he learns to control all the anger that has been trapped inside him since his childhood. He becomes really protective of his friends and would do anything to keep them safe. He is also quite hardworking and proves that once he puts his mind into something, no one can stop him from achieving what he wants.