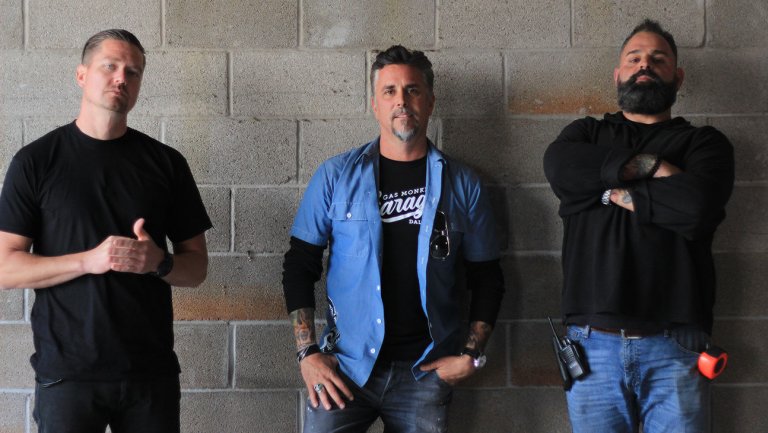 The show began as Richard Rawlings’ dream which he transformed into a full-fledged business empire. He built what is one of the most famous car restoration shops from the Dallas-based Gas Monkey Garage which bolstered his experience in the arena. Today, his days are dedicated to aiding struggling garages that are looking for a transformation.

Garage Rehab Cast: Who’s in it?

Richard Rawlings is the brain behind this whole endeavour. He has an acute business sense and has always been passionate about cars and bikes. He fell in love with vehicles because of his father, and one of his early memories is of sitting in a Volkswagen pedal car. Richard bought his very own first car only at the age of 14. He has a lot of experience with transcontinental road rallies, he has won the Gumball 3000 and the Bullrun – two times. He is also the current world record holder in the Cannonball Run and was recognized by Jay Leno for this spectacular achievement, as he broke the record that stood since 1979. He has covered the 2,811 miles from New York to Los Angeles in 31 hours and 59 minutes with a speed of 87.6 miles per hour.

Russel Homles is the muscle behind the project. He has over twenty years of experience in construction and has dealt with every problem that the field has to offer. He also owns his own construction business and has over 100 men in his crews. He is a car enthusiast who has helped a lot of people build custom garages over the years. Russel has also worked as a mechanic for years which helps him be an asset to the team. Chris is the hustle of this endeavour; he is responsible for taking the vision that he is presented with and finding ways to make them a reality. He is efficient and makes sure that every piece of equipment is apt and meets his approval. Chris is a shop owner and is always looking forward to improving the service of the shops. He helps Richard with improving the profitability of the garages that Richard has invested in.

Garage Rehab Plot: What is it about?

The show follows Richard, Russel, Chris who are the masters in their own respective fields as they travel across the nation to select garages that have the potential to make it a bug but need help doing that. They help the owners of these garages by taking over and revamping their business, so it gives a much better profit. When asked Richard in an interview about what satisfies him in his job he said,” I get great satisfaction helping these shops we’re visiting, helping them through the same mistakes I made — or better yet, helping them avoid the mistakes altogether. I know that I’ve got to do my job better and harder than anyone in that building so that everyone there can take care of their families. And that’s one of the coolest feelings for me. I employ well over a thousand people, and I take great pride in that.”

There have been some controversies about the show being heavily scripted, so much that it has been called fake by tabloids, but it has still managed to gather a fan base and is extremely entertaining especially for people who are as passionate about their vehicles as the lead cast of the show.

Garage Rehab Season 3 Release Date: When will it premiere?

After the successful run of the first season, Discovery ordered a second season that premiered on January 8, 2019. The channel has not ordered for a third season as of yet. We should hear from the channel soon regarding the confirmation of the whether the show will get renewed or cancelled. If they decide to renew Garage Rehab for a Season 3, it can release as early as July 2020.

If the channel decides to renew the show, the trailer should drop by the end of 2019. There are no trailers or teasers for the upcoming season as of yet, but you can find out what this show is all about below.