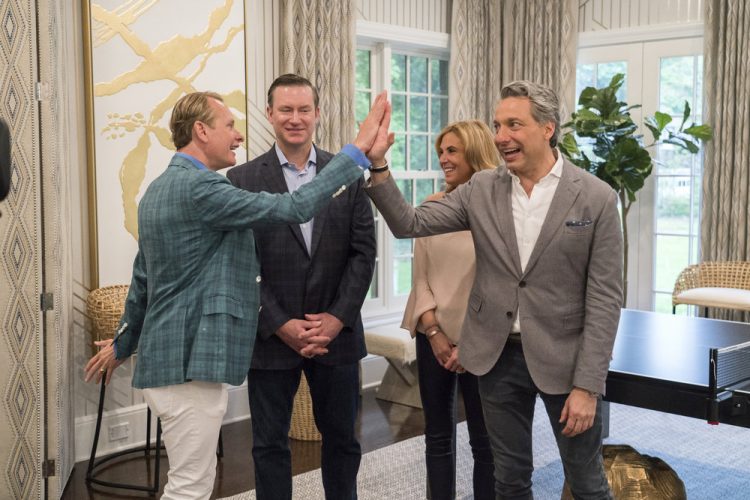 The first thing to spontaneously come up whenever there is talk of a new show centered on interior designing is just how saturated the reality TV scene of recent years seems to have become with the many slightly altered pitches for the same formula. This is the one that caters to the gradual recovery and glamourization of real estate and home improvement in a more amped up way than the traditional home improvement networks (which HGTV was in the beginning) used to approach it. In these home improvement shows, we find the carbon imprint of the same formula found in shows about almost every other bits, odds, and ends, surrounding any profession serviceable for the reality TV spice: from burger flipping to car flipping, from fashion designing to landscape designing.

And like all HGTV shows, a large bulk of these new home improvement shows can be condemned in one fell swoop to be the same thing as the house-hunting shows (Caribbean Life, Bahamas Life, Log Cabin Living, et cetera) – shows that are good only so far as there is an audience to consume this kind of content, which also makes it prolific enough for potentially twenty-odd seasons each, and therefore a lucrative cash cow for any producer.

Bravo TV has on occasions been the victim of the same pitfalls that almost comes as a package with modern Reality TV, if we treat it so critically, but Bravo has also been the beacon of uniqueness to break the formulaic pattern before it even started to become a fairly repetitive, yet functional one for networks like HGTV. Perhaps because it had the license to not cater to any strict demographic, and only the commitment to be a progressive network to speak for and entertain queer communities – in 2003, it came up with the brilliant concept of ‘Queer Eye for the Straight Guy’ (later truncated to only ‘Queer Eye’ to be more inclusive). It was to be the usual show about interior designing on the front stage (which was still quite a common genre and topic many shows had; case in point: it was the same year that ‘Clean House’ and ‘Divine Design’ had premiered). However, its twist lay in that it also sardonically dealt with the stereotype that associated queer people with a refined and heightened sense for matters of fashion and fine arts – simply by having a group of five queer interior designers plan home makeovers for straight male clients. 15 Years after its original premiere, the show had also recently had a Netflix reboot in 2018.

It was perhaps this renewed interest in the original ‘fab five’ that also prompted Bravo with the idea for another show that calls back to one of their greatest success in the genre. ‘Get A Room With Carson and Thom’, gives the two old-time Fab Five pals another show where they go around landing interior designing gigs and continue their lively banter.

Get Room With Carson & Thom Cast: Who’s in it?

The largest aspect where Get A Room With Carson and Thom deviates from the umpteenth generic show on interior designing is that interior designing is not at all its central object of focus. The limelight rather falls on its colourful cast. It is only thinly veiled as an interior designing idea show, as the clients, the makeovers, and even the elaborate makeover schemes with their many individual caveats are sidelined simply so that the small-talk between Carson and Thom can take precedence. The duo has been co-hosts, in a sense, even in the original Fabulous Five, i.e. the band of designers who are the stars of ‘Queer Eye’, and their dynamism and chemistry carries over to this show as well. If season two is unveiled, therefore, we are sure to see the two back in the hosting roles again.

Get A Room With Carson & Thom Plot: What is it about?

Each episode of Get A Room With Carson & Thom usually starts with a commission from a new client, who are often couples trying to get a makeover of their dream home, but also sometimes people who want a certain personality or vibe added to their interiors, tailored to suit their vocation or personal space.

Get A Room With Carson & Thom Season 2 Release date: When will it premiere?

Get A Room With Carson & Thom season 1 premiered on October 19, 2018. With no updates on a new season on the producers’ or network’s account till date, we can safely assume that production has not started yet for season 2. Therefore, we can conclude that the show has not been officially renewed yet. But going by the previous season’s release date, our best guess would be that Get A Room With Carson & Thom season 2 will premiere sometime in October 2019.

Get A Room With Carson & Thom Trailer:

With no confirmation so far, it leaves us with no teasers, trailers, or other promo materials to indicate an upcoming season.  Fans can wait for official announcements regarding the future of the show while keeping their fingers crossed, and watching reruns of the original season on Bravo TV. The uncertainty about the timing of the next season’s release also means that this is a great time to get up to speed and dig into the show if it has appealed to you. If you want to get a sneak peek into it, you can watch the official trailer for the debut season here, which gives a pretty accurate gist of what it is all about.