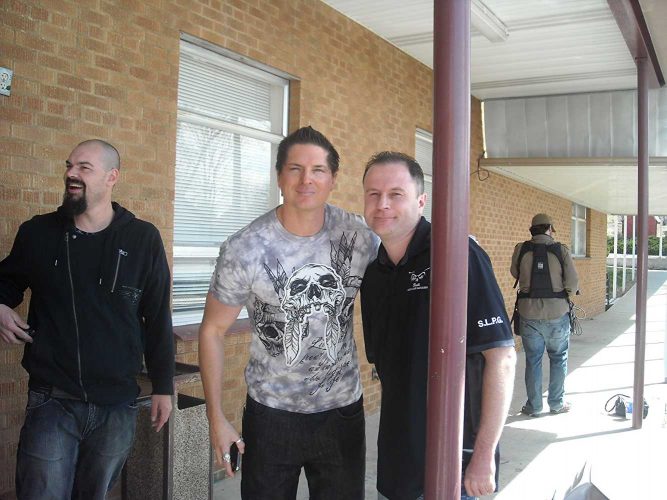 Ghost Adventures is an American suspense paranormal drama television series written by Zak Bagans, Devin Lawrence as well as Jeff Belanger and created by Zak Bagans. The series first premiered on 17 October 2008 on Travel Channel. The series is produced by MY Entertainment and Tupelo-Honey Productions.

The show chronicles the journey of Zak Bagans and Aaron Goodwin who go ghost hunting in haunted locations to investigate any paranormal activity. They arrive in various locations which are reported to be haunted by the residents. The series is also narrated by Zak Bagans. The series, since its inception, has been filmed in numerous locations like the United States, Italy, Romania, Canada, United Kingdom, Mexico, Ireland, Jamaica, and France.

The show is shot in a documentary style where the investigators also try to gather auditory evidence and collect visuals of any paranormal sightings. In each episode, the team investigates the location with its caretakers or owners. The narrators take interviews of people who have witnessed such paranormal activities. The team marks the place with a grey or black tape (symbol X) where some serious paranormal activities have been reported. At night, they return to the location to put up static night-vision cameras and record any abnormalities.

Ghost Adventures Cast: Who is in it?

Ghost Adventures Plot: What is it about?

In one of the episdoes, Zak and his crew head to the Idaho State Reform School which has a dark past. After the lockdown, from dawn to dusk, the team members gather proofs and other evidence. They try to uncover the reason behind disembodied voices and weird activities which seems to be going around for some years. Some crew members revealed that they felt some invisible force hitting them in the school.

In another episode, Zak and his crew head to San Francisco to film any paranormal activity at the historic William Westerfeld House. The house is said to be the host to satanic rituals by Church of Satan founder Anton LaVey as well as underground occultist filmmaker Kenneth Anger. In the next episode, the crew head to Oakdale in California to investigate demonic energy that has been making the home unsafe for a grieving family. As the home gets locked down, the crew gets charged up to investigate the sinister energy. After a while, Jay sees a door open by itself and feels negative energy around himself. Aaron and Billy begin to panic when they sense someone else in the room.

In the next episode, Zak and the crew travel to Eureka, Utah. They try to investigate a mining camp where people have witnessed some sightings in the haunted buildings. A special guest investigator also accompanies the team in the lockdown. Later on, the crew finds horrifying proof that scares everyone. In the next episode, Zak and his team head to Fontana, California to examine a suburban home. The family members of the house have stated that their house is possessed by a demon. After the lockdown, the crew gets shocked after receiving a satanic message through a child’s play toy by the demon.

In the last episode, Zak and the team visit Plane Graveyard in the March Field Air Museum in Riverside, California. The employees report to the crew that they have heard weird voices, as well as felt spirits, move through their bodies. Some have also reported that they have seen artefacts move on its own.

In season 18, Zak and his team travel to Las Vegas to capture paranormal activities prevalent at Freakling Bros Trilogy of Terror, the city’s oldest gentlemen’s club, a former casino and other shady places. Freakling Bros Trilogy of Terror is said to be one of the most haunted attractions in Las Vegas. Some of its employees have seen violent demonic entities and have had brushes with a shadowy figure.

Ghost Adventures Season 19 Release Date: When will it premiere?

Ghost Adventures season 18 premiered on February 23, 2019. As far as the next season goes, we don’t have an official announcement yet. Though considering the popularity of the show, we would be surprised if it doesn’t get another season. Our best guess is that if the show does get renewed, Ghost Adventures season 19 can release sometime in February 2020. We will update this section as soon as we hear more.

Ghost Adventures is such a successful show that the makers don’t feel necessary to release any trailers. Here’s a teaser from one of the previous seasons: