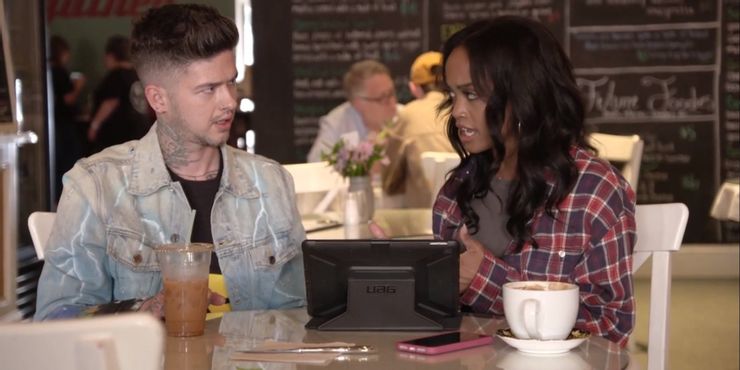 MTV’s ‘Ghosted: Love Gone Missing’ makes its premise pretty clear in the title itself. The show follows desperate people whose hearts have been broken by someone who had ‘ghosted’ them. The missing person may be anyone: a lover, a dear friend, or a family member. However, MTV’s reality drama helps these distraught individuals in getting closure — by tracking the culprit and enabling the victim in confronting the ‘heart-breaker’. After a decently successful inaugural season, the channel renewed ‘Ghosted: Love Gone Missing’ for its second edition — which features a changed format, owing to the COVID-19-induced production shutdowns. And here is everything you need to know about it.

Rachel Lindsay and Travis Mills, hosts for season 1, return to headline the second iteration as well. An attorney, media personality, tv host, speaker, and podcaster, Rachel is notable for her podcasts ‘Higher Learning with Van Lathan and Rachel Lindsay’ and ‘Bachelor Happy Hour’. She additionally serves as a guest host in ESPN’s ‘First Take’ and has been the star of ‘The Bachelorette’ season 13. On the other hand, Travis is a recording artist, actor, and host who presents his titular radio show on Apple Music Beats. He is also known for his podcast ‘ADHD with Travis Mills’. The popular performer and songwriter, has additionally released multiple hit albums and singles.

As for the couples, some of the names featured in season 2 are Shannon and Jay, Mariah and James, Joanna and Aaron, and Andi and Dade, among others. While Jay ghosted Shannon before their weekly date night, James quit his job at the workplace where he had fallen in love with Mariah. Joanna’s heart was shattered when Aaron disappeared without a trace. Finally, Dade ghosted on Andi after their relationship turned really serious, with Andy even meeting Dade’s family and friends. The second season will follow each of these distraught singles as they appear in the show to seek closure and answers.

What Can Ghosted: Love Gone Missing Season 2 be About?

The entirely self-shot and remotely filmed season 2 marks the return of ghostbusting co-hosts Rachel Lindsay and Travis Mills — as they use their expert internet sleuthing skills to help individuals in tracking down their ghosts and finally get the closure that they need. As outlined by MTV’s press release: “With the rise of social distancing, people are stuck in their homes and seeking ways to rekindle connections and gather information on their loved ones who may have ghosted them without notice.”

Read More: Are Lauren and Derek From Catfish Still Together?