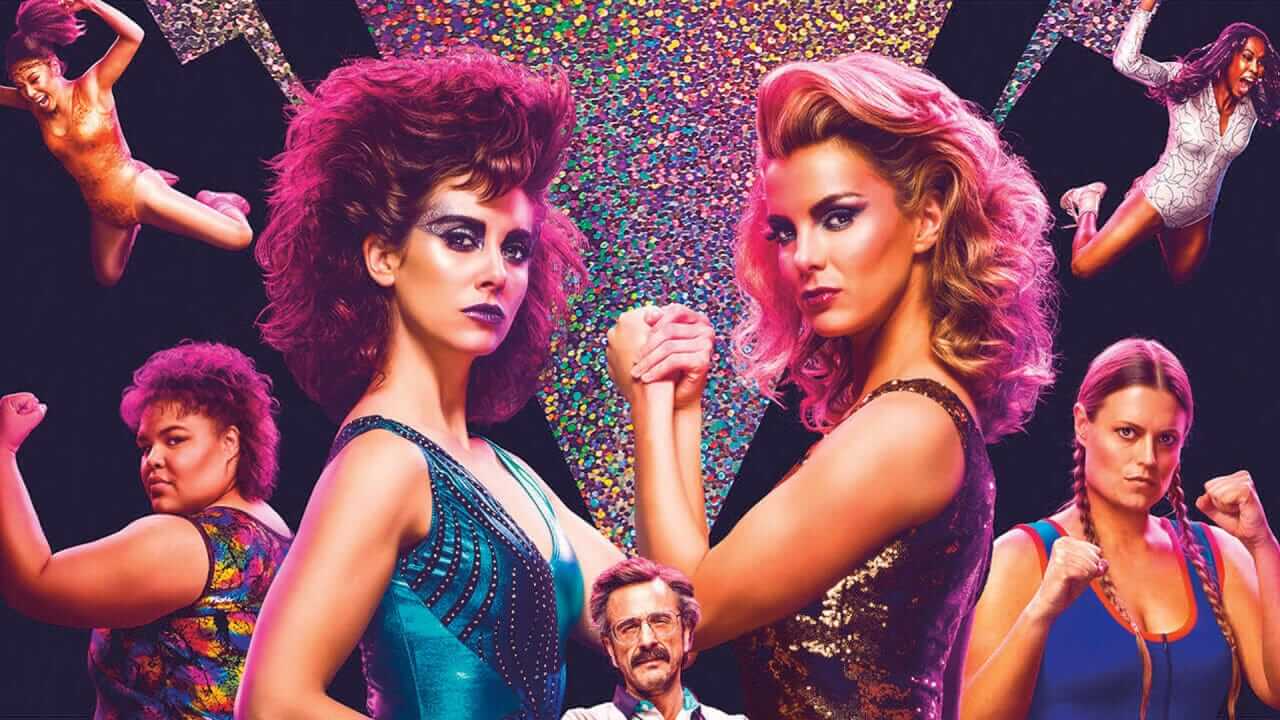 ‘GLOW’ is an American comedy-drama web television series that airs on Netflix. The show first premiered on June 23, 2017 and has been created by Liz Flahive and Carly Mensch. It is based on the gimmicks of characters who were involved in the 1980s syndicated professional women’s wrestling circuit, called the Gorgeous Ladies of Wrestling or GLOW, which was founded by David McLane.

Take every ’80s film and roll them into one, then inject the diverse casting and perspectives that all of those films were sorely missing, sprinkle on some amazing fashion and music, serve with some fearless subject matter (storylines covering miscarriage and abortion, misogyny, anxiety. racism and infidelity) and you get ‘GLOW’! Naturally, fans have taken to the series like a fish to water. Moreover, the critics have lauded the show too, praising its style of writing, its attention to detail, especially considering it is a period piece. They have also been quick to point out how the show adds a layer of drama expertly to the plot, without losing its self-effacing and delightful humor which borders on silliness. The show has had three successful seasons so far. Here’s everything we know about its next season.

GLOW Cast: Who is in it?

All the main cast members are expected to return for if and when there’s season 4.

GLOW Plot: What is it about?

‘GLOW’ explores the 80s era phenomena of professional women’s wrestling. The show takes a close look at the women involved in this Los Angeles based organization, and lays bare the details of their personal and professional lives for a dramatic impact. The series is breakthrough in the very fact that they portray women of all shapes, sizes, and color, throwing off all vanity and slamming them into each other.

The fictionalized account starts when the alcoholic and misogynist director, Sam Silvia, whose dreadfulness is captured excellently by Marc, begins circulating a rather unconventional call. Women are to attend a mystery audition in a gym that is out-of-town. Brie’s Ruth Wilder attends this call and unsurprisingly finds herself among women who could not make it in Hollywood, all waiting around, wondering if this could be their big break.

Ruth finds her break right before she believes that she will be excluded from the audience when her friend Debbie arrives. She accuses Ruth of sleeping with her husband. It is the stuff that fake wrestling stories thrive on, and of course, Sam realizes this and pushes both of them to the forefront. As the women fight each other, both get the limelight, but their friendship begins to come apart. Over the episodes, we realize that Sam too has a past and it might catch up with him, while the narrative keeps progressing smoothly to give all the other women the chance to slowly come to the forefront.

Season 3 opens with GLOW’s opening show at Fan-Tan casino in Las Vegas and ends with the team performing “A Christmas Carol” in the ring. If season 4 is commissioned, it might pick up on the new partnership that Beth and Debbie have struck. There are plenty of other loose ends that the show would like to tie up in the next season.

Is GLOW Worth Watching?

Absolutely! What stands out about the show is the realistic portrayal of women. While women’s wrestling, I mean fake wrestling, is often the object of the male gaze, this show does not hold back in portraying women in all their naturalness, removing any hint of sexualization. These magnificent women had to learn wrestling moves for the show so that their staged fights could look ‘real fake’ and not the kind of fake one would get using body doubles. Overall, there are some clichés of misogyny like the rich man with his Malibu house, but when the story starts, the women take over. Overall, the series manages to be gripping, smart, funny, and snappy at the same time.

The narrative continues to take new bolder directions over the seasons as it focuses more on the trials and tribulations of the characters. Mensch, one of the co-creators, said as much, stating, “The more seasons we go on, the further we go from the original [GLOW], and that’s based on the fact that we created very different characters and now we follow our characters.” Her fellow show maker, Flahive added, “We have some character arcs and ideas. It’s enough to hold on to and enough to drive forward, and yet there’s a lot of stuff that feels incredibly open as we build.”

Overall, we get the sense that the idea is to explore each of the women’s stories individually, and Brie has already expressed her intention to remain on board as long as the show runs. Notably, for a show that is predominantly full of females behind and in front of the camera, right before the #MeToo era, is a statement in itself, and ‘GLOW’ lives up to the high standards of artistic and social expectations.

GLOW Season 4 Release Date: When will it premiere?

‘GLOW’ Season 3 premiered on August 9, 2019 on Netflix. As far as next season goes, we have good news for the fans.  Encouraged by the response that the show has received over last three seasons, Netflix, on September 20, 2019,  renewed the show for a fourth and final season. If everything goes as expected, our best guess is that ‘GLOW’ Season 4 can release sometime in August, 2020. We will update this section as we hear more.

While we wait for an update on season 4, check out the season 3 trailer below. If you haven’t seen the show yet head over to Netflix to catch all the episodes of the previous seasons.