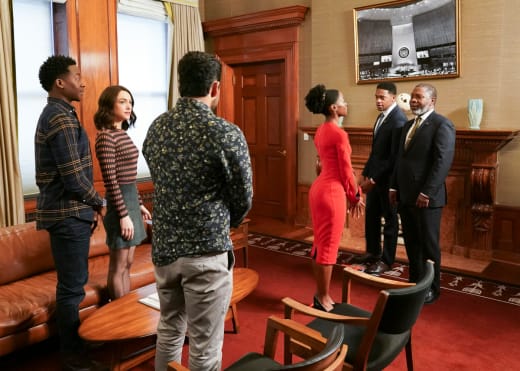 ‘God Friended Me’, CBS’ brilliant comedy, is finally back after a lengthy hiatus. Following the 12th episode called ‘BFF’, which aired on January 12, 2020, it landed with its 13th episode this week on February 16, 2020. In episode 12, we witnessed one of the most-awaited events of the season, i.e Arthur and Trish’s wedding! And this Sunday, the story takes off from right where the previous episode left off.

For fans who are done with episode 13, here’s the good news. The show won’t go on any more breaks and will resume its regular, weekly schedule. So, let’s get into the details of the next episode. Read on to know how and where you can watch ‘God Friended Me’ season 2 episode 14.

Its official synopsis goes as follows: “Miles is confused when the God Account sends him his own name as a friend suggestion. But when Rakesh discovers that Miles’ Facebook account has been cloned and the suggestion was for the fake account, they turn their attention to the hacker, Zack (Chosen Jacobs), a teenage computer prodigy. Also, Ali begins fertility treatments in an effort to freeze her eggs before beginning chemo.”

Where to Watch God Friended Me Season 2 Episode 14 Online?

Episode 13, called ‘The Princess and the Hacker’, delivers yet another splendid storyline from this series. Packed with some vibes of Valentine’s Day, it follows Miles, Cara, and Rakesh as they concentrate on the new friend’s suggestion and spend some time with one another. We come across a character named Lulu, who first pops up on Rakesh’s soulmate app and then the duo quickly hits it off. They even go on a lunch date and later, she comes up in Miles’ friend suggestion.

Lulu is a princess from the kingdom of Longo and is too similar to Rakesh. She then seeks help from the God Account when she finds out that her father is not willing to let her become the first female leader of the country. Her brother Zane also betrays her.

Meanwhile, Ali decides to put her cancer treatment on hold, which is risky for her survival. Her first priority is to have kids, a thing that both Arthur and Miles disapprove of. But finally, they end up supporting her choice. Even Miles and Clara’s relationship is going through a rough phase since the latter decided to take a break on account of his ongoing responsibilities toward the God Account.

While Rakesh helps Lulu to fight for her rights, Lulu helps him realize that he would be fine without Jaya. And we know this is a good decision right? After all, Jaya, unlike Lulu, has not proved herself to be willing to take all risks in order to be with her man.