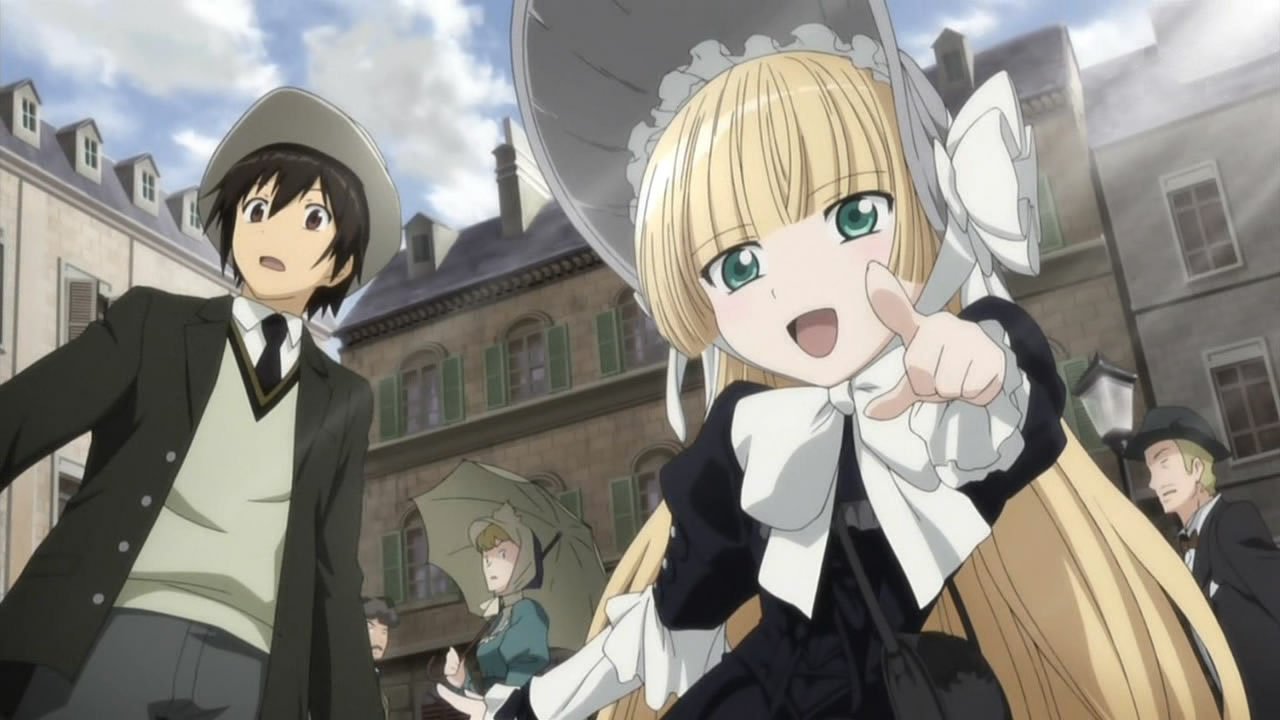 Detective stories will probably never go out of fashion. But the problem with that is they are so common these days, most creators have a hard time bringing something new to the table with them. Some creators just choose to leave a lot of loose ends so that the viewers can simply use their own interpretation of things to unravel all the mysteries of the story. Meanwhile, there are others, that are driven by some really complex plots and have this one revelation episode where the entire story is interwoven to make sense out of it.

Based on a manga that goes by the same name, ‘Gosick’ is an anime series that set in a fictional European Country. It brings in references and parodies to the most renowned detective stories like Sherlock Holmes, Miss Marple and even Inspector Morse. And to put it simply, ‘Gosick’ which is more like a play on the word “Gothic“, is purely anime heaven for those who love Mystery Shows. The basic premise of the anime is simple yet very interesting and is enough to get the attention of most viewers from the beginning itself. But it’s a little unfortunate that, unlike most other great Detective Shows, the story in this one moves ahead too linearly. This makes a lot of it quite predictable and because of this, many major plot points of the story seem forced.

Like most anime adaptations of manga, ‘Gosick’ fails to portray all the contents of its source material and undoubtedly, this has an impact on the overall quality of the story. Also, if you’ve read the manga, you’ll realize that many elements of the story lose their sense of “mystery” once they are converted to an image format. It’s easy to foreshadow a lot of key plot points to the background when it comes to writing but when the same thing is depicted on the screen, it takes a whole new turn. But setting aside all flaws, ‘Gosick’ really excels at showing its classical European themes in everything from the characters to the backgrounds to even the music and a spirit of the tradition of the 1920s reflects. Though the animation is not bad at all, I feel Studio Bones could’ve done better than what they did with this one. Overall, despite all the flaws, ‘Gosick’ is surely an above-average anime and turned out to be much better than I had expected it to be. Definitely recommend to all mystery anime lovers.

Gosick Season 2 Release Date: When will it premiere?

‘Gosick’ season 1 premiered on January 8, 2011 and went on for 24 episodes till July 2, 2011. The first season, which was divided into two different parts, was viewed by many different viewers and surprisingly, it even gained an above-average rating on some of the most renowned anime platforms. So considering this, the anime surely deserves another season. But not everything is in its favor.

The ending of season 1 was quite conclusive and though a lot of fans were not too satisfied with it, it did not end with too many loose ends that could potentially direct us towards the possibility of its renewal. And now that almost a decade has gone by since its initial release, even the hype around the show has slightly faded away. While there are a lot of anime shows that get new seasons even after a whole decade, ‘Gosick’ does not seem to be one of those series. So as of this publication, there are no official confirmations regarding its season two and even the chances of getting one seem low. In the unlikely scenario of the anime getting renewed, our best guess is that ‘Gosick’ season 2 release date could be sometime in 2022 or 2023.

‘The English Dub of ‘Gosick’ is available on Funimation and Amazon Prime Video. You can also stream it on Crunchyroll with its original Japanese audio and English subtitles.

‘Gosick’ revolves around Kazuya Kujou who is a foreign student at the Saint Marguerite Academy, known to be one of the world’s best and also the most luxurious boarding school in the Southern European country of Sauville. Being from Japan, he has shiny jet black hair and dark-brown eyes which causes most of his peers to joke about him being the “Black Reaper”. He feels really ostracized in his school because of the nickname as, according to old folklore, “Black Reaper” is a traveler who brings death in the spring.

One day, as he makes his way to the school library to read some ghost stories, he is distracted by a strand of blond hair on the stair. The steps then take him to a large garden where he meets Victorique de Blois. He soon discovers that she has the ability to foresee the future and she had already predicted that their paths will intertwine someday.

Soon their world starts to reveal many more mysteries that were previously hidden and in the end, knowing that they’re bound by fate, the two start relying on each other for survival.

Kazuya Kujou is a Japanese teenager who leaves his home to study in Sauville. He later meets a girl named Victorique who completely turns his ordinary life upside down. He is the youngest son of an imperial soldier and has always lived his life getting overshadowed by the success of his elder siblings. He works really hard and tries to prove his own worth in this competitive environment, only to realize that the adults in the household will always look down on him and will never appreciate anything he does. This triggers him to leave the military academy he was studying in and without even telling his family, he goes ahead and joins Saint Marguerite Academy. But even after starting a new life, nothing really goes in his favor as he is not able to make new friends in his new school and is ostracized by everyone because of his appearance.  He has jet black hair with burgundy-colored eyes and he is often seen wearing the uniform of his school.

Kazuya shows a very sincere attitude towards everything that he does and unlike most other kids of his age, he takes full responsibility for his actions and is willing to live with all the consequences of his choices. Despite his misunderstandings with his family, he takes immense pride in the fact that he is an Imperial Soldier’s son. He even follows the code of honor most of the times. But sometimes, he completely loses it when he’s really angry and ends up hurting the feelings of others by insulting them in the worst possible ways. When it comes to solving mysteries, Kazuya is able to recollect important details that are necessary but outside the whole mystery-solving business, he struggles to remember the simplest things.

Victorique de Blois is a 15-year-old girl who studies at the Saint Margurite Academy and spends most of her time at the school library. She is a very mysterious person but as Kazuya starts to spend more time with her, he starts uncovering who she truly is. And the more he knows her, the more he starts to fall in love with her. Victorique is a petite girl with almost doll-like features. In the subbed version of the anime, she sounds exactly like she should but in the English dubbed version, she has a very mature voice which does not really suit her personality. Despite being a student, she never really wears the school uniform and instead sports black Victorian dress with laces and frills. Even as a child, she looked pretty much the same except for her change in expressions that seem more mature now.

A lot like Sherlock Holmes, she appears to be smoking a blue and white porcelain pipe that she uses when she’s in some deep thought. But she never really smokes and only does it to appear more like a detective. Usually, supernatural beings like her die when they leave the continent but she survives because she is a mixed-blood. She is arrogant, hot-tempered and is the perfect representation of the typical tsundere character. But along with this, she also has this strange supernatural charisma that she uses for manipulating others into doing what she wants them to do. She often comes off as this harsh person but she is actually just too bored with her life and only seeks different ways to entertain or distract herself. She also has social anxiety and often, she pretends to hide in a cupboard pretending to be a doll.