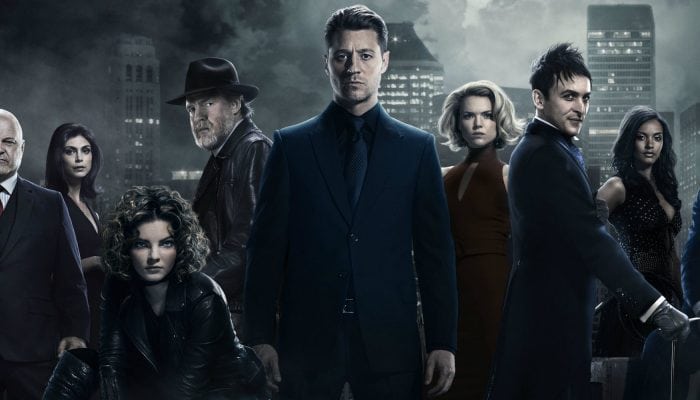 ‘Gotham’ is an American crime drama television series that airs on Fox. The show first premiered on September 22, 2014. Primrose Hill Productions, DC Entertainment, and Warner Bros. Television are the production companies backing the show. Scott White and Rebecca Perry Cutter act as producers, while Danny Cannon, Bruno Heller, John Stephens, Ben Edlund, and Ken Woodruff are on board as executive producers. The series has been developed by Bruno Heller, and the characters are based on the Batman franchise of DC Comics.

The show is mostly centered around a young Bruce Wayne as he comes to terms with his destiny as Batman, while also following Jim Gordon’s fight against crime as part of the GCPD. Overall, ‘Gotham’ has garnered a strong fan base over the seasons, and has earned praise from critics, who appreciated the novel way in which the show explored the Batman universe without showing the superhero, or making a big deal of superpowers.

Gotham Cast: Who is in it?

The main cast of Gotham includes Ben McKenzie as James Gordon. In a show where Bruce Wayne should be the protagonist, Gordon takes up quite a bit of the limelight as the seasons trace his rise in ranks within the GCPD and most of Batman’s rogue’s gallery is introduced to us through his eyes. Donal Logue plays Harvey Bullock, Gordon’s ethically conflicted partner. David Mazouz plays Bruce Wayne who really needs no introduction.

However, here we see Bruce’s early days and how they shaped him towards the destiny we all know he would go to have. Sean Pertwee plays the role of his butler Alfred Pennyworth, and this is a different Alfred than the one from the movies or the comics. Alfred is much younger and feistier here, showing traces of his military training. Chris Chalk plays Lucius Fox. The rogue’s gallery includes notable characters like Oswald Cobblepot or The Penguin played by Robin Lord Taylor, Camren Bicondova as Selina Kyle who goes on to become Catwoman, Cory Michael Smith as Edward Nygma or The Riddler, and Nicholas D’Agosto as Harvey Dent. There are several other characters since the Batman universe is vast, and ‘Gotham’ has not really held back.

Gotham Plot: What is it about?

‘Gotham’ follows a simple plot that starts off with Gordon joining the police force and being teamed up with Bullock, who is a veteran. The case they happen to catch is the murder of Thomas and Martha Wayne, Bruce Wayne’s parents. Any Batman fan will know that this murder was the turning point in young Bruce’s life, and the orphaned billionaire went on to become the caped crusader of Gotham, better known as Batman. However, the show is set in the time that is skipped in the comics. Thus, we get to see Bruce’s childhood, and viewers are taken into the immediate sense of loss that he has to cope with. This is not a hero we are looking at, this is a scared orphan, who is lonely despite all his wealth. With support from Alfred, who begins to act as a father figure, and later Lucius, Bruce finds a degree of friendship with Selina and Gordon too.

However, Gordon has his own problems as Gotham is overrun with weird criminals, some of them who will go on to become Batman’s most iconic villains. We are given backstories to Riddler, Harvey Dent or Two-Face, the Penguin, Solomon Grundy, Catwoman, Poison Ivy, Mad Hatter. We are also shown Arkham Asylum, which is enough to strike terror into any Batman fan, and there we meet Hugo Strange. The show even goes on to tease the initial stages of the serum that powers Bane. With the introduction of societies like the Court of Owls, ‘Gotham’ expertly lays out the entire criminal empire, showing how vast it is and how underequipped the GCPD are to tackle such criminals. This does not stop Gordon however, who displays integrity and becomes a major influence in Bruce’s life.

What stands out about the show is the immersive world it creates with very memorable dramatic moments. Batman has rarely had good treatment on television, leaving the iconic animated series aside. Heller makes a difference with this unique approach to the show. Despite very firmly being set in a superhero universe, the series does not tap into the overused superhero tropes, and instead shows the gritty truth of the criminal underbelly, almost making it a police procedural. The only difference here is, that we know how dangerous the villains go on to become, and the futures of most of the characters. In a masterstroke, the series also introduces Cameron Monaghan as the Joker, attempting to give a backstory to a character, whose past has remained the fodder for many a DC comic. Truth be told, Joker makes for a welcome change in ‘Gotham’ as fans immediately recognize Bruce’s arch-nemesis in the making. It also helps that Monaghan’s performance is a welcome change after Jared Leto’s portrayal of the character. As the show edges towards a finale, the series has shifted firmly from Gordon, Alfred, and effectively everyone else, and has finally come to rest on the boy who was destined to be the protagonist all along.

In the finale, we see Bruce completely embrace the life of a crimefighter for the first time, and become the vengeance, the night, the Batman.

Gotham Season 6 Release Date: When will it premiere?

‘Gotham’ Season 5 premiered on January 3, 2019. Variety reported last year that Fox made an announcement about ‘Gotham’ Season 5 being the last for the show. However, there is no reason that some other channel or platform could not pick it up as Netflix did with Fox’s ‘Lucifer‘. However, for now, it seems that fans will have to wait for’Gotham’ Season 6, which does not appear to be on the horizon.

If your heart is yearning for more backstories of the Batman universe, like ‘Gotham’, then we would recommend you check out ‘Pennyworth‘, a show that will follow Alfred’s army days and employment under Thomas Wayne. The series will air on Epix in June 2019.

Check out the trailer for Season 5 below to refresh your memories of the show.