When Does Grantchester Season 5 Release on PBS? 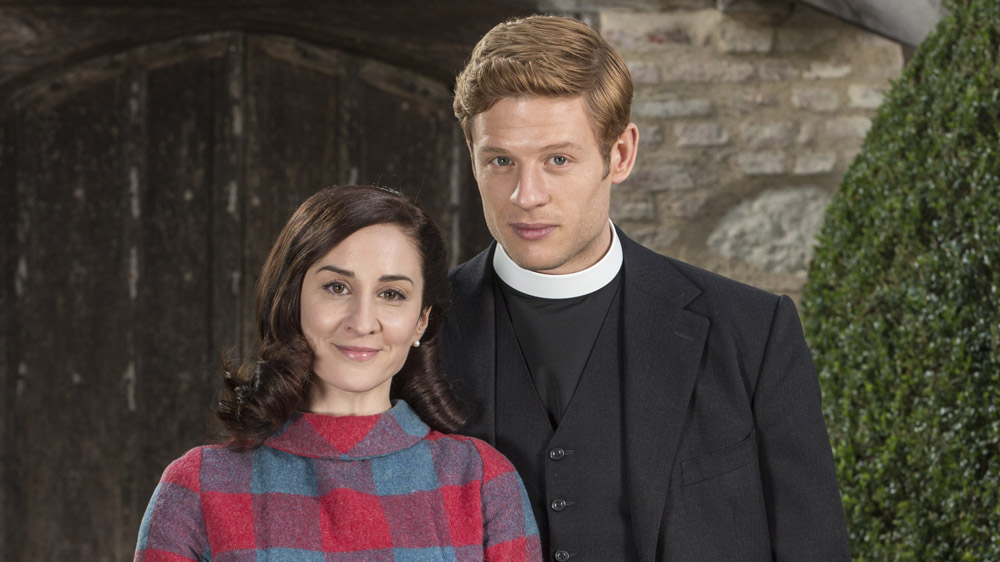 KUDOS PRESENTS GRANTCHESTER EPISODE 1 Pictured: JAMES NORTON as Sidney Chambers and MORVEN CHRISTIE as Amanda Kendall. This photograph is (C) KUDOS/ITV and can only be reproduced for editorial purposes directly in connection with the programme or event mentioned above. Once made available by ITV plc Picture Desk, this photograph can be reproduced once only up until the transmission [TX] date and no reproduction fee will be charged. Any subsequent usage may incur a fee. This photograph must not be manipulated [excluding basic cropping] in a manner which alters the visual appearance of the person photographed deemed detrimental or inappropriate by ITV plc Picture Desk. This photograph must not be syndicated to any other company, publication or website, or permanently archived, without the express written permission of ITV Plc Picture Desk. Full Terms and conditions are available on the website www.itvpictures.com For further information please contact: Patrick.smith@itv.com 0207 1573044

While crime mysteries are thrilling to watch, they generally fail to offer anything more than the crime and crime solving. Occasionally, with well-made crime mystery shows/movies, audiences get some interesting characters. That’s about the entire deal.

However, ITV’s British crime mystery show, ‘Grantchester’, tries to achieve much more, and even succeeds to quite an extent. Not only does it try to provide the thrill that a detective series generally offers, it also tries to do so with a message. The moral dilemmas the show tries to create or the philosophy that it tries to portray ends up adding to the essence of the plot and the characters. This makes watching ‘Grantchester’ a more wholesome affair than out-and-out crime mystery thrillers that don’t offer much beyond the crime and the investigation.

Season 1 of ‘Grantchester’ first made its way to viewers’ screens on October 6, 2014, on ITV. It was then picked up by PBS to air for the US audience. And since its premiere, the show has been renewed for four additional seasons. With season 5 already having concluded on ITV, here’s when the fifth edition will release on PBS.

Grantchester Season 5 Release Date: When Will it Premiere?

Grantchester Season 5 Cast: Who is in it?

For quite a long time, Robson Green and James Norton played the roles of the two main protagonists, Detective Inspector Geordie Keating, and Anglican vicar Sidney Chambers, respectively. However, Season 4 saw Norton leave after two episodes, and the duty fell on Tom Brittney to replace him as one of the protagonists. Consequently, in Season 4, Brittney took on the role of Reverend Will Davenport and replaced Chambers as the second protagonist. Season 5 marks the return of both Green and Brittney.

We also have Oliver Dimsdale as Daniel Marlowe and Jemma Redgrave as Amelia Davenport. Season 5 sees new additions in the form of Lauren Carse as Ellie Harding and Paula Wilcox as Diana.

Grantchester Season 5 Plot: What is it About?

Based on a series of crime fiction books by British author James Runcie, ‘Grantchester’ is set in 1950s England, and primarily takes in place in the village of Grantchester in Cambridgeshire. While the first three seasons of ‘Grantchester’ follow the adventures of Sidney Chambers and Geordie Keating, Season 4 changes things up a bit owing to Norton’s exit from the show.

Despite the shake-up in the cast, ‘Grantchester’ Season 4 delivers the emotional, often nerve-racking, crime-solving drama that the show is known for. After Chambers’ brief stint in the first two episodes of Season 4, the show focuses on Keating and his new clergyman-turned-investigator partner, Reverend Will Davenport. In Season 4, we see Reverend Davenport coming to terms with his new life wherein he’s not only the vicar, but also someone who is actively involved in trying to solve crimes with Keating. However, despite his initial unease, Davenport fights his own demons throughout Season 4 and finally decides to continue in the new life that he has found himself in.

This ending hints at more adventures to come for Davenport and Keating. Season 5 is set in 1957, and Will is now the vicar of Grantchester. Keating has accepted his wife Cathy’s commitment to her job. The cases covered in the fifth edition include a student’s misadventure at a local college, a hit-and-run accident, a murder in a cinema, a death at a controversial drug trial, among others.

Here’s the trailer for ‘Grantchester’ Season 5: