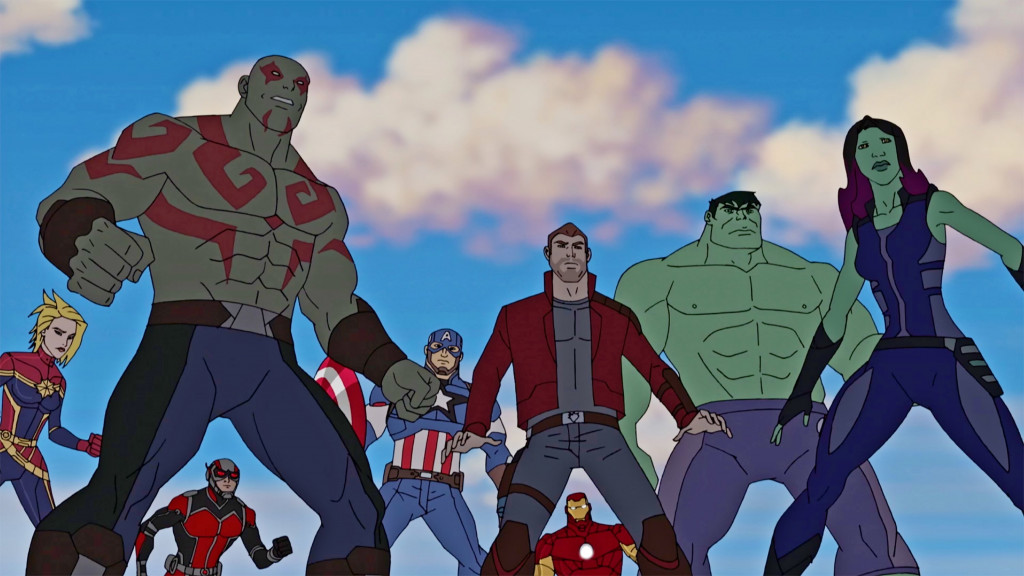 A pretty old show, ‘Marvel’s Guardians of the Galaxy’ first made its way to viewers’ screens on August 1, 2015, in the form of five shorts. A month later, on September 5, 2015, the show debuted with a full season, and received a great response from television critics and fans alike. On February 27, 2017, another series of six shorts followed, which was then followed by the release of Season 2 on March 11, 2017. Season 2 saw its conclusion on December 3, 2017, and a few months later, Disney released the third season of the show on March 18, 2018. Now, fans of the show and followers of these heroes are wondering whether ‘Marvel’s Guardians of the Galaxy’ will return for a fourth season. Here’s everything we know about it thus far.

Marvel’s Guardians of the Galaxy Cast: Who is in it?

If the show does return for a fourth season, we can expect the main cast members to make comebacks and reprise their roles. Further, there could also be additions to the list of recurring cast members since the show does not have any lack of source material and can incorporate many other characters if it wishes to.

Marvel’s Guardians of the Galaxy Plot: What is it about?

While the plot of the show revolves around the five main characters, the adventures that the Guardians of the Galaxy undertake are season specific.

In the first season of the show, the Guardians obtain an artifact called the Spartaxian CryptoCube, which belongs to the Spartax race. Inside the artifact, they find a map that leads them to a mysterious and extremely powerful weapon called the Cosmic Seed, which holds the power to create an entire universe. As the Guardians embark on a mission to find and destroy the Cosmic Seed to ensure the survival of the universe, they find themselves in a race against time against powerful adversaries like Thanos and his minions Nebula, Ronan the Accuser, and Korath the Pursuer, and other groups such as Yondu and his team of Ravagers, all of whom are searching for the Cosmic Seed to achieve their own sinister ends.

The second season picks up after the Guardians defeat Thanos and his minions and find a strange sarcophagus on Thanos’ asteroid base. Before they can decipher what the sarcophagus actually holds, it is stolen by Yondu and his Ravagers. As the Guardians travel across the galaxy looking for the sarcophagus, they also have to beat Mantis and a religious empire called the Universal Believers to the prize. Later in the season, the sarcophagus gives rise to Adam Warlock, one of the most powerful characters in the Marvel universe, and the Guardians are able to convince Warlock to walk on the right path. However, Star-Lord’s father, J’son, manages to gain control of Warlock for his evil schemes, and turns him into Magus, who in turn attacks planets associated with each of the Guardians. After an epic battle, the Guardians are able to force J’son out of Magus, turning him back into Adam Warlock. However, J’son launches an extremely powerful attack as a last-ditch effort to beat the Guardians, but the brunt of it is absorbed by Warlock, who dies in the process. The season ends with Groot cocooning Warlock till the day of his re-emergence arrives. Interestingly, an episode of the second season also saw the Avengers team up with the Guardians to fight the High Evolutionary.

The third season, also called “Mission Breakout”, pits the Guardians against the Collector and is a convoluted tale of theft, betrayal and revenge. In the third season, we also see the appearance of other Marvel characters such as Spider-Man, Max Modell, Venom, and Carnage, and even the legendary Stan Lee lends his voice in a cameo.

As far as reception is concerned, ‘Marvel’s Guardians of the Galaxy’ Season 1 received a great score of 86% on Rotten Tomatoes, and the show boasts a good overall rating of 7.5/10 on IMDb.

Marvel’s Guardians of the Galaxy Season 4 Release Date: When will it premiere?

‘Guardians of the Galaxy’ season 3 premiered on March 18, 2018. Since then, Disney has not made any renewal announcements about the show since then. We don’t know what fate has befallen the show, but in January 2018, it had been reported that Marvel was contemplating pulling the plug on all its Disney XD shows. At the same time, Marvel is now a Disney property, so don’t be surprised if the show is greenlit for another season. Our best guess is that if the show does get renewed, ‘Guardians of the Galaxy’ season 4 can release sometime in 2020 on Disney Plus streamaing service.  We will update this section as soon as we hear more.

Marvel’s Guardians of the Galaxy Trailer:

While we wait for news on the future of ‘Marvel’s Guardians of the Galaxy’, here’s the trailer for Season 3 to give you a glimpse into the action-packed animated show.