When Will Gumball Season 7 Premiere on Cartoon Network? 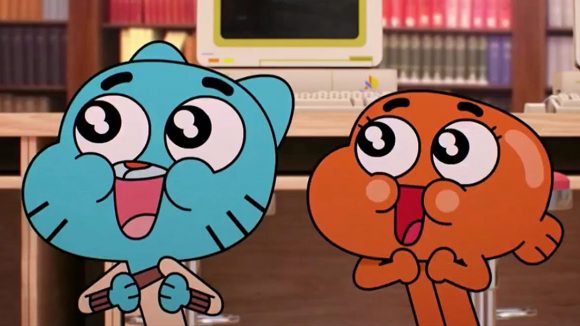 ‘Gumball’ or ‘The Amazing World of Gumball’, created by Ben Bocquelet, is a surreal animated comedy that airs on Cartoon Network, where it originally premiered in 2011. The story follows the multiple activities of the eponymous character, who is a 12-year-old, anthropomorphic blue cat. The series also throws the limelight on his adopted brother and best friend, the 10-year-old goldfish named Darwin. The duo goes to school in Elmore and everyday, they embark on multiple adventures, which end with them interacting with their friends and other family members — younger sis Anais, mom Nicole and dad Richard.

The show has had six successful seasons so far. Now the question is, will there be a ‘Gumball’ season 7? We will delve into that question, but first let’s quickly look into the details of the series.

Gumball Cast: Who’s in it?

‘Gumball’ stars Nicolas Cantu as the voiceover artist for the titular character, Gumball Watterson, an antic-prone cat who studies in Elmore Junior High in the seventh standard with his adopted sibling Darwin. Gumball lives in the fictional town of Elmore in California. Joining the lead cast is Christain J. Simon as Darwin, Kyla Rae Kowalewsk as Anais, Teresa Gallagher as Nicole, and Dan Russell as Richard.

Gumball Plot: What’s it about?

Developed as a mix of a family series and a school show, ‘Gumball’ is based on the characters created by Ben Bocquelet, which were previously rejected by other production houses. Once he presented his pitch before Turner Broadcasting’ Daniel Lennard, the idea was immediately given a series order. Produced by Cartoon Network Studios Europe, Studio SOI, and Great Marlborough Productions Limited, ‘Gumball’ comprises a set of oddball characters that do not resemble each other in appearance (at all). Each creation has its own distinct design and animation style. And this is the aspect that makes it so unique when compared to other titles from the genre.

Developed as a dark comedy and satirical animated series, ‘Gumball’ follows the various antics of its central character with the same name. 12-year-old Gumball is a blue cat who is prone to mischief and resides with his family in the fictional city of Elmore in California. He goes to Elmore Junior High along with his 10-year-old adoptive brother Darwin (a goldfish) and studies in the seventh grade.

The pair regularly crosses paths with trouble. In the beginning, Gumball is depicted as a character with good intentions, whose actions often go wrong, although he always means well. However, as the seasons progress, we see him growing into a serious, thoughtful and yet, sarcastic cat. In one of the episodes, he comes to know that his actual name is Zach, after which he develops split personality –which is eventually apparently cured.

Gumball also has a crush on his classmate Penny Fitzgerald and these feelings are mutual. Although, at the start, Gumball has difficulties expressing his feelings, later he overcomes his inhibitions and approaches her — after which the two start dating. In season 3, we also learn that Gumball and Darwin do not age. Overall, the central character is good, in spite of his flaws, which include a huge ego and a critical nature.

Other characters who accompany Gumball and Darwin in their multiple shenanigans across the city include his talented sister Anais (a rabbit), stay-at-home dad Richard (a rabbit), and a workaholic mother Nicole (a cat). Again, in several episodes, we also meet Gumball’s main nemesis, Rob, a character who is trapped in The Void after he becomes “irrelevant”. The Void is a certain dimension within Elmore that serves as a center for all the universe’s mistakes.

Gumball Season 7 Release Date: When will it premiere?

‘Gumball’ season 6 premiered on January 5, 2018 on Cartoon Network. After airing for 44 episodes, it wrapped up on June 24, 2019. Season 6 is the longest installment from the series and has the show’s 200th episode, ‘The Vegging’.

Now, as far as ‘Gumball’ season 7 release date goes, here’s what we know. Ben Bocquelet announced on September 6, 2016 that he would be leaving the production team after season 6 but the show would continue without him. However, on October 7, 2018, he again posted on Twitter that the sixth part would be the final season. And yet again, there was a follow-up clarification saying that there might be further seasons. A 6-episode mini-series, ‘Darwin’s Yearbook’, was confirmed in November 2019 as well.

So, yes, there’s hope for the show to make a comeback. When? We don’t have an update on it yet. According to our best guess, ‘Gumball’ season 7 should premiere sometime in July 2020.

While we wait for an update on ‘Gumball’ season 7, you can watch the official trailer for the show below: