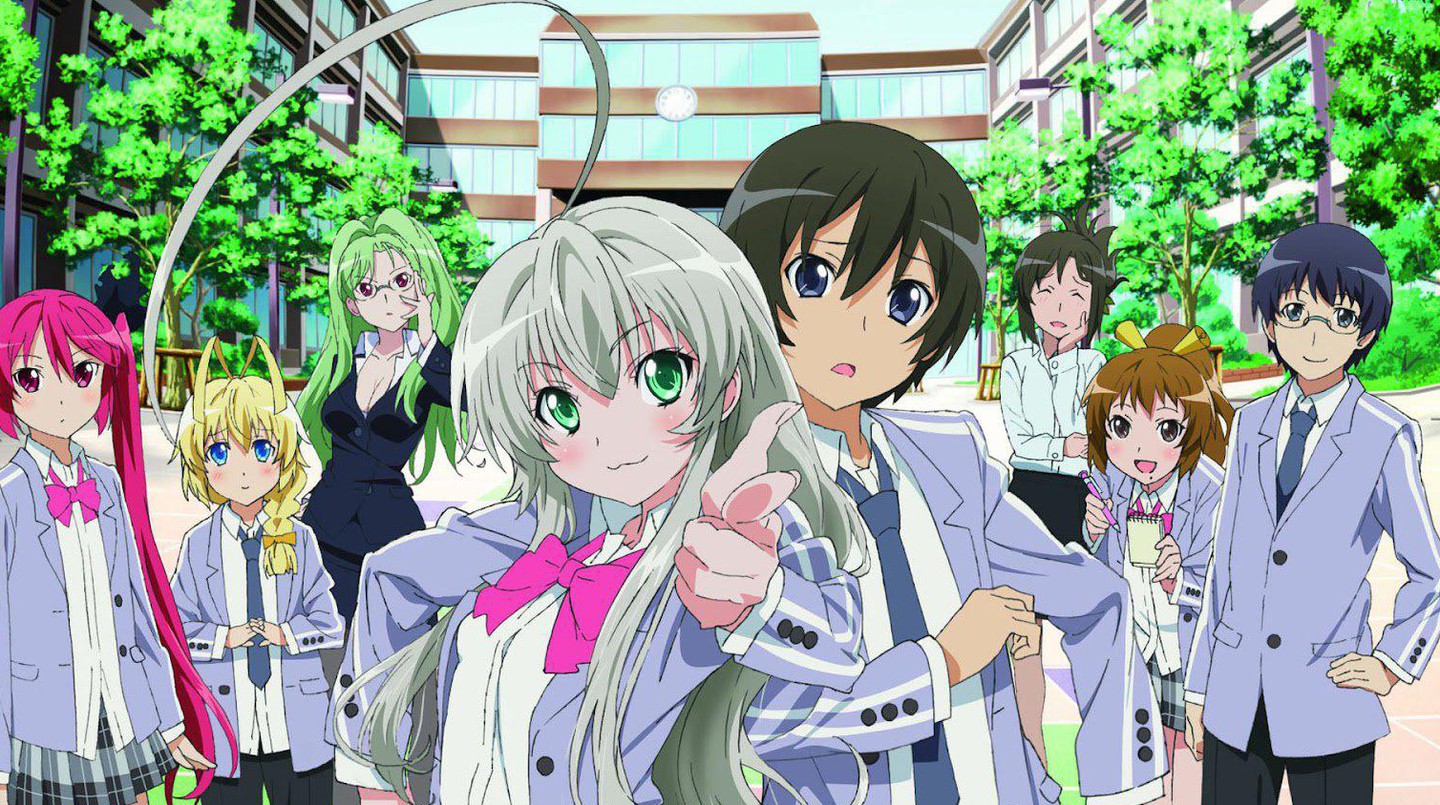 ‘Haiyore Nyaruko-San’ also known as ‘Nyaruko: Crawling With Love’ is the kind of anime that you’ve probably seen more than once before. There’s nothing new about it. Its storyline is just a bunch of events thrown together to make ridiculous gags. Even the gags are not exceptionally funny and just like the characters, these have been recycled from your typical anime archetypes. If you’re looking for a comedy with a proper well-structured story, then this anime is not for you.  But what’s enjoyable about this show, is its eccentric and diverse characters, all of whom, add some personality to the overall plot.

Since the show is more character-driven, the designs and art style of these I just amazing and is one of those few things that’ll make you stay with it till the end. There are some annoying fan service moments as well, but you can’t help but appreciate the quality of animation in these. Even the opening and closing themes are quite catchy and the background scores fit right in with the scenes they are played with.

Even with all of these positive elements, ‘Haiyore Nyaruko-San’ does not even try to be unique and honestly, it doesn’t have to. It is certainly not the kind of show that will appeal to everyone and is no way groundbreaking. But every once in a while, you feel like watching something that’s light-hearted and does not involve too much thinking. That’s where ‘Haiyore Nyaruko-San’ is your perfect choice. If you really want to enjoy watching this show then just try not to take too seriously. If you’re able to do just that, you’ll find yourself giggling at the weirdness of the characters and laughing out loud at the best gags.

Haiyore Nyaruko-San Season 3 Release Date: When will it premiere?

‘Haiyore Nyaruko-San’ season 1 premiered on April 10, 2012 and came to an end on June 26. During this span, it aired a total of 12 episodes with each one of them being 24 minutes long. This was followed by a season 2 that released on April 8, 2013 and went on till July 1, 2013. After this, a one-episode OVA was aired on June 19, 2015. Over the years, ‘Haiyore Nyaruko-San’ has gained a lot of popularity and if we look at the ratings of the show on some well-known platforms, it has been constantly improving with each season. Considering this, I don’t see a reason why the creators won’t be willing to continue to the show.

But despite its initial popularity and improvements with new seasons and OVAs, the hype around the anime has not materialized into something concrete. It has been close to 4 years since its final OVA came out but we haven’t heard from the makers yet on a new season. Our best guess is if at all the anime gets renewed, ‘Haiyore Nyaruko-San’ season 3 can only come out in 2021. Though, the more logical scenario would be that creators might just think of coming out with more OVAs or even side stories of the series. As of this publication, there are no official confirmations regarding the future of the show but if we get any news about it, we’ll surely update it here in this section.

The English Dub of ‘Haiyore Nyaruko-San’ is yet to be released but you can still find an English Subbed version of it on Crunchyroll.

Mahiro Yasaka is a high-school teen who has always lived an ordinary life. He loves peace and avoids getting into any sort of trouble until one day trouble comes looking for him. He is suddenly attacked by a deadly monster who almost ends up killing him. Somehow, he manages to survive this attack after a girl named Nyaruko saves him and claims to be a shape-shifting creature known as the Nyarlathotep. She tells him that she came into existence from horror writer H.P Lovecraft’s Cthulhu Mythos and has been sent from space to protect the people of Earth. Then she explains it to Mahiro that the creature who was trying to attack him was actually an alien called Nightgaunt who wanted to abduct him and then later sell him as a slave.

Soon after saving Mahiro from the monster, Nyaruko falls in love with him and forces her way into Mahiro’s personal life. She even moves to his home and though this really annoys him, he is able to do nothing as she is extremely strong and also because he owes her one for saving his life. As time goes by, things get worse for Mahiro as they are joined by another girl named Cthuko who is all obsessed with Nyaruko and also a boy named Hasuta who can easily be mistaken as a female. The three of them keep Mahiro out of harm’s way as they protect him from all the extraterrestrial threats around him but at the same time, they make his entire life a living hell.

Cthuko, also known as Kuuko, is one of the main characters of the series who is an ancient alien. She initially shows a lot of obsession towards Nyaruko and later does the same with Mahiro. In the beginning, she seems to have a problem with Nyaruko and Mahiro’s relationship and even asks Mahiro to stay away from her friend. But as she spends more time with him, she starts to enjoy his company. She later joins Mahiro’s school and becomes a hardcore Otaku fan. Her human form takes the appearance of a teenage girl with two long waist-length ponytails and red eyes. Despite being an alien, she just loves playing video games. She usually comes off as a very kind person but when things go a little out of hand, her acts of perversion have no bounds.

Hasuta is another alien who was once the Space Elementary School classmate of Nyaruko and Cthuko. He possesses the power of air and fights his opponents by creating vacuums of wind. Despite being really tiny, he is actually stronger than both Nyaruko and Cthuko. His normal human form appears to very shy and takes the appearance of a young girl. But when he reaches his true power form, he appears to be more mature and wise. His power form is like alter-ego that contrasts his other feminine side.

Nyariathotep, nicknamed Nyaruko, is the main titular protagonist of the show who is an indescribable alien god and has the ability to take the form of anything that she desires. She has been sent to Earth to protect Mahiro from other alien forces that want to harm him. She even joins his school to keep an eye on him and later starts to fall in love with him. Like Kuuko, she loves playing video games and even claims that human entertainment sources are famous amongst other gods as well. Her real age is a mystery as Kuuko always tends to stop Mahiro every time he tries to question her age. She also gets really obsessed with the Otaku culture and even spends a lot of her money on Otaku products. When it comes to her friends, especially Mahiro, she is extremely kind and caring. But when hostile aliens try to attack Mahiro, she becomes very abusive and violent.

Mahiro is the main protagonist of the anime who is a human boy and to his dismay, he finds himself under the protection of an alien god named Nyaruko. Despite being a human with no supernatural powers, he attacks aliens by throwing knives and forks at them. He’s so fast and accurate at throwing these objects at aliens that no alien has ever been able to dodge his attacks. Even when it comes to the aliens who are protecting him, he gets really irritated by their presence and just wants to throw them out of his house. But later, he starts liking their presence and accepts them for how they are. He even starts falling for Nyaruko but her aggressive advances towards him are a huge turn-off. He appears to be quite tall and is known for good looks amongst all women. His personality does not change much throughout the series and he remains to be the kind peace-loving person that he always was. He is also very smart and mentally mature for his age. The fact that he allows the aliens to stay with him at his place shows that he is also extremely patient and does not lose his temper too easily.