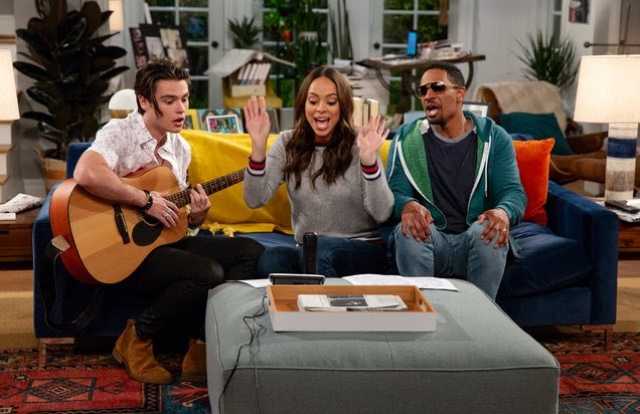 ‘Happy Together’ is an American comedy sitcom that airs on the CBS. It first premiered on October 1, 2018. Created by Tim McAuliffe and Austen Earl, the series tells the story of a couple in their 30s, Jake and Claire, trying to upgrade their life after they get tired of their boring lives. They are reminded of their younger selves when an upcoming pop star who feels a connection with their suburban life, decides to move in with them.

Harry Styles, who made his acting debut, in Christopher Nolan’s ‘Dunkirk‘ is on board as a co-executive producer of the show. He also used to be a member of the famous pop band ‘One Direction’. He appears to be the biggest crowd puller for ‘Happy Together’ and the plot of the series is also loosely based on his experience.

While fans took to the series more for Styles than the show itself, critics were none too impressed with the content. They conceded that the show might get a few laughs due to the stunning performance by the trio in the center of the plot, but as far as originality is concerned, the show lacks quite a bit in that department.

Happy Together Cast: Who is in it?

The main cast of ‘Happy Together’ includes Damon Wayans Jr. of ‘New Girl‘ fame who appears in the role of Jake Davis, an accountant in the entertainment industry. One of his clients is Cooper James, played by Felix Mallard. The role of Cooper is that of an up and coming pop star, and he is one of the central characters of the show.

The other central character is Amber Stevens West of ‘22 Jump Street‘, who plays the role of Claire Davis, a person who designs bars and restaurants and happens to be Jake’s wife. Other characters include Bonnie and Gerald, both retired doctors and Jake’s parents. They are played by Stephnie Weir and Victor Williams. Chris Parnell, known for having worked on shows like ‘Saturday Night Live’, and ‘Archer‘, appears in the role of Wayne, Jake’s colleague, who is a talent manager and happens to be employed by Cooper. There are several guest characters who enrich the experience of the show, and they include the likes of James Corden, among others.

Happy Together Plot: What is it about?

The main plot of ‘Happy Together’ is about Damon Wayans Jr and Amber Stevens West, who play a couple settled in the suburban area. They are awestruck when a young pop star, played by Australian Felix Mallard, decides to move in with them. Their life till now had been mundane, and being on the other side of the 30s, this was one more opportunity to live their younger years once again.

At 24, Styles was starting his career. In those days, he lived with his friend Ben Winston and wife, who was in the suburbs of London. Styles was planning to stay there for two weeks but ended up living in their attic for 20 months. Winston who currently works as an executive producer on ‘The Late Late Show With James Corden’ had a cameo in ‘Happy Together’ playing himself.

“I had a meeting with Ben Winston and a couple of other writer-producers and read the script, and I thought, ‘It’s a really funny script, but I’m not too invested in it.’ Then when I met Ben and heard it was based on [his] actual life? I was like, ‘Oh, I know there have got to be so many story ideas.’ He was telling me how Harry Styles used to live in his attic for, like, years. At the height of his career. He would go and sell out Wimbledon and fly back to his little attic and sleep there. And Ben would have Taylor Swift at his house in the kitchen in the morning and was just like, ‘Whoa…wait. What’s going on? This is crazy!’ So, I fell in love with it once I realized it was real. I knew I got to do it,” said the star of the show, Wayans Jr.

While the stars struggle to keep the show from spiraling into mania, the series itself does not do any favors, by being no different from the generic sitcoms that we have seen, with jokes from a bygone era. As in the case of most sitcoms, there is no overarching plot, but instead a day to day portrayal of the suburban couple, and their pop star guest. Although the couple is semi-happy with their routine when the pop star arrives, there is a quid pro quo at stake in letting him stay with them. He gains stability, while the couple gains spontaneity. Unfortunately for the series, its narrative goes against its very conceit. While the pop star is supposed to be more charming, here the couple seems more interesting, and they have to be so since we spend most of the time with them, and the show makers have to hold on to our interests, which is not possible with bland characters.

Understandably, the show has its heart in the right place, but it has gotten off to a rocky start. If it does continue, hopefully, it changes some things so it is a better experience than it currently is.

‘Happy Together’ Season 1 premiered on October 1, 2018, on CBS. Unfortunately for the fans, on May 11, 2019, CBS cancelled the show. The decision to not renew the show is understandable considering it was plagued with low viewership ratings. Moreover, the cancelation was coming for a long time, when the network did not order additional episodes beyond the initial 13 episode run.  Though, fans should not lose all their hopes. There’s still a possibility that some other network picks up the show. If that happens, we will update you about ‘Happy Together’ Season 2.

While we wait for an update on season 2, check out the season 1 trailer to refresh your memories. If you haven’t seen the show yet head over to CBS to catch all the episodes of the first season.