When Will Harrow Season 3 Premiere on Hulu? 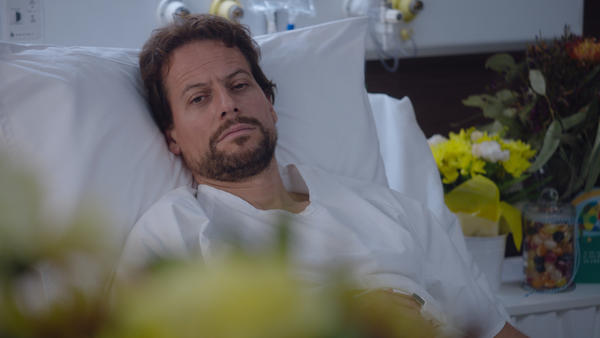 Harrow is an Australian television series, which airs on ABC in Australia and on Hulu in the US. Written by Stephen M. Irwin and created and produced by Leigh McGrath, it follows the various adventures of its titular protagonist, Dr. Daniel Harrow, a forensic pathologist. Although Daniel holds an absolute disregard for authority, his maverick ways make him a winner in solving criminal cases.

Harrow has remarkable gifts and is an absolute genius when it comes to solving even the most bizarre cases. Filmed in Brisbane, Australia, most of the offices and laboratories showcased across the scenes are from the former Brisbane Dental Hospital and College, which is listed under heritage properties. Hulu enjoys exclusive rights to stream the show, both current and future seasons, in the US.

‘Harrow’, since its launch, has spanned two successful seasons. Now the question is, will there be a ‘Harrow’ season 3? Let’s find out.

Harrow Cast: Who’s in it?

The cast of ‘Harrow’ is led by Ioan Gruffudd as Dr. Daniel Harrow, senior medical examiner at the Queensland Institute of Forensic Medicine (QIFM). Daniel is a smart and maverick scientist who always wants to do justice to the dead but hides a dark secret in his personal life. When Ioan was asked about his role as Dr. Harrow, he explained, “I’ve been wanting to play a character like this for a long time, but haven’t been old enough, or old-looking enough. But now I’m in my 40s, and I’m meeting the characters I’ve always had a desire to play.”

Anna Lise Phillips stars as Stephanie Tolson, Harrow’s ex-wife, also Fern’s mother and a primary school teacher. Darren Gilshenan portrays Lyle Fairley, a pathologist at Queensland Institute of Forensic Medicine, who is a firm believer in abiding by the rules contradicting Harrow’s ways but always finds himself in Harrow’s shadow professionally in spite of being a stickler for rules.

Damien Garvey stars as Bryan Nichols, Detective Senior Sergeant at Queensland Police’s Criminal Investigation Branch. Ella Newton plays Fern Harrow, Harrow and Stephanie’s daughter who has been living for two years on her own on the streets and is deeply involved in Harrow’s dark secret.

Jolene Anderson joined the cast of Harrow in its second season. She stars as Grace, a fellow pathologist at Queensland Institute of Forensic Medicine. The All Saints star was very excited to be a part of the crew in season 2 and expressed her enthusiasm, saying, “You kind of know the procedural stuff and also the writing is quite quirky, so it’s equal parts serious with the business in forensics, and quirkiness with the relationships. I think the writers have nailed it.”

All of the lead cast, including Ioan Gruffudd, Jolene Anderson, Damien Garvey, Darren Gilshenan, Ella Newton, Hunter Page-Lochard and Faustina Agolley will be returning for the third season.

Harrow Plot: What is it about?

‘Harrow’ is the story of forensic pathologist Dr. Daniel Harrow, played by Gruffudd. Harrow’s absolute disregard for authority and his unfailing empathy for the dead help him solve even the most bizarre cases that no one else can. He is driven to give victims a voice and justice and will bend every rule on his way to get to the truth of what happened to them.

But when a terrible secret from his own past threatens his family, career and himself, Harrow needs all his patience, wit, and forensic genius not to solve a crime, but to keep it buried to protect himself and his daughter. Season one finale reveals Harrow’s dark secret – a murder which Harrow confesses to having committed in a bid to protect his daughter.

Season 2 begins by revealing that after Harrow was shot in the season 1 finale, he is rescued and he survives, with the bullet only piercing through his gall bladder. After being announced that he is healthy, he returns to stay back in his boat, Bettie. However, Nichols suggests that he stay in a hotel until they track the attacker.

Harrow then visits a bar and ends up spending the night with a woman, who is later revealed to be Grace Molyneux, the new doctor at QIFM and Fairley’s niece. She is trying to solve the murder of a woman. Meanwhile, Nichols tracks down Brendan Skene, who confesses to having shot Harrow and on the other hand, Harrow receives an anonymous call that threatens to ruin his life. Meanwhile, the cops apprehend Fern with a bag of fentanyl citrate.

Season 2, after a lot of twists and turns, ends on a major cliffhanger when Harrow is informed by Bryan that a young boy’s passport shows him as Daniel’s next of kin. He might be Daniel’s son — another storyline that’s planned for season 3. The synopsis for the third reason reads something like this: “In the third season, a young man who claims to be Harrow’s son turns up dead and everyone including Harrow is stunned – but is the dead young man really Harrow’s boy? While tirelessly pursuing the truth in a host of compelling episodic cases, Harrow is also driven to unravel the mystery of his supposedly dead son and finds himself entangled in a dangerous criminal underworld. But when those closest to Harrow are threatened, he will face an impossible choice. How far will Harrow go to save the people he loves?”

Harrow Season 3 Release Date: When will it Premiere?

After receiving immense positive response from fans, the series was renewed by ABC for another season with star Ioan Gruffudd even directing one of the episodes. We don’t have an official release schedule yet but if everything goes according to plan, ‘Harrow’ season 3 will most likely release in May 2020.