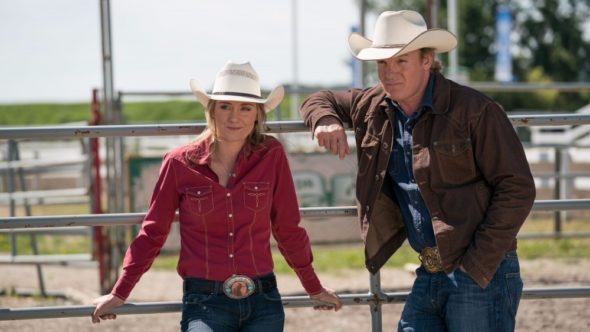 ‘Heartland’ is the tv adaptation of the eponymous book series by Lauren Brooke. Starring Amber Marshall as Amy Fleming, it starts by introducing us to a 15-year-old Amy who gets involved in a car accident, which ends up killing her mom Marion. The incident happens when the duo tries to save an abused horse. Amy is injured, but she recovers and eventually returns to her mother’s ancestral ranch. Here, she decides to carry on with Marion’s work of healing damaged horses. Using her innate capability to connect with horses, Amy navigates the ups and downs of her personal life as she tends to her farm.

One of the longest-running scripted dramas in Canadian television history, ‘Heartland’ has drawn praise for its heartwarming storylines and sprawling vistas, set against the backdrop of the Rocky Mountains. After spanning 13 seasons, it returned with its 14th edition in January 2021. For viewers in the US, let us check out when the latest iteration will grace tv screens. We will also take you through the details of how and where you can catch the show online.

‘Heartland’ season 14 premiered on January 10, 2021, on CBC and CBC Gem in Canada, at 7 p.m. local time (7:30 NT). In the US, the show airs on UP TV. Usually, new seasons are released in America, a few weeks after their national debut. Now, season 14 consists of 10 episodes, and it should wrap up sometime in March 2021 in Canada. Therefore, we expect ‘Heartland’ season 14 to premiere not earlier than April 2021 in the US.

Audiences in Canada can watch ‘Heartland’ with the help of a cable subscription to CBC. Otherwise, the episodes can be streamed on the CBC official website. You might choose to check out the show on CBC Gem as well. In the US, you can watch the new season as and when it is released on UP TV. You can additionally catch up on ‘Heartland’ on UP Faith & Family. Previous seasons of the series are also available on Netflix.

Another option for fans is to buy or rent the episodes on Amazon Prime Video. Live-streaming, cable-free services include Directv, Fubo TV, Sling TV, YouTube TV, and Philo TV. Finally, a couple of platforms offer you the alternative to buy or purchase the series. They are iTunes, Google Play, and Microsoft Store.

Season 14 follows the same premise as the previous editions. It focuses on Amy, with her uncanny ability to understand horses, as she is guided by her close ones, in carrying forward this noble mission for several years to come. The first episode from the 14th installment is called ‘Keep Me in Your Heart,’ and here is its official synopsis as outlined by CBC: “The past year has brought unexpected change to the Heartland family; Amy deals with a major upheaval in her life; Lou copes with the reality of being the mayor of Hudson; Georgie revisits her dream of the Olympics.” For some more insights, you can also watch the official trailer for season 14 below: