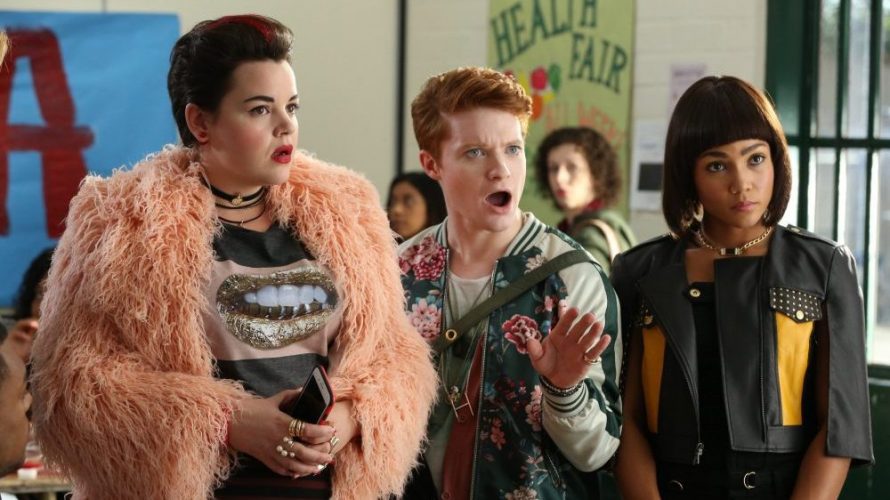 This series is the revival of the 1988 film with the same name written by Daniel Water. It revolves around a high school student named Veronica Sawyer who is dealing with various personal problems and school issues. She is part of a popular clique named The Heathers that comprises of three students who share the same name. Each episode of the show has a runtime of 32 to 42 minutes.

Heathers Cast: Who is in it?

Veronica Sawyer is one of the most popular girls at Westerburg High School in Sherwood, Ohio, and a member of a clique of three wealthy and beautiful girls with the same first name: Heather Chandler, Heather Duke, and Heather McNamara. Veronica Sawyer is played by Grace Victoria Cox.

Heather Chandler is the leader of the famous clique in her high school named The Heathers.  Chanler is played by Melanie Field. The character of young Heather is played by Emma Shannon.

Jason “JD” Dean is Veronica Sawyer’s boyfriend. He is always seen talking in a verbose manner about the ranking of her new school named Westerburg High. Dean is played by James Scully. The younger version of the character is played by Maverick Thompson which is a pivotal role.

Heather “Heath” Duke is one of the members of The Heathers. He is extremely jealous of Heather Chandler because she is powerful and has many friends. Duke is played by Brendan Scannell. The young version of him is portrayed by Jack R. Lewis.

Heather McNamara is faking to be gay and is in a secret relationship with an adult faculty member. She is said to be the most reserved as well as an innocent member of The Heathers. She is played by Jasmine Mathews.

Dylen Lutz is one of the most harassed students in the school. He is played by Jeremy Culhane.

Heathers Plot: What is it about?

Veronica Sawyer is dealing with her life problems. When she coincidentally meets JD, she decides to befriend him. At the same time, she is caught up between her private life and the group named The Heathers. The group plans to murder Heather C and make it look like an accident in order to bring her down as the leader of the clique. But killing her is not simple. However, they succeed. As they put their plan to action, it is up to Veronica and JD to not attract much attention from the other students.

Betty Finn who is the nerdy best friend of Veronica tries to take away the crown from Heather C during the school’s memorial so she can be the leader of the clique. Heather McNamara and Heather Duke struggle to live under the leadership of Betty Finn.

Students mourn for Heather C’s death but after a few days, Heather comes back from the dead and makes a grand entry. Heather C decides to launch a campaign related to suicide awareness. She also forces her friends to tag along. Veronica gets fed up of careless behaviour and goes on a double date with two football players. Heather C forces Heather Duke to take part in a school play. JD decides to get her girl back when he realizes that Veronica is going on a second date with Ram. Heather C’s brand gets defamed while she was trying very hard to make her suicide campaign successful in her school. In the next episode, police interrogate JD and Betty. JD is tormented by a text message from an anonymous person who knows all of his crimes. We don’t want to spoil the show anymore. Catch it on Paramount Network to know more.

Heathers Season 2 Release Date: When will it premiere?

Heathers season 1 premiered  on October 25, 2018. As far as the next season is concerned, we haven’t received any update from Paramount. The series has split audiences in the middle. While some love it, there are others who hate it because of the controversial climax. Considering the fact that the show did manage to create a lot of buzz, the makers might want to cash on it. So, it is very likely that the show will return for another season. If that happens, you can expect Heathers Season 2 to have a release date sometime in 2020.