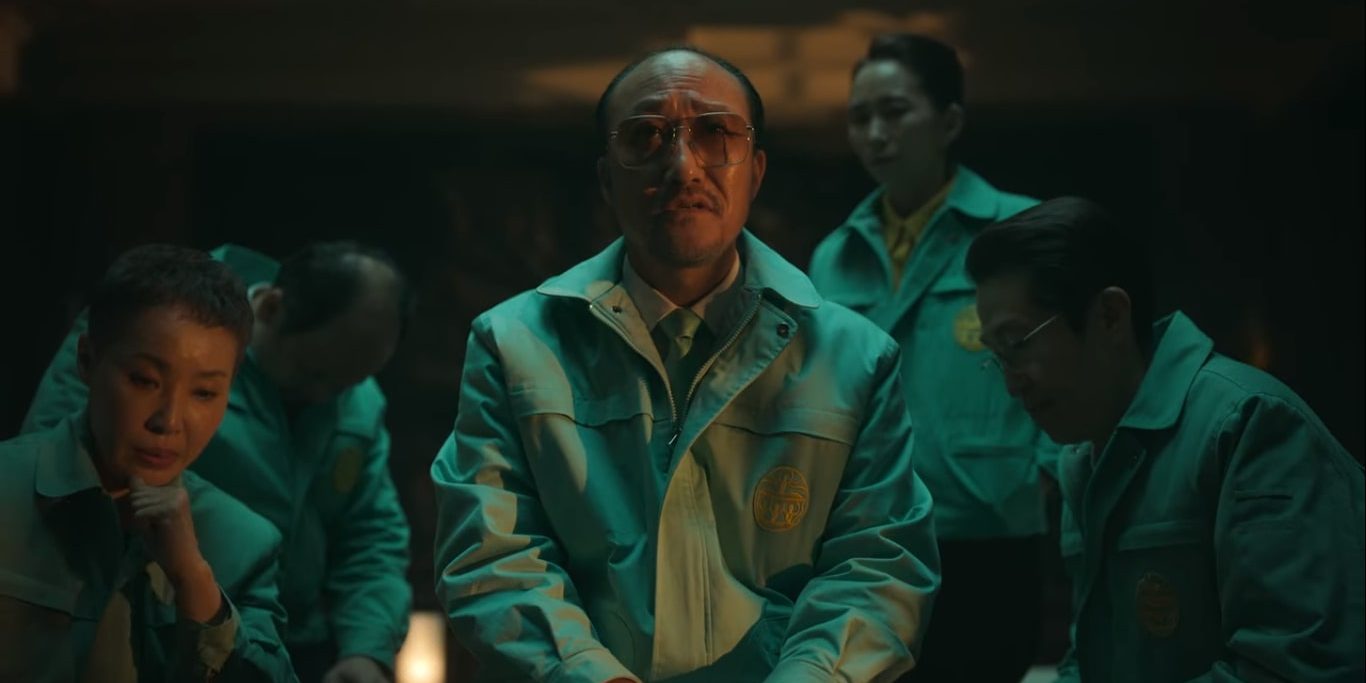 Netflix has not stopped at the brilliance of ‘Squid Game,’ as excellent Korean shows flood the streaming platform at regular intervals. Yeon Sang-ho, who previously terrified the world with films like ‘Psychokinesis’ and ‘Train to Busan,’ teamed up with Choi Kyu-Seok to create the supernatural series ‘Hellbound’ (originally titled: ‘Jiok’) for Netflix. It is a morally damning dystopian horror show where you cannot escape your sins, how insignificant they may be.

The story is based on the director’s webtoon series of the same name. At the beginning of all beginnings, we see three nefarious and otherworldly beings burning a human alive on the streets before disappearing in thin air. When selected sinners are bestowed with the knowledge of their impending deaths, civilization reaches the brink of a collapse. On the other hand, a fanatic cult slowly reveals its proper form under the leadership of a charismatic leader.

Critics and audiences highly lauded the first season of the twisted morality tale due to the cerebral pace, epic story, philosophical tone, brilliant cast, menacing visuals, atmospheric tension, and guiding direction. However, following the self-violating cliffhanger of the finale, you must be wondering about the prospects of its return. If so, let us reveal everything we know about ‘Hellbound’ season 2!

‘Hellbound’ season 1 premiered in its entirety on Netflix on November 19, 2021. Ahead of its release on the streaming platform, the show premiered on September 9, 2021, in the 2021 Toronto International Film Festival, becoming the first K-drama to appear at the festival. The first installment packs six episodes, with runtimes ranging between 42 and 60 minutes.

Let us now get into the prospects of the second season! Yeon Sang-ho seems to be in his creative prime, and there are still too many “sinners” out there. The director reportedly wanted to tap into the horrors of uncertainty, and he does not seek to stop anytime soon. As per Yeon’s testimonial, ‘Hellbound’ is developed from the first-ever scenario that he wrote. Thus, it presumably holds a special place in the director’s heart, and he would want to expand the universe. The cliffhanger in the end pretty much keeps the audience hooked for the sophomore season.

Moreover, we have come to know that the second volume of the Korean manhwa is waiting for release. Due to the epic nature of the show, it relies on a rotating cast. Therefore, the second season seems quite sure. While Netflix is yet to announce the second season officially, if it causes the anticipated uproar, the streamer will make haste to greenlight it. If it is renewed by the end of 2021, we can expect ‘Hellbound’ season 2 to premiere sometime in late 2022 or early 2023.

Hellbound Season 2 Cast: Who can be in it?

The cast members whose characters are saved from the wrath of a merciless God will hopefully reprise their roles in the second season because the show’s effect is created from the dynamic of the star-studded cast ensemble. We may expect Kim Hyun-Joo to reprise her role as Min Hyejin.

Also possibly returning are Ik-Joon Yang in the part of Jin Kyunghun, following the character’s mysterious disappearance in the middle of the first season. Re Lee (Jin Heejung, Kyunghun’s daughter) and Shin-rok Kim (Park Jeongja) will possibly reprise their roles if the show is renewed for a second round.

Hellbound Season 2 Plot: What can it be About?

In the finale of the cathartic first season, humanity is yet to explain the strange phenomenon of “angels of death.” However, lawyer Min Hyejin, now leader of the resistance group Soto, rescues the miracle child from the Arrowhead broadcaster. The last scene catches her getting away in a cab. In the mind-bending epilogue, the burnt body of Park Jungja, the victim of the first widely broadcasted demonstration, gets reassembled from the dust.

With the cliffhanger, the second season can veer off to further uncanny and macabre lanes. What lies further for the post-apocalyptic world? The season will possibly put rest on the glaring question of the audiences about the rebirth of Park Jungja. The human mind looks for comfort in structures, but there remains no structure in the randomized wrath of God. Civilization may get back into order following the first season’s finale, as it will be a time for atonement for the New Truth Society.