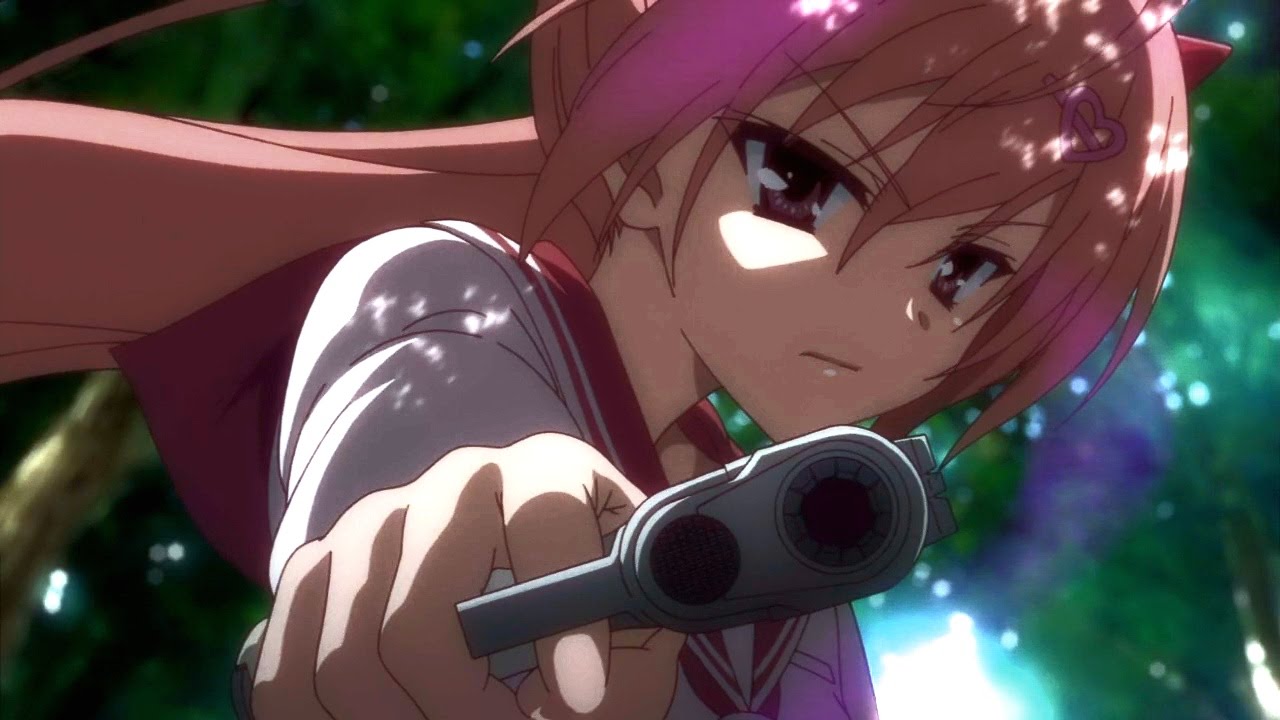 ‘Hidan no Aria’ is more or less of a crime anime with a very interesting premise that revolves around a high school where young men and women are trained to become future crime solvers. The entire series has a combination of some light comedy, a little bit of high-school drama and also some quality action. The overall story is not all that great and has no fancy twists and turns; but it still isn’t boring at all and actually gets interesting in the second half of the season.

What starts off as your cliched high school setup slowly turns into something more entertaining and intriguing. Coming from J.C Staff studio that is known for some highly popular shows like ‘Toradora‘ and ‘Zero no Tsukaima‘, the animation was expected to be really good and yet again, the Studio does not disappoint at all. Overall, ‘Hidan no Aria’ is a simple show that downplays its theme a little but is still fun to watch; and I would recommend it to anyone who wants to watch a typical high school drama with a little bit of crime-centric action.

Hidan no Aria Season 2 Release Date: When will it premiere?

‘Hidan no Aria’ Season 1 aired from April 15, 2011 to July 1, 2011, consisting a total of 12 episodes. This was followed by a special episode that was released on December 21, 2011. Just when everyone was starting to believe that we will not see more of it, a side-story anime titled ‘Hidan no Aria AA’ was aired from October 6, 2015 to December 22, 2015. Unlike season 1, the side-story adaptation was not accepted too well by the fans and failed to even get an average rating on most renowned platforms; this itself could be a big indicator of the anime’s end.

Also, considering the fact that the first original version of the anime was created by J.C Staff Studio and the other one by Doga Kobo, it seems very likely that J.C Staff won’t be interested in going for its renewal. So as of now, most factors are not in favor of another season but even then, if we get any updates regarding its renewal or about Hidan no Aria Season 2 release date we will surely update it here in this section.

The English Dub of ‘Hidan no Aria’ is now available on Funimation.

The crime rates in Japan are constantly on the rise and the government realizes that something needs to be done about this situation before things go way out of hand. This is when they create Japan’s Elite Tokyo Butei High which is an academy for the best “Butei” or armed detectives who get to hone their skills in the hope that eventually they will be able to bring the whole crime situation under control. All of these “Butei” work together to polish their crime-solving skills and later use these out in the real world to bring justice.

One of these Butei is Kinji Tooyama, who is an anti-social sophomore drop-out who was once all set to pursue a career in the combat-centric Assault Division. Kinji now spends almost all of his time studying logistics in order to hide his extremely powerful yet embarrassing special ability. Everything seems to be going well for him until one day he becomes the core target of a deadly “Butei Killer” who is determined to get his hands on him. While he tries to protect himself from this killer, he runs into one of the highest ranked Butei named Aria Holmes Kanzaki. She saves Kinji’s life and in return, she asks him to join forces with her after she realizes his true potential.

Shirayuki Hotogi is a female student at the Butei Academy who is also Kinji’s childhood friend. She is also the president of the student’s council at the academy, and by using the Hotogi Arts, she can control flames and also has these natural fortune telling instincts. She has snow white skin and is referred to as “The True Japanese Beauty”. She has beautiful black flowing hair that reaches her waist and her large eyes are blue in color. Her curvy figure is always the center of attention and her bust size is often talked about by other characters.

Shirayuki was raised as a Shrine Maiden and is usually very shy and reserved. Yamato calls her the “idealized Japanese woman” because of her undying loyalty towards Kinji. But because of her loyalty, she also gets really jealous when another girl steps in the picture. She even assaults Aria when she finds out that she has been living with Kinji and calls her a “Thieving cat”.

Aria Holmes Kanzaki is an S-Rank Butei at the academy who wishes to hire Kinji as her partner because of all the feelings that she has for him. But she fails to express what she feels for him because she’s too shy when he’s around. She is a really talented Butei and is also known to be a descendant of Sherlock Holmes. She is known for her achievements, not just in Tokyo, but all over the world. Three years prior to the events of the series, she managed to survive an assassination attempt from an unknown person. Later it is revealed that the bullet contained a part of the Scarlet Goddess.

She is very bold and straightforward when it comes to expressing herself. She does not think twice before openly speaking out whatever she has on her mind. But this ego of being direct about everything gets in her way of building long-lasting relationships. She has absolutely no true allies until one day, she meets Kinji. She is also very immature and one time, she barges into Kinji’s room claiming that he is her “slave”. Later it is revealed that she is too proud to call him or anyone her “partner”.

Riko Mine is another student at the Tokyo Butei High School who is also a member of Team Baskerville. She is known to be a big idiot who does nothing but sleep through all of her lectures. Even then, she lives up to what is expected from her and is able to provide the most reliable information from the school’s underground information networks. Riko is one of the shortest characters in the series who has long blond hair and wine red eyes. She is really playful and knows how to have fun. She’s friendly with almost everyone and also gives mundane nicknames to all of her close friends. She has an obsession with gothic clothing and is also an Otaku who spends a lot of her time playing SIMS.

Kinji Tooyama is the main protagonist of the show, who was a Rank E Inquesta student at the Tokyo Butei High School prior to his retirement. After the death of his brother, he decides to leave the academy to live a normal life. But even then, he somehow manages to attract the attention of Aria and later becomes her partner. Kinji is really bitter and sarcastic and very rarely has something good to say about others around him. At the same time, he also has a very strong inferiority complex as he often feels that he is not worthy enough to work with someone like Aria. Because of the way he behaves, many believe that he is misogynistic but his hate towards women actually goes way back to a traumatic experience from middle school. Due to this, many of his peers also believe that he is homosexual.