When Will High Seas Season 3 Premiere on Netflix? 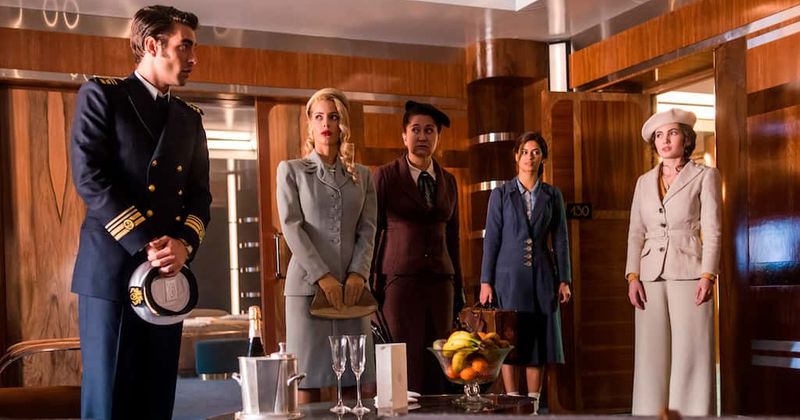 ‘High Seas’, the extravagant, engrossing, and suspense-packed period drama, is yet another title from the catalog of fan-favorite Spanish originals on Netflix. Other equally enticing names on this slate include ‘Cable Girls‘, ‘Money Heist‘, and ‘Elite’, among others.

The events of ‘High Seas’, as the name suggests, take place aboard a luxury cruise ship, journeying from Spain to Brazil during the 1940s. Two sisters are also part of this trip, but things take a sinister turn when a certain death opens up a pandora box of dangerous, dirty secrets.

This foreign-language thriller brings in a unique combo of vintage glamour and mystery elements — and hence, it did not come as a surprise when the series was renewed for a second season within a short span. Now the question is, will there be a ‘High Seas’ season 3? We will delve into that question, but first let’s quickly look into the details of the series.

High Seas Cast: Who is in it?

‘High Seas’ features an ensemble cast, showcasing some prominent names from the world of Spanish entertainment. We meet Jose Sacristan, who enacts the role of the captain of Barbara de Braganza, the vessel which is the center-stage of all the ensuing drama. Ivana Baquero stars as Eva Villanueva. You must already know the Spanish actress from her roles in ‘Pan’s Labyrinth’ and ‘The Shannara Chronicles’.

Jon Kortajarena plays Nicolas Vasquez, the chief investigating officer, who takes up the responsibility of finding the murderer on-board. The model and actor is popular for his modeling stints with elite fashion brands such as Just Cavalli, Versace, Giorgio Armani, and H&M, among others. His character in ‘High Seas’, Nicolas, is also the love interest of Eva.

High Seas Plot: What is it about?

Sisters Carolina and Eva decide to embark on a cruise across the high seas in an attempt to get out of the monotony of their high-society lives. The siblings are quite different from each other and yet, they share a close sisterly bond. Nicolás, also on-board, becomes interested in Eva while Fernando is Carolina’s fiance. However, when the sudden murder of a woman takes place, the passengers are led to believe that the murderer is among them — or in other words, one of them is the killer. Suspicions ensue and conflicts arise, creating unrest among those still journeying on the vessel.

To add to the complications, when the investigations start, Eva and Carolina unravel some dark, disturbing secrets about their family, which include complex plots, conspiracies, and even murders. In season one, the sisters go through several challenges — they end up accidentally injuring a young woman and become the key suspects when the lady is murdered. It does not take long for the siblings to get embroiled in a chain of events that threaten to tear their lives apart. In the midst of the tension, there’s also Carolina’s wedding, which is somehow linked to the murder plot.

Season 2 picks up the story from where season 1 leaves off and exposes more hidden secrets concealed in the history of the Villanueva clan. Meanwhile, Eva and Carolina attempt to protect themselves from being pulled into more complex events. Toward the end, the ship finally reaches Rio de Janeiro and Eva begins searching for her missing sister while uncovering more devastating truths about her family.

High Seas Season 3 Release Date: When will it premiere?

‘High Seas’ season 2 premiered on Netflix in all its entirety on November 22, 2019. The second season comprises eight episodes, just like its predecessor.

The series, before its original launch, had previously been planned for two seasons. And hence, it did not come as a surprise when the second installment landed within a gap of just six months. Now, as far as a third season goes, Netflix has not come up with an announcement yet. The audience reviews are more or less positive, no doubt. But a new season will depend on whether the creators wanted to make it a multi-season story in the first place. Let’s wait for the streaming giant to come up with more concrete news. As of now, if Netflix continues to follow its normal airing schedule and decides to renew the series, we can expect ‘High Seas’ season 3 to premiere sometime toward the end of 2020.

While we wait for an update on ‘High Seas’ season 3 release date, check out the season 2 trailer to refresh your memories. If you haven’t seen the show yet, head over to Netflix to catch up on all the episodes of the previous seasons: