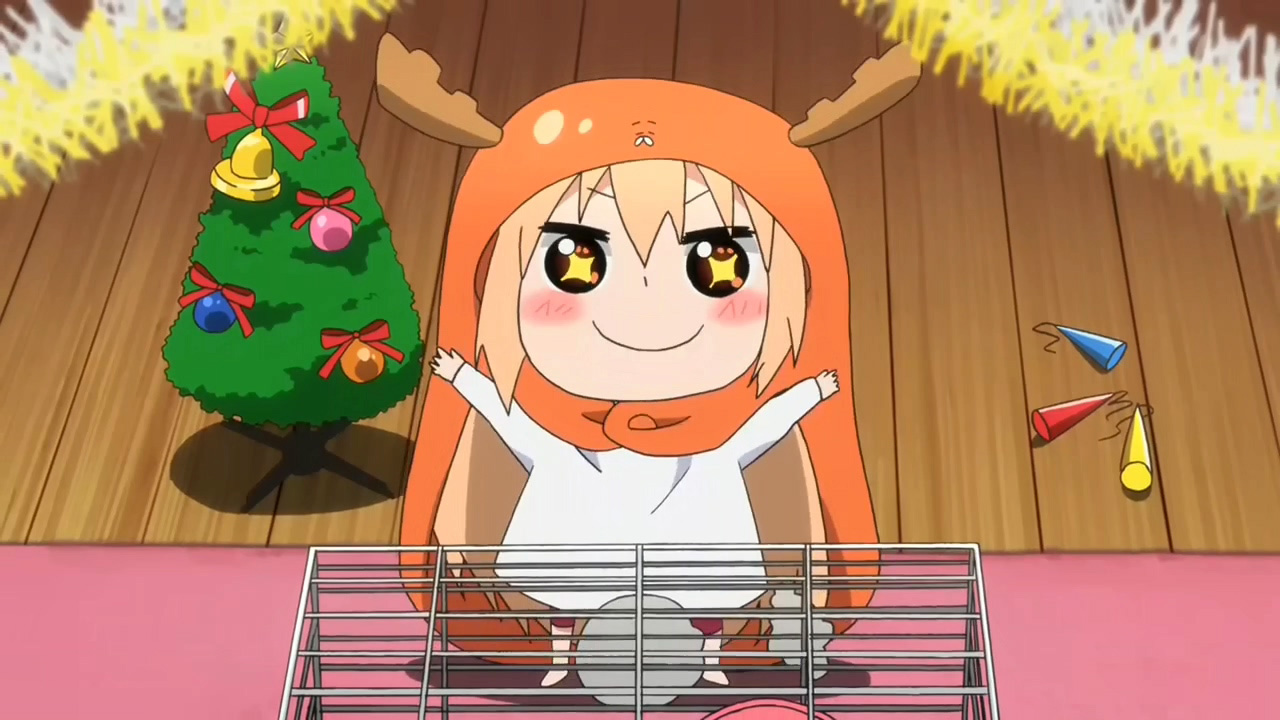 ‘Himouto! Umaru-chan’ is not the kind of anime that would usually get my attention but I was pleasantly surprised when I started watching it. Initially, I was under the impression that it wouldn’t click with me and I would surely give up on it after a few episodes. But even then, I decided to give it a go and I did not regret it. The thing with comedy is that what may be considered funny in the origin country may not really be funny everywhere else in the world, so the shows of this genre are usually the hit or miss kind. Even in the case of ‘Himouto! Umaru-chan’, it was initially hard to understand if it would work out for me or not; but once it started off, I got hooked to it. In fact, I now consider it to be one of the best anime shows I’ve seen in this genre.

This show is just perfect for someone who is looking for a slice-of-life anime that lacks too much drama. If you only enjoy feel-good anime like ‘Haganai‘ where the characters land themselves in silly situations which later leads to a lot of drama, then you might want to look elsewhere. There is no drama and no action in ‘Himouto! Umaru-chan’, but the best thing about it is that it is the show for a perfectly laid back lazy Sunday afternoon when you just want to relax. It is full of silly laughs and is very simple throughout, so don’t expect any crazy situations or complicated jokes that you won’t be able to understand. All in all, ‘Himouto! Umaru-chan’ is the perfect example of how a typical slice-of-life anime should be.

Anime shows are known for making even the most mundane things really entertaining and this one does that really well. There is absolutely no adult content in the show but it still never goes lull and is suitable for almost all ages. Even when you consider other elements of the anime like it’s animation and music, I won’t say they’re extraordinary in any way but they’re not all that bad either and they fit the whole vibe of the show. The reactive styles and expressions used for the main character are enough to represent how bratty she is. The music and the sound effects add a lot more value to the comedy scenes and make them even funnier. Similarly, even the conversations between characters can get you all curious about what might happen next in the series.

Overall, it may not seem like there is too much to enjoy about this anime but it all comes down to your personal preference. ‘Himouto! Umaru-chan’ is charming, playful and at times boisterous with all of its crazy antics that will leave you with a big smile on your face; it offers nothing more or nothing less than that.

Himouto! Umaru-chan Season 3 Release Date: When will it premiere?

The bad news is that the manga from which the anime has been adapted from is no longer being published. But the good news is that the author has decided to start off a spin-off series of the original manga, which means that there is a possibility of getting a new season. As of now, there are no confirmations from the studio’s end but considering the popularity of the show, it seems very likely that ‘Himouto! Umaru-chan’ season 3 release date to be sometime by 2021. We will update this section as soon as we learn more.

It’s nearly impossible to know the true nature of people when they are in a public space. They say there are three identities of every person where one represents how the world sees us, the second is how our loved ones see us and the third is how we see ourselves. Similar to this is Umaru Doma’s case, whose personality drastically changes as soon as she comes home from school every single day. What makes her transformation funnier is how, apart from her personality, even her physical features entirely change as soon as she steps inside her house.

At school, Umaru is one overachieving perfectionist who is admired and envied by every single person. She is just perfect in this public setup and walks around with a shiny bright aura. But as soon as she gets home and her front door closes, she suddenly transforms into this tiny little girl who dons herself in an oversized hamster hoodie. The real fun begins when suddenly, she becomes a laid back junk food hogger who does not care about her responsibilities. She spends most of her time obsessing over Otaku while her elder brother works hard to make up for her sense of irresponsibility.

When she hangs out with her friends Nana Ebina and Kirie Motoba or is competing with her rival from school, she very well knows how to transform back to her demeanor and have some fun with that personality as well. ‘Himouto! Umaru-chan’ is a cute story of Umaru’s journey in high-school with both of her personalities and how she manages to maintain a good relationship with her brother and also her friends at the same time. 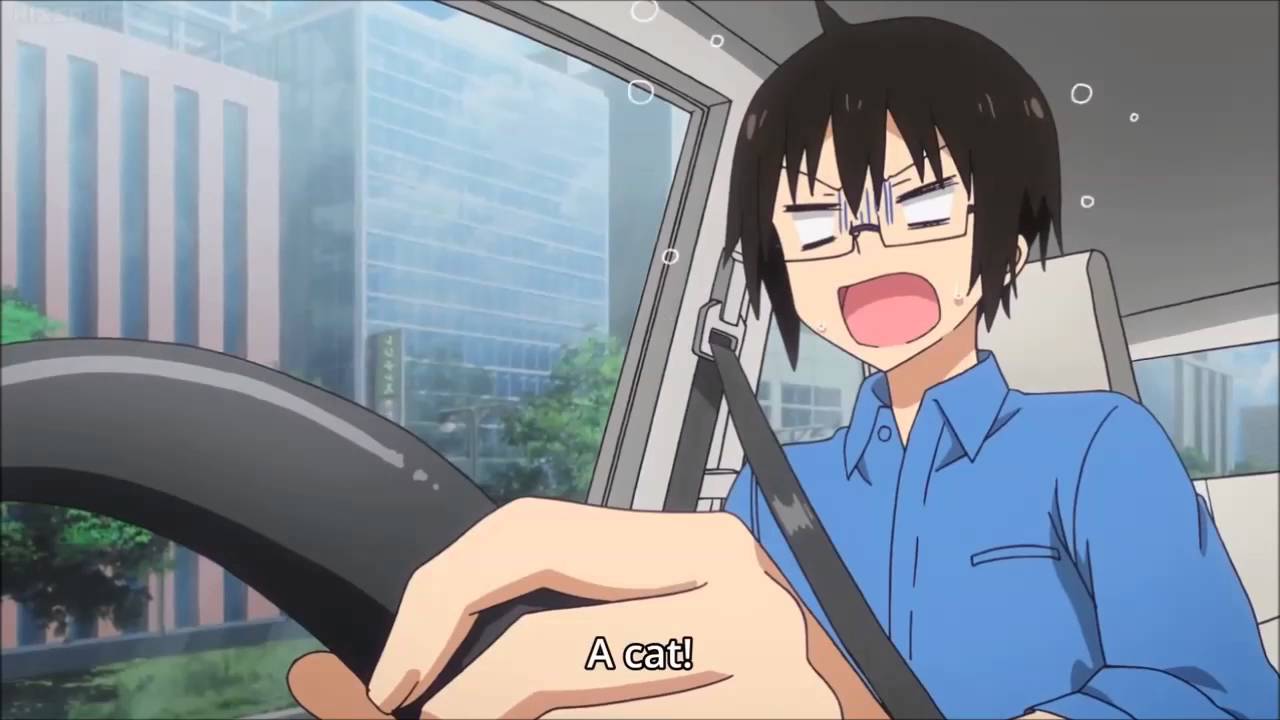 Taihei Doma is the deuteragonist of the series and also the older brother of Umaru Doma. He has messy black hair just like his sister with one part of the hair on top just standing up all the time. His skin is pale in color and seems to have no real muscle tone in his body. He still does not appear frail though and seems to be quite healthy. Usually, he is seen dressed up in a formal attire that happens to be his workplace uniform. Taihei is very kind to everyone around him and he never tries to be rude to anyone. He is also extremely hard working and loves cooking for himself and his little sister. It is also shown that he is very tolerant of the lazy behavior of those around him. Even when Umaru just hogs on junk food and makes no contributions to the home in any way, he still remains calm and says nothing to her.

Taihei may be a responsible adult but he is often used as a doormat by his sister who just keeps walking over him and makes him do all the housework. A lot of the times, he does worry about his sister’s dependence on him and even claims that he has spoiled her with all the pampering. He gets really pissed at her irresponsible behavior sometimes and snaps at her. But he calms down very soon and tries to take a friendlier approach towards making her understand where she went wrong. And somehow, this approach really works and never seems to fail him. 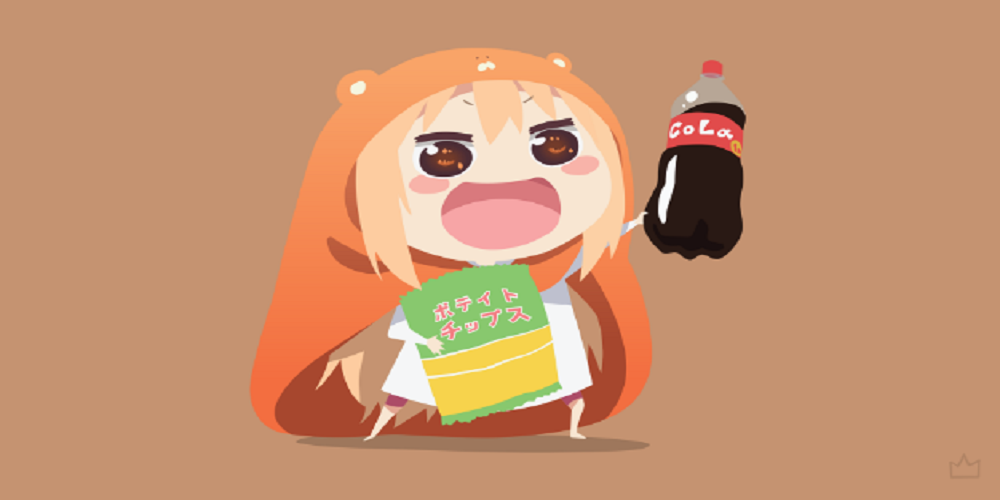 Umaru Doma is the main protagonist of the show, who is referred to as “Himouto!” from the title. “Himouto!” means “worthless lazy-bum sister”, which is a title that completely suits her personality. Her elder brother often labels her as a brat because he knows her true behavior inside the house. She has this weird unknown ability to completely transform herself between two different indoor and outdoor modes. In her outdoor mode, she is this beautiful teen who has the perfect body with an amazingly cute face. She often wears frilly shiny clothes that make her look all grateful to the public eye.

But her true form comes out when she is indoors where she suddenly turns into a toddler who depends on her brother for every single thing. This toddler form represents how lazy and irresponsible she actually is when she is a home, away from the sight of the public. Her chibi form is also referred to as the “hamster form” because she is often seen with an orange colored hamster hoodie on when she transforms into her childlike figure. When she’s at home, she only eats junk food and gobbles down bottles of cola while obsessing over video games.

Dorma even spends a lot of time reading manga and watching anime and for some weird reason, she often refers to herself as a third person. When she’s in her outdoor mode, she does allow anything to affect her mood, but at home, she acts really strange and becomes this whiny little kid. Her dual personality is quite interesting because it actually shows how people behave differently when they are out in a world full of strangers.