Will There be a Hit the Floor Season 5? 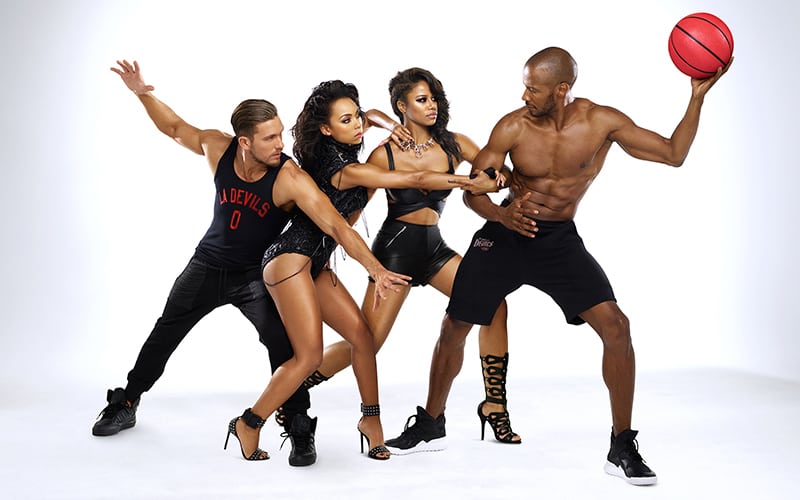 Hit the Floor is an American drama series that premiered on VH1 in 2013. The show, initially titled Bounce, is created by James LaRosa. It is based on the off-the-court drama of a fictional basketball team called the Los Angeles Devils. The series had its first season premiere on May 27, 2013, and wrapped up on July 29, 2017.

‘Hit the Floor’ was met with positive reception which prompted the makers to renew it for another season, and then again, for two other seasons. Now the question is, will there be a Hit the Floor season 5? We will delve into that question, but first, let’s quickly look into the details of the series.

Hit the Floor Cast: Who’s in it?

The series consists of an ensemble cast. Katherine Bailess stars as a Kyle Hart, a clever stripper-turned-cheerleader. Bailess is best known for playing the role of Erica Marsh on the CW hit One Tree Hill. Jonathan McDaniel (Lil J) stars as German Vega, the assistant coach of the Los Angeles Devils. The American actor and rapper is best known for his role as Devon Carter on the hit Disney Channel shows That’s So Raven and Raven’s Home.

Jelena Howard, the captain of the Devils, is portrayed by Logan Browning, an African-American actress who stars in the Netflix satirical drama series Dear White People as Samantha White. Dean Cain plays the role of Pete Davenport. Cain is popularly known for playing Clark Kent/Superman in Lois & Clark: The New Adventures of Superman.

Taylor Paige plays Asha Hayes (the breakout star of the team who climbs to the top using her dancing skills). This series gave Paige her breakthrough performance. She has previously featured in commercials for Adidas and McDonald’s. Additionally, Don Stark stars as Oscar Kinkade, the unscrupulous owner of the Devils.

Hit the Floor Plot: What is it about?

The first season starts with Asha Hayes becoming the newest member of the cheerleader team, The Devil Girls. She soon develops hostility towards the captain of the cheerleader team, Jelena Howard. Realizing that her mom Sloane used to be a Devil Girl herself, Asha is stunned to find that the previous player-turned-mentor of the Devils, Pete Davenport, is her biological father. Ahsha is also enticed by bad boy player Derek Roman, although she is in a relationship with German Vega.

Season two revolves around the homicide of Olivia Vincent, who was extorting several people related to the Devils. Meanwhile, Asha and Derek attempt to keep their relationship a secret, Pete’s estranged wife Lionel keeps visiting the arena at regular intervals and a devious new forward named Zero proceeds with a plan to replace star players Terrence Wall and Derek. Zero tries to seduce Jelena but is eventually dumped by her. Then he begins an intimate relationship with his male agent, Jude Kinkade.

In season three, Jelena and Terrence reconcile with each other and try to take control over the Devils and remove Lionel. Zero’s reluctance to open up to the world turns into a hindrance to his new relationship with Jude. From prison, Devils owner Oscar Kinkade looks for retaliation against Sloane, who has re-engaged in a relationship with Pete.

After the third season, a special episode premiered on VH1 whose plot revolves around Lionel and Pete being saved from the garage. After that, Pete tells the police that Oscar attempted to murder Lionel. Jelena survives, and the police questions the probable suspects in the shooting: Asha, Sloane, Jude, and Zero. Lionel negotiates with Oscar to abnegate her story in return for a divorce. Derek reveals to Jelena that he plans to leave the Devils for another group.

In the fourth season, we see that Asha and Zero leave behind Derek and Jude to explore new relationships. Chase’s and Olivia’s little girl Eve devices a new plan to wreck the Devils. New Devil Girls’ London Scott and Jamie Lawson get in a conflict with each other, and Derek gets disappointed with the performances of a new kid on the block Pax Lowe.

Hit the Floor Season 5 Release Date: When will it premiere?

After the premiere of the third season in 2016, the show was stalled for some time. On April 27, 2017, the creators announced their decision to move Hit the Floor to BET to produce its future seasons. However, after the fourth installment, the series was officially cancelled by BET on December 7, 2018. Creator James LaRosa later said that he had already planned for a potential fifth season. Since the show was axed, LaRosa took to twitter to announce the resolutions of several unresolved storylines.

Hence, as of now, Hit the Floor season 5 stands cancelled. But one shouldn’t lose hope just yet. The show previously changed its network from VH1 to BET, so, maybe it will be picked up by another network yet again. If that happens, we shall make sure to revisit this section and offer you an immediate update.

You can get a taste of the show by watching the trailer for the first season below: