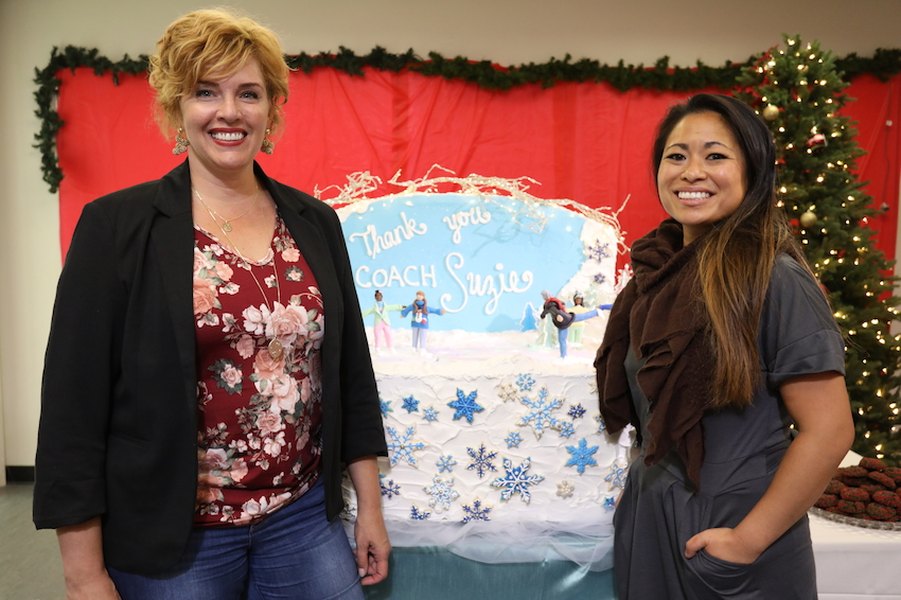 Holiday Cookie Builds is an American food television series that airs on Cooking Channel. There is no scarcity for food series on channels, to be honest. If you surf the internet for a bit, we will come across various shows, focusing their attention on food, most of which are cooking competitions of numerous varieties and formats, ranging from tasting different dishes from different places, to teaching shows, and a myriad of others in the category. So, to come up with a new idea in this regard is no less than a challenge. Amidst such difficulties, Holiday Cookie Builds has successfully stood apart in displaying their creative production and brilliant execution of edible masterpieces, which leave the viewers wanting more. The show proves that a team of two women is all the recipe you need to cook a successful show.

Holiday Cookie Builds has two women at its forefront, Brenda Nibely and Alisha Nuttall, who are nicknamed best friend bakers on the series. They are friends from Salt Lake City and are baking experts.

Brenda Nibely is not new to baking. She owns her own Gingerbread Architecture business, which is named Ginger Giddy. She is an expert in making custom houses and personalised gingerbread kits using just the ingredients available in most kitchens. She also has previous experience on Cooking Channel which makes her a familiar face for the channel’s audiences; she’d appeared on season 1 of Crazy Cookie Builds. One thing on the show that is new to her is partnering with the newcomer, Alisha Nuttall.

Alisha Nuttall was fond of baking since forever and decided to take baking more seriously; she began working and continued for ten years at Chili’s, baking for family and friends. She discovered her interests in cupcakes and joined the show Cupcake Wars, which she did not win at first, but made it to the seventh season in a revenge episode. Nuttall owns a bakery called Cravings Alisha’s Cupcakes, which is running quite successfully. She is seen partnering with Brenda in Holiday Cookie Builds.

Alisha shared in an interview, “Most people don’t want to eat the (cookie build). Because it’s such a nice creation, they want to keep it for a while, so (I) was in charge of making (clients) an actual dessert they could eat. I’ve never done anything this big before — working with so many talented bakers (was amazing). It’s unbelievable what you can do with cookies. I would love to do it again and hopefully, it’ll be a good show that people will want to watch.”

Holiday Cookie Builds features two women Brenda and Alisha, who are all set to bake wonderful treats with the help of the Gingerbread Dream Team that includes amazing bakers, and even a carpenter to build the dishes. Their aim is to fulfil their clients’ wildest wishes of building incredible cookies as well as decadent-tasting treats.

Their edible creations know no bounds as they build a giant eatable skating rink having fondant figurines for a surprise party, a replica of a historic estate house to share with the guests, a winter wonderland for a Christmas party having a five-foot of the local town Main Street replica, a monitor lizard from Asia for a reptile company, and a jaw-dropping 3D work of art for a local gallery during the Fairy Festival’s holiday auction. Together, they put together a cookie build celebrating the arrival of new polar bear, a dollhouse for a holiday party with vanilla cake, a huge nutcracker for a dance academy, a Santa’s sleigh racecar for a car-racing team, an edible Christmas tree for a boy, an edible 150-year-old log cabin for the Osmond family, a Santa Clause cookie with basketball theme, a special cookie built as a thank you for local firehouse, a replica of an English cottage style home, and a shortbread replica of the City-County Clock Tower for which they had to use drone to help them design.

Holiday Cookie Builds Season 2 Release Date: When will it premiere?

Holiday Cookie Builds premiered its first episode on November 9, 2018. Season one has 10 episodes. There is no news regarding the renewal or cancellation of season two yet and hence, we can’t speculate an air date for it. Based on the reviews received for season one, a second season looks quite likely and should be starting its production soon. As there are plenty of people waiting for new edible creations, we can assume that the good news will be announced soon. A release date sometime in November 2019 looks likely.

If you are craving for something delicious but outlandish, you might just be in for a treat, for Holiday Cookie Builds is meant for making those weird dreams come true. If we can dream it, they can build it, and then we can eat it! So, without any further wasting of time, watch the dreamy, mouth-watering episodes of Holiday Cookie Builds to get a hang of the show before the release of season two. If you don’t believe that such a thing could actually exist, get a glimpse of it below, and don’t forget to pinch yourself later! We will update this page with news on season 2 as we know.