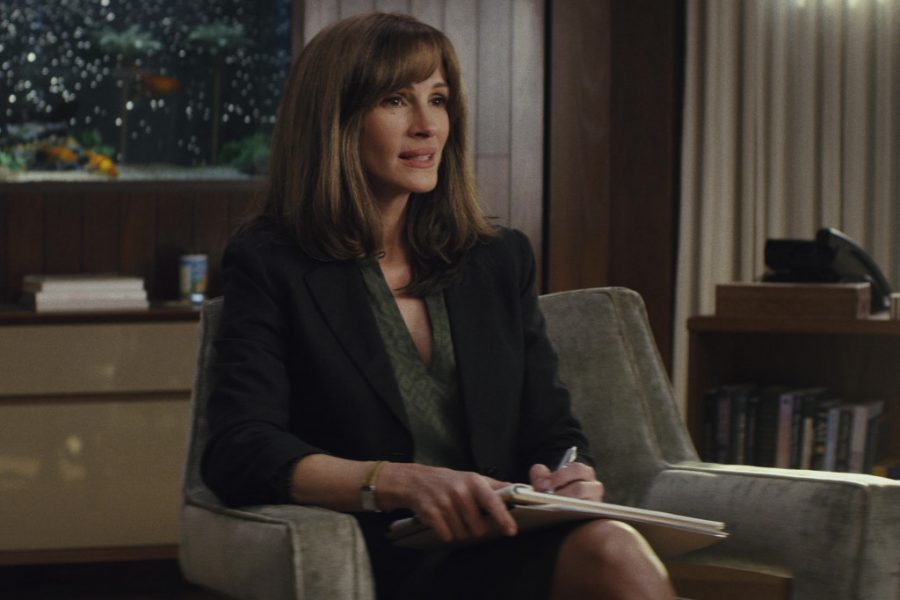 ‘Homecoming’ is a psychological thriller web television series by Amazon Prime Video. Based on a podcast of the same name created by Eli Horowitz and Micah Bloomberg, the show marks Oscar winner Julia Roberts’ debut on the small screen.

The news that the ‘Homecoming’ podcast would be made into a show first surfaced after Universal Cable Studios, in December 2016, won rights to the podcast and roped in Sam Esmail to direct the show. Less than a year later, on June 5, 2017, Amazon Prime Video ordered two straight seasons of the show.

After a wait of one-and-a-half years, the show finally made it to viewers’ screens on November 2, 2018, and was praised by critics and audiences alike for its near-perfect mix of mystery and sensibility. Now, fans and critics are eagerly waiting for the next season of the show, which will see some notable changes come in.

Homecoming Cast: Who’s in it?

Season 1 of ‘Homecoming’ is a multi-starrer, led by Julia Roberts, who plays the role of the protagonist of the show, Heidi Bergman. Bobby Cannavale, meanwhile, slips into the shoes of Colin Belfast, and Stephan James plays Walter Cruz. Other important characters include Thomas Carrasco, Craig, Reina, and Ellen Bergman, who are played by Shea Whigham, Alex Karpovsky, Ayden Mayeri, and Sissy Spacek, respectively.

Following impeccable performances delivered by the cast members, fans of the show were hoping to see everyone return in Season 2. However, on January 16, 2019, The Hollywood Reporter confirmed what many had been afraid of – it was announced that Julia Roberts would not be making a comeback in Season 2. Reportedly, Roberts’ contract with Amazon Prime Video was for a one-season commitment, and it is understood that Roberts does not want to extend that. That said, she will stay close to the production of Season 2, playing the role of an executive producer.

With Roberts’ departure, it is also unclear how many of the other major cast members will stay for Season 2. Amazon Prime Video has been playing this one pretty close to the chest, so we don’t know for sure, and we’ll all have to wait and see.

Homecoming Plot: What is it about?

The show follows the story of Heidi Bergman, a former caseworker at a special-purpose live in facility, the Homecoming Transitional Center run by the Geist Group. The purpose of the facility is to help war veterans make a transition from their violent experiences and settle into everyday civilian life. However, the reason why these veterans need this help is never revealed.

Four years after she left the facility, Heidi now has a new life where she works with her mother as a waitress. However, despite being seemingly happy, Heidi is haunted by the fact the she cannot clearly remember what went down during her tenure at the Homecoming Transitional Center.

Things blow up when a US State Department auditor asks Heidi why she left Homecoming, and Heidi quickly realizes that the facility had a sinister purpose, which was kept from her while she worked their. As she struggles to remember her time at Homecoming and why she left it, viewers are left with a haunting and intriguing mystery that leaves them wanting more. In particular, Julia Roberts is brilliant in the show and her portrayal of Heidi is one of the major highlights of ‘Homecoming’. While reviewing ‘Homecoming’, The Guardian, too, pointed out Julia Roberts’ brilliance, writing, “And Julia Roberts is excellent. She’s undimmed from her glory days. She has a difficult role that in other hands might have come off as one-dimensionally glum, but here her megawatt smile – which can still part clouds, by the way – works to humanise her character. Her scenes with Stephan James, who plays a veteran, require her to call in more quiet craft than the past five years of her movie work combined, and she nails every one of them. Turns out television is exactly her medium. Welcome to the party, Julia.”

It should be noted here that while the first season followed the original ‘Homecoming’ podcast (which is also divided into two seasons), the next will deviate from it. Commenting on this development, director Sam Esmail told The Hollywood Reporter, “We’ve deviated from very much of the podcast, so [season two of] the podcast doesn’t really have anything to do with the way the show is going. We’re working on a second season, but we have a very different trajectory for our show. I think when I signed on, I had only listened to the first six episodes of the podcast, which is the first season, and then from there we deviated completely. The show starts out fairly close to the podcast, and in the back half of the season we really start to see the major shifts and differences from the podcast”. So even if you have followed the podcast, expected the unexpected in Season 2.

In terms of reception, ‘Homecoming’ Season 1 was a hit among critics, and enjoys a whopping score of 98% on Rotten Tomatoes. Viewers, too, seem to have liked the show, and it enjoys a good rating of 7.6/10 on IMDb.

Homecoming Season 2 Release Date: When will it premiere?

Homecoming season 1 premiered in its entirety on November 2, 2018. As far as the next season goes, have good news for the fans. The show has been renewed for a second season. But as of now, Amazon Prime Video has not made any official announcement pertaining to the release date of Season 2. However, going by the fact that Season 1 premiered in 2018, Homecoming Season 2 can release sometime in November 2020. We will update this section with news pertaining to the production and release of Season 2 as and when we know about it. So, do check this section from time to time to stay in the loop.

While we wait for an update on Homecoming season 2, check out the season 1 trailer to refresh your memories. If you haven’t seen the show yet head over to Amazon Prime to catch all the episodes of the previous season.