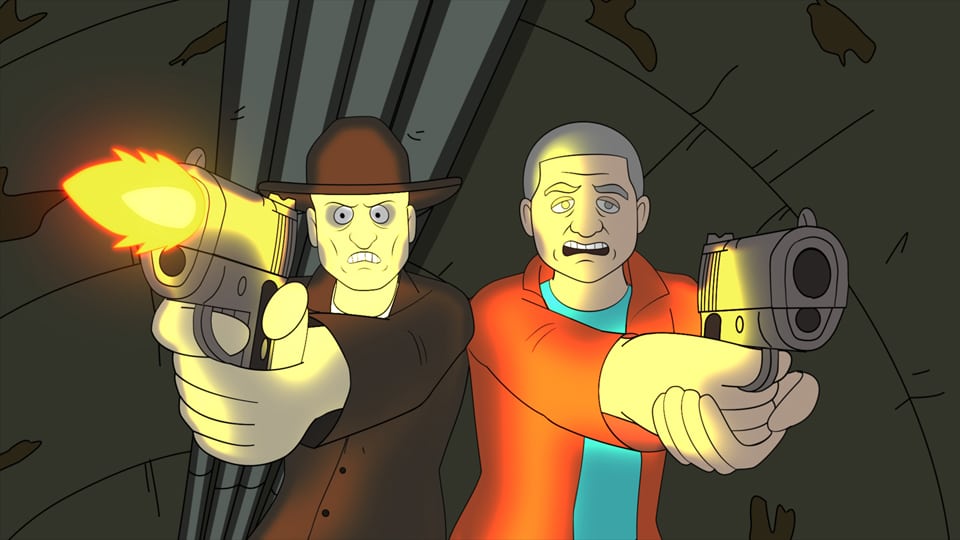 ‘Hot Streets’ is an adult American animated television series that airs on Adult Swim. It premiered on January 14, 2018. Created by Brian Wysol, the show is produced by Stoopid Buddy studios, Williams Street, and Justin Roiland’s solo Vanity card Productions. The series revolves around FBI agent Mark Branski and his investigative partner, Donald French, and their gripping supernatural investigations. Donald and Mark have an interesting yet timid dog, Chubbie Webbers. Featuring the voices of J.D. Rynzar, Scott Chernoff, and Chelsea Kane among others, the episodes of ‘Hot Streets’ have a running time of 11 minutes. ‘Hot Street’ is a gripping combination of animated horror and investigative intrigue.

Wysol, who is the brain behind the series, has had experience with cartoons which have adult themes like ‘Rick and Morty‘ and ‘Robot Chicken’. He brings all this experience to the table in ‘Hot Streets’ and we see it play out fantastically over the seasons.

Hot Streets Cast: Who’s in it?

‘Hot Streets’ is an animation series that features the voices of J.D. Rynzar for the character Mark Branski, who is an FBI agent and is considered the best at his job. However, his skill comes at the cost of his personality and Branski is often known to be eccentric and aloof, going so far as to be dismissive of those around him. Nonetheless, the character is in possession of knowledge of several eclectic subjects and takes part in several surreal activities. Scott Chernoff for the character Donald French, Branski’s younger partner. Usually inept at whatever he does, French is a pessimistic character who is often everyone’s whipping boy.  However, everyone can be full of surprises and French sometimes proves himself to be smarter than Branski, someone he aspires to be like.

Chelsea Kane voices the character Jen Sanders, Branski’s niece, and Justin Roiland voices Chubbie Webbers, the bloodhound whom Jen confides in. Ming-Na Wen voices the character Soo Park while Ernie Hudson voices John Wayne JetWayne Junior (Jet Jr.), Branski and French’s boss. These characters make up the main cast of the show and we can expect them to return in the upcoming season as well. We also hope to see some new characters being thrown into the mix, who will interact with our crime-solving team as they embark on their various adventures.

Hot Streets Plot: What is it about?

‘Hot Streets’ is a deadly combination of animated supernatural events and thrilling cop investigation. The plot revolves around the investigation of the stern and the arrogant FBI agent, Mark Branski along with his partner in this process, Donald French, a young and passionate man who is desperate to prove his mettle as an excellent investigative agent. They are accompanied by a timid and smart dog, Chubbie Webbers who speaks in a cowardly manner and Chelsea Kane, the niece of Branski. They all club together to investigate paranormal activities.

As this group takes on paranormal phenomena, we see a recurring theme emerge in the show. Most of the time this investigative group encounters well-meaning and harmless characters who are considered as adversaries, and they are killed without a second thought. What becomes rather evident when viewers see ‘Hot Streets’ is how it seems to be borrowing elements from iconic shows like ‘X-Files‘ and ‘Scooby-Doo!‘. The format where the group of characters investigates a mystery of potentially paranormal origins is what made these two shows a success. However, since ‘Hot Streets’ is an adventure series, every episode takes place in a new location.

Wysol also spoke about how the genesis of the show came to be, explaining, “I was a part of this film community called Channel 101 where you would make these little short films and the audience would vote on which mini-TV show they’d like to come back the next month. It’s actually a part of the same community that Randall Park came from; he used to also make his own content for that film festival. I had made two particular shorts: One was called “We Solve the Crime” and the other one was “Hot Cross Buns.” When I made those two shorts, they were the favorites of mine, so to create a show, I merged the sensibilities of those two shorts and that’s kind of the genesis of the show.”

‘Hot Streets’ seeks to keep expanding the show’s universe, exploring not only its mythologies but also going into depths of the characters to better understand their motivations. While Wysol has promised that the show does have an overarching tale, and is not just a series of disjointed episodes, he has also mentioned that the connecting arch has been suitably hidden in the narration so that it reveals itself gradually, thus holding on longer to viewers’ interest.

Hopefully, in the upcoming season, the show will continue in a similar fashion, with humor that is topical and often inappropriate. We also expect to see the adventures become more esoteric, the supernatural aspects come more to the forefront as the upcoming season delves head first into the world and mythos of ‘Hot Streets’. It would also be nice to see new characters thrown into the mix just to see how the group would cope with this new dynamic. Anyhow, the short episodes continue to hold our attention, and if Wysol keeps delivering tight, intriguing episodes as he has in the past seasons, then viewers will be sure to be left asking for more by the time the upcoming season ends.

Hot Streets Season 3 Release Date: When will it premiere?

‘Hot Streets’ Season 2 released on February 24, 2019. While no release date for Season 3 has been set, we can make an educated guess about the airing schedule of the upcoming season by studying the pattern that becomes evident from the release schedules of Season 1 and Season 2. Knowing that a new season has come out each year since the show first aired, Season 3 is expected to release in 2020. Furthermore, it would be logical to assume that Season 3 would follow in the footsteps of the predecessors and air sometime in January or February, 2020.

‘Hot Streets’ Season 3 does not have a trailer out yet. However, you can watch this clip below to get a better idea of what the show is about and what the future season might hold in store.