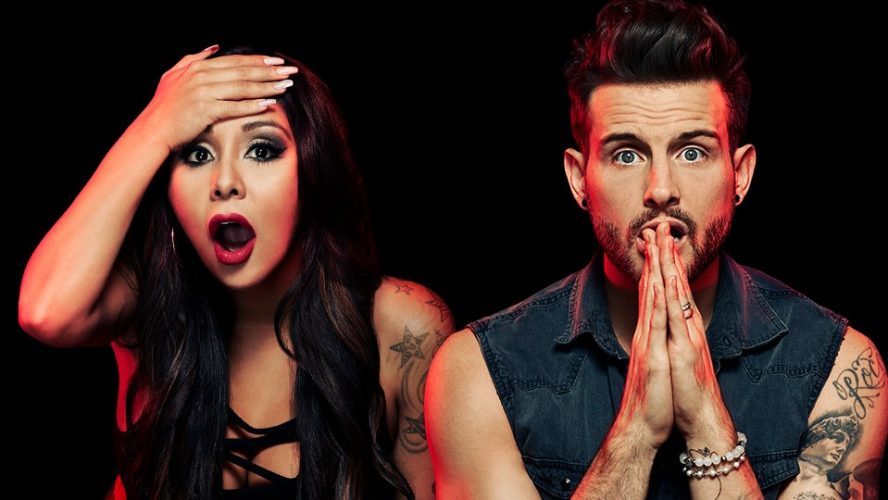 How Far is Tattoo far is an American reality show hosted by Nico Tortorella of the Younger fame and Nicole Polizzi of Jersey Shore fame. It is the American version of the UK show Just Tattoo Us. Every episode of the show features couples, friends or families putting their trust and faith in each other by choosing or designing a tattoo for the other person. The people are not allowed to see what is being inked permanently on their skin until the last moment of the big reveal. The end result often turns out to be quite dramatic, which is what the show is probably banking on. The show airs on MTV and it first premiered on October 11, 2018.

How Far is Tattoo Far Cast: Who’s in it?

The main cast of the show consists of the two hosts, Nico Tortorella, and Nicole Polizzi and the tattoo artists Jordan Dollarz, Tatu Ginsberg, Kevin Laroy, Travis Ross, Courtney Raimondi, Tiffany Tattooz. Nico is famous for his television series “Younger” where he played the role of a tattoo artist. On the other hand, Nicole’s claim to fame is “Jersey Shore”. Both the hosts are huge tattoo aficionados and have quite a few outlets of their own. The tattoo artists may also seem very familiar as they are known from the Blank Ink Crew and have their own hit reality series. Apart from the hosts and the tattoo artist, there are two contestants in every episode. They can be friends or family or even an ex who put their relationships to test by getting a tattoo of the other’s choice.

Anyone who is interested in participating in the show can simply go to their website TattooFar and get registered for it. The only condition for appearing on the show is that you should be above 18, but they do prefer candidates between 21 to 28 year old.

How Far is Tattoo Far Plot: What is it about?

The show features two contestants in every episode who may be friends, family or a couple who puts their relationship to an ultimate test. The contestants either chose or help design the tattoos that will be etched on to their companion’s body permanently without them knowing what it is. When both of the contestants are done choosing the tattoo, they then head to get inked. They are not allowed even a single peak at what has been inked. In the end, the tattoos are revealed to contestants — and to audiences. Suffice to say, it is the most dramatic moment in the show.

There have been moments on the show when the tattoo does not sit well with the recipient, and things get ugly really fast. There also have been times when the results were so bad that fights turned physical. During an an episode the reveal resulted in an instant breakup when the girlfriend decided to dump her guy by getting a “dumped” tattooed on his body with a big yellow dumpster to accompany the word.

There have been many speculations about the tattoo being real or if they are just faked for the sake of entertainment. Many contestants have shared in interviews that the tattoo is very real and permanent. Even the show’s hosts have gone on record to confirm that the tattoos are indeed real. When asked the hosts about their experience on the show, they said, “We’re really highly emotional. We cried as much as the clients did. We cried every episode.” Snooki added, “It was so much emotion. It would be like so happy and beautiful to like, ‘Oh my God, how could they do that to each other?’ It was like a roller coaster of emotions.”

As both the hosts are big tattoo fans, we expect them to ink each other on the show at some point. Nico went on to admit this by saying, ”We know it is happening at some point. Not this season, but maybe next season, we both are extremely emphatic and spiritual. I feel like something along those lines.” The show has been critiqued a lot for being obscene. Many reviews have summarized the premise of the show in a single line by saying “fame hungry people let haters ink their body”. The results of the show are more often than not negative and dramatic. People mostly end up with bad tattoos that they will have to live with for the rest of their lives or opt for laser tattoo removal which is again as painful as the tattoo itself and costs a lot of money.

How Far is Tattoo Far Season 3 Release Date: When will it premiere?

How Far is Tattoo Far season 2 released on May 23, 2019 on MTV. As far as the next season goes, we don’t have an official announcement yet. Though considering the popularity of the show, we would be surprised if it doesn’t get another season. Our best guess is that if the show does get renewed, How Far is Tattoo Far season 3 can release sometime in May, 2020. We will update this section as soon as we hear more.

How Far is Tattoo Far Trailer:

While we wait for an update on How Far is Tattoo Far season 3 check out this clip from the show. If you haven’t seen the show yet head over to MTV to catch all the episodes of the previous season.