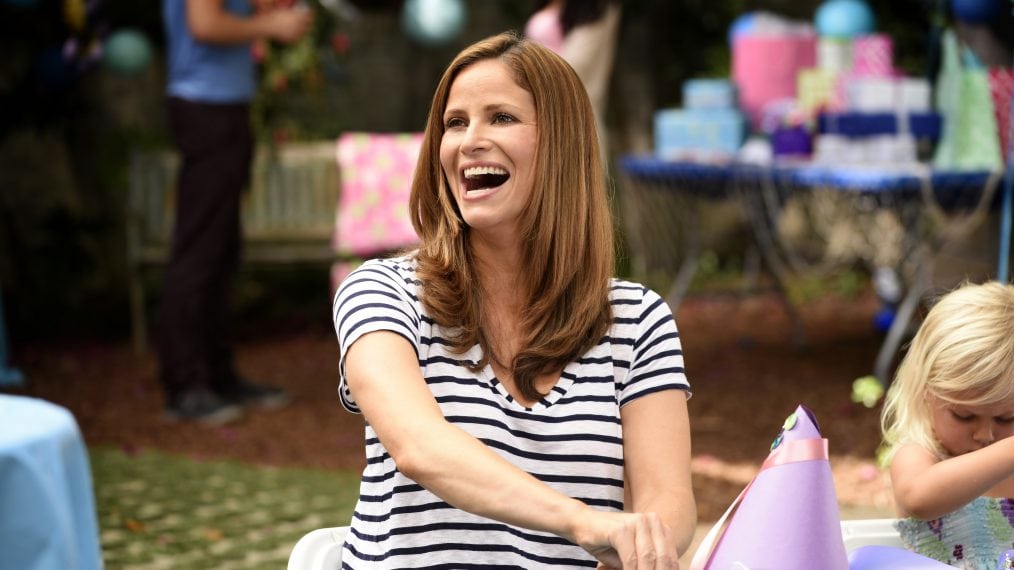 ‘I’m Sorry’ is an American sitcom television series that airs on truTV and first premiered on July 12, 2017. The series has been created by Andrea Savage, famous for her work on HBO’s ‘Veep‘. The show follows a seemingly confident comedy writer, wife and mom, who comically exposes her inner immaturity and neuroses through unexpected life situations.

The show has gathered a strong fan following over the seasons, and this is mostly because sitcoms try and make people comfortable with the characters and content, so they keep coming back for more. Savage has no problem doing so, having found her rhythm early on in the show. Critics too have praised it, saying, ” ‘I’m Sorry’ blends original stories with its lead’s real life, making for a familiar sitcom formula that mostly works.”

The cast of ‘I’m Sorry’ is led by Andrea Savage in the role of Andrea Warren, which is actually a dramatized version of herself. Tom Everett Scott of ‘La La Land‘ and ‘13 Reasons Why‘ fame appears as Mike Harris, Andrea’s husband and their daughter Amelia Harris-Warren is played by Olive Petrucci.

The recurring cast members include Kathy Baker, who is known for roles in ‘Edward Scissorhands‘ and ‘The Age of Adaline‘, appears as Sharon and Nelson Franklin, famous for roles in ‘The Office‘ and ‘New Girl‘, plays David. Judy Greer, best known for ‘Arrested Development‘ and ‘Kidding‘, is seen as Maureen and Jason Mantzoukas of ‘The Dictator‘ fame appears as Kyle, while Martin Mull is seen as a character also called Martin. Lyndon Smith appears as Miss Shelly.

In the upcoming season, the main and recurring characters are expected to return, and we hope some new faces are thrown into the mix as well to make things interesting.

I’m Sorry Plot: What is it about?

‘I’m Sorry’ can best be defined as a situational comedy that is firmly focused on Andrea Warren, a writer, as she navigates marriage, motherhood, a career, as well as her social life. The show is set in suburban L.A. with all its perks and pitfalls. As this working comedian tries to deal with life, we see how she has to play a balancing act, trying to be a good mother and wife, while also writing comedies about her experiences in life. The show deals with several aspects like Amelia’s racism, the fact that Andrea manages to make her husband uncomfortable with some of her jokes, and most importantly, how she seems to absolutely lack a filter when she is talking to acquaintances and friends. This results in a number of situations that are bound to make the viewers wince, and has Andrea explaining herself, which is perhaps what justifies the title of the show.

What stands out, apart from Andrea’s willingness to tackle any topic no matter how bold, is the chemistry that Andrea and her husband Mike share. Her innately inappropriate humor is balanced out with his easygoing attitude. He is the perfect spouse, who is not just her superfan, but an occasional critic of jokes, and most importantly, an easy target for Andrea’s humor which is often discomforting. One example immediately springs to my mind where she uses her mother’s nip slip by the poolside as fodder for a punchline. She asks her husband if he sees any similarity between the nipples of mother and daughter as she is of the opinion that her nipples take after her father’s. This is exactly the kind of inappropriate joke that Andrea keeps springing, but it just goes to show how much of a safe space her marriage is. It also goes to show that one does not have to be some psychological monster to have a skewered sense of humor, one just might be a devoted family member whose wit formation often edges towards the perverse.

Ultimately at the core of the show is the message that a woman can be a filthy comedian and a devoted mother at the same time. A critic has rightly cut to the show’s central conceit, saying, “Set amid an easy Los Angeles affluence, I’m Sorry is, like its antecedents ‘Seinfeld’ and ‘Curb Your Enthusiasm’, a character study in observational-sitcom mode that explores the consequences of a comic’s id let loose in the real world. But its largely familiar portrayals of comedians as “disgusting, broken people” and motherhood as a stadium for competitive nurturing belie the series’ quiet ambitions and exceptional strengths.”

While watching the show you will be forced to ask yourself: is transgressiveness a comic virtue. While I am inclined to agree that in most cases it could be, but at the same time, there should be a nuance to it, and ‘I’m Sorry’ drives that point home. Merely being unapologetically transgressive is not funny, and Andrea shows us that one can be brash and disgusting, while also being somewhat thoughtful and kind about which lines should not be crossed, even for the sake of eliciting laughter.

I’m Sorry Season 3 Release Date: When will it premiere?

‘I’m Sorry’ Season 2 premiered on January 9, 2019. On June 18, 2019, it was announced that the show had been greenlit for another season. Savage expressed her excitement at this news, saying, “I am so, so thrilled to have another season to prove wrong the theory that just because you are a mom, you are not allowed to find buttholes funny. #godswork”

Read More in TV Preview: The Outpost | Total Knock Out

While we wait for ‘I’m Sorry’ Season 3, you can check out the trailer for Season 2 below. If you have not seen the series and are in the mood for a good laugh, then this is the show for you.