What is the Cast of Ink Master: Grudge Match? 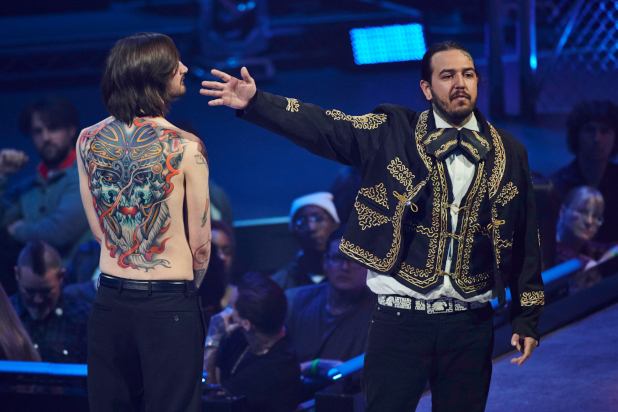 ‘Ink Master: Grudge Match’ is a spin-off of Paramount’s smash-hit series, ‘Ink Master‘, a show that became cultural phenomenon after its release. Produced by Truly Original, ‘Grudge Match’ pitches former participants of the parent tattoo competition reality show against their greatest rivals — to settle past grudges. The 12-episode series is executive produced by Glenda Hersh, Steven Weinstock, and Andrea Richter for Truly Original.

Ink Master: Grudge Match Cast: Who is in it?

‘Grudge Match’ features three former champions from the original ‘Ink Master’ — Ryan Ashley, DJ Tambe, and Cleen Rock One — as its judges and referees. Ryan Ashley, with a background of fashion design, is a leading tattoo artist who specializes in black-and-gray designs with beadwork, lace detailing, and ornamental jewels. She was the winner of ‘Ink Master’ season 8, the first-ever woman to become a champion in the reality show. Ashley has also featured as the host in Ink Master’s spin-off ‘Angels’. She is the owner of two oddities and antique shops in Pennsylvania.

DJ Tambe holds an experience of around two decades in the tattoo industry. He began his career in Rochester, New York, and then later moved to Las Vegas where he works in Bad Apple Tattoo. DJ became a household name after he appeared in season 2 of ‘Ink Master’, where he was announced as the runner up. He is the only tattoo artist to have earned the champion title twice in the hit competition series. DJ has, since then, traveled on multiple tours, appearing at dozens of conventions, and garnered several coveted accolades. In 2018, he teamed up with Bubba Irwin to launch Branded Tattoo Company in Nashville, Tennessee.

Cleen Rock One is a professional tattoo artist who owns the Chrome Gypsy Tattoo in Las Vegas. He appeared in the fifth season of ‘Ink Master’ and has also starred in its seventh season, ‘Ink Master: Revenge’. He has around 20 years of experience in tattooing and started his career by opening a shop in Illinois. When his talent began earning him guest spots and magazine features all across the US, he launched another shop in Las Vegas. He ranked as the runner-up in the fifth season of ‘Ink Master’.

Ink Master: Grudge Match Plot: What is it about?

In ‘Ink Master’, we witness some of the top tattoo artists from across the States as they battle one another to win a grand cash prize of US$100,000, alongside an editorial feature in the leading tattoo magazine ‘Inked’. He or she also receives the coveted title of “Ink Master.” The show features several rounds of tough challenges, especially curated to test the contestant’s tattoo-making and other related artistic skills. The judging panel comprises a team of renowned tattoo artists and enthusiasts, who make the final decision. The format follows an elimination sequence where each episode features one or more candidates being evicted from the game. The last man/woman standing is declared as the winner, who takes home the grand cash prize and is branded as the nation’s “Ink Master” for that particular season.

The mother show is a grand success, no doubt — so much that it has spawned multiple spin-offs and specials. However, it also gave rise to some bitter enmities throughout its run. It is common knowledge that the greatest artists also hold the worst grudges. And ‘Grudge Match’ seeks to put a final end to the biggest feuds in the history of tattoo artistry.

‘Ink Master: Grudge Match’ is the third spinoff of the hit tattoo competition franchise, after ‘Angels’ and ‘Redemption’. Here, former champions and contestants of the original series get a chance to “settle vendettas” against their greatest foes from the time when they competed against each other on the flagship title. Old grudges resurface as these former contestants battle one another in the ultimate showdown. The competition gets nasty as the country’s top tattoo artists display their skills and attempt to take down their greatest rivals from the original title.

‘Ink Master: Grudge Match’ season 1 premieres on Paramount on October 1, 2019. Its entire run for the first season comprises 12 episodes with each episode spanning a run-time of 60 minutes.

You can check out the official trailer for ‘Ink Master: Grudge Match’ season 1  below. You can also watch the extended sneak peek, where tattoo artists and known rivals Steve Tefft and Jeremy Brown participate in the ultimate 90-minute face-off tattooing round. For additional clips, head to the show’s official website.