Is Army of the Dead on Netflix, Hulu, Prime, or HBO Max? 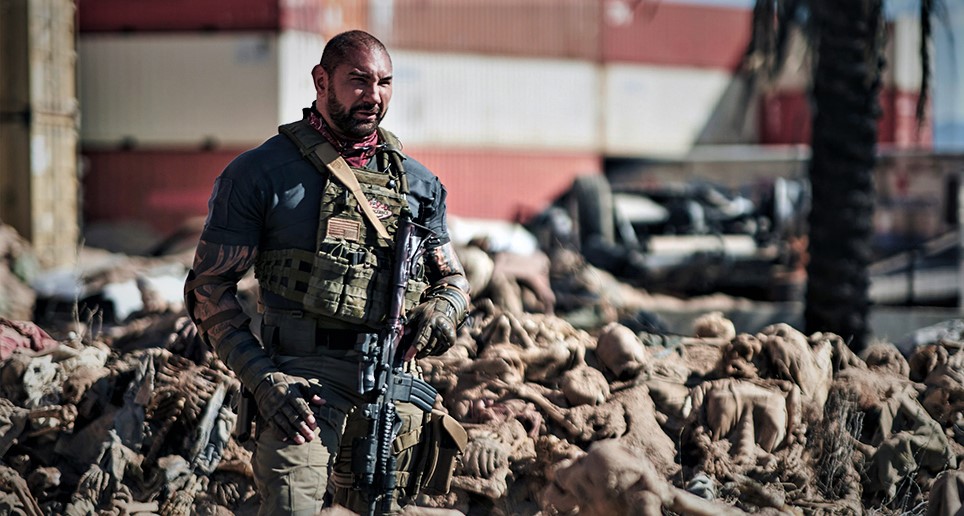 Starring Dave Bautista, Ella Purnell, Raúl Castillo, Huma Qureshi, Omari Hardwick, Ana de la Reguera, and Theo Rossi, ‘Army of the Dead‘ is a zombie heist movie directed by Zack Snyder. The film follows Scott Ward, a former mercenary hired by a billionaire casino owner to recover $200 million from a vault in Las Vegas. But there is one catch, Sin City is overrun by zombies who have managed to take control of the region and are ready to kill anyone who comes in their way.

With the threat of death looming over their heads, can Scott and his allies manage to pull off the epic heist? The Dave Bautista-starrer is an exciting and rare blend of zombie and heist genres that you should definitely watch. Here’s everything you need to know about it.

What is Army of the Dead About?

After a US military convoy collides tragically with a car carrying a pair of newlyweds, a zombie mysteriously emerges from one of the payloads. The undead kills some people and turn others into zombies. They manage to reach Las Vegas, where they wreak havoc and cause a zombie outbreak that sends shockwaves throughout the country. When all efforts of physical confrontation fail, the government uses containers to build a giant wall to stop them from spreading death and destruction in other regions of the country. While the military prepares for a strategic bomb drop to kill the zombies, a billionaire named Bly Tanaka enlists Scott Ward, a former mercenary, to enter Sin city and retrieve $200 million from a vault in his casino.

With the opportunity to earn $50 million for the otherwise risky assignment, Ward join hands with old friends and some new recruits for a once-in-a-lifetime heist. But with time running out for them, Scott will have to execute his plans quickly unless they can die tragically in the bomb drop scheduled for July 4. Will Ward and his allies manage to pull it off? In order to find out, you will have to watch ‘Army of the Dead.’ Here’s all the streaming information that you will need for it.

Is Army of the Dead on Netflix?

Netflix subscribers who are looking for the Dave Bautista-starrer are in luck. ‘Army of the Dead’ is available on the streaming giant, and one can watch the film here.

Is Army of the Dead on Hulu?

Hulu subscribers will have to check for the Zack Snyder directorial on other platforms since it is currently not available on the streamer. However, we recommend our readers watch ‘Little Monsters‘ or ‘The Cured.’

Is Army of the Dead on Amazon Prime?

Although ‘Army of the Dead’ is not accessible on Amazon Prime, subscribers can instead stream ‘The Night Eats The World‘ or the 2008 action-adventure horror movie of the same name.

Is Army of the Dead on HBO Max?

HBO Max has some really good zombie movies like ‘Warm Bodies,‘ ‘28 Weeks Later,’ or ‘28 Days Later‘ that you should definitely check out. Sadly ‘Army of the Dead’ is not currently included in the platform’s current offerings, so subscribers will have to find other alternatives to watch the movie or watch the films mentioned above on the streamer.

Where to Watch Army of the Dead Online?

‘Army of the Dead’ was released theatrically in the United States on May 14, 2021. Since its streaming rights were bought by Netflix, the film later premiered exclusively on the streaming giant starting May 21, 2021. The zombie heist film is, therefore, not accessible on any other platform.

How to Stream Army of the Dead for Free?

Since Netflix no longer offers a free trial for first-time subscribers, cord-cutters cannot stream the movie free of charge. However, we encourage our readers to avoid all illegal means and watch their favorite movies online only after paying for them.