Is Dexter Season 1-8 on Netflix, Hulu, Prime, or HBO Max? 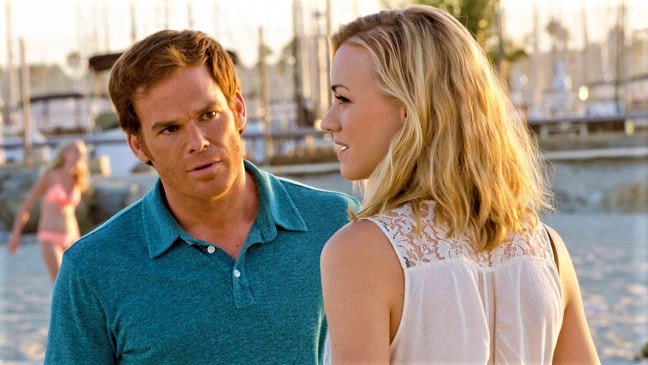 Based on Jeff Lindsay’s novel ‘Darkly Dreaming Dexter’ and his subsequent work, ‘Dexter’ is a crime drama series that centers upon the titular character who goes after and brutally butchers outlaws who have managed to trick the criminal prosecution system. His gruesome bloodlust is rooted in a horrific incident in his childhood which he was manipulated into channeling in his unjustifiable acts of vigilantism. Starring Michael C. Hall, Julie Benz, Jennifer Carpenter, and Erik King, the psychological thriller is developed by James Manos Jr. Curious to learn more about the show and how one can watch it online? We’ve got all the information right here!

What is Dexter About?

When Dexter was only three years old, he saw his mother getting butchered by a chainsaw right in front of him while he helplessly looked on. Soon after the tragic incident, he was adopted by Harry Morgan, a Miami-based police officer, and it appeared that the childhood naiveté would return to Dexter’s life. However, instead of helping Dexter come to terms with the tragedy, Harry manipulated him to use his bloodlust for random acts of vigilantism. Years after the fateful incident, Harry is now a forensic analyst who hunts criminals who have somehow managed to slip through the cracks of the judicial system.

Using the understanding and knowledge of forensic science, Dexter easily covers up his horrible trail of homicides with almost no DNA evidence on the crime scene to indict him. However, juggling his double life is not easy, and all it will take for him to be taken down is one minor mistake. How long can the ingenious serial killer avoid being caught? In order to find out, you will have to watch ‘Dexter.’ Here are all the ways you can do that!

Is Dexter on Netflix?

Netflix’s current catalog of television shows and movies does not include ‘Dexter.’ But subscribers of the streaming service can look for it on other platforms, or they can alternatively stream ‘Mindhunter‘ or ‘Collateral.’

Is Dexter on Hulu?

Hulu’s basic subscription does not include ‘Dexter.’ But if you have a Showtime add-on, then you can watch all the seasons of the series here.

Is Dexter on Amazon Prime?

People with an Amazon Prime subscription are in luck! The crime mystery series is available on the streamer, and you can watch your favorite episodes or seasons of the show right here.

Is Dexter on HBO Max?

HBO Max’s current list of offerings does not include ‘Dexter.’ However, those looking for something similar may enjoy watching ‘Prodigal Son.’

Where to Watch Dexter Online?

All seasons of ‘Dexter’ are accessible for streaming on Showtime and the app Showtime Anytime. You can also rent or purchase the crime mystery series on VOD platforms like Google Play, Microsoft Store, Vudu, YouTube, and iTunes. Moreover, fans can watch the show on DirecTV, Spectrum, Xfinity, and SlingTV.

How to Stream Dexter for Free?

Amazon Prime and Showtime both come with a 30-day free trial for first-time subscribers, while DirecTV offers a 7-day free trial. So, you can use the aforementioned offers to watch the crime mystery series free of cost, but only if you do so in the trial period. However, we encourage our readers to watch their favorite shows online only after paying for them.