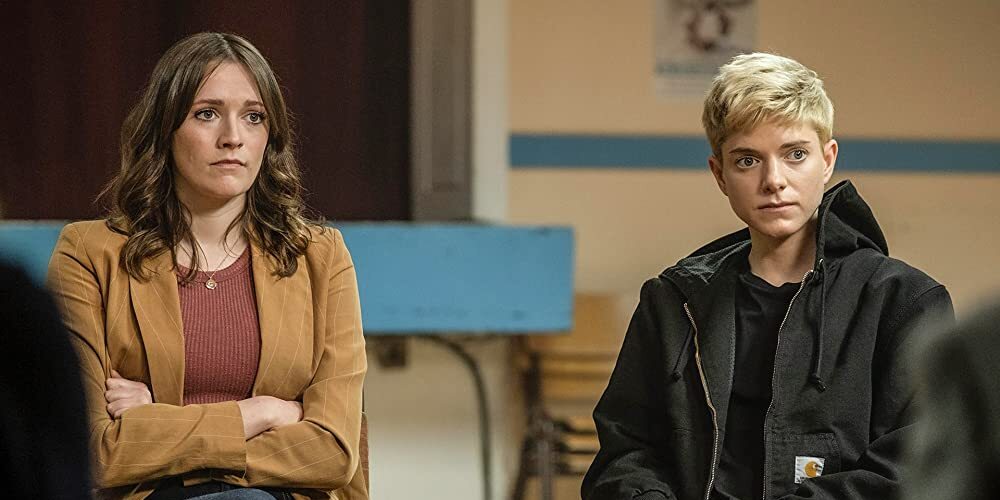 Created by Mae Martin and Joe Hampson, ‘Feel Good’ is a British comedy-drama series that revolves around the chaotic relationship between Mae and George. Mae is a Canadian comedian who starts a relationship with an English woman called George, who has never dated another woman. However, trouble starts brewing when George finds it hard to tell people about their relationship. The series initially released on March 18, 2020, in the UK, after which Netflix released it internationally on March 19, 2020.

The series received rave reviews for its heartfelt and intelligent comedy. The unusual approach it uses to highlight addiction and sexuality has been deeply appreciated by critics and viewers alike. Since the show is loosely based on Martin’s life, it adds an authentic touch to the storylines that many viewers identified with. Although the show revolves around gender non-conforming characters, their lives go beyond their identity and bring forth relatable human experiences. After binge-watching the second season, you must be wondering if a third installment is a possibility. In that case, you might be interested in what we know.

‘Feel Good’ season 2 premiered on June 4, 2021, on Netflix. The second season consists of six episodes with a running time of 26-30 minutes each.

As for the third season, here is the scoop. On December 7, 2020, the second season was ordered, but it was also announced as the show’s final act. Although this might be a disappointment to the fans, the good news is that it is not cutting the series short since it was always the plan to wrap up the story of Mae and George in two seasons. Upon its second season’s renewal, co-creator and leading cast member Martin said, “I’m beyond excited to be able to return to the world of ‘Feel Good,’ and to see Mae and George’s love story through to the dramatic conclusion we had always planned. I’m really deeply attached to this story, and I’m so grateful to be getting back to work with the incredible team at Objective Fiction and our hilarious cast.”

Martin was especially grateful for getting the opportunity to work on the show after spending most of 2020 in isolation. The series has also helped them realize long-held dreams of being a lead star. Martin and Hampson had also pitched several pilots, but nothing had materialized until this semi-autobiographical comedy show came into existence. Therefore, being able to shape the series as they had imagined was incredibly special to Martin.

The second season is exclusive to Netflix because Channel 4 did not renew the show. In an interview with The Guardian, Charlotte Ritchie (George) said, “Channel 4 didn’t pick up the second series, but I’m so relieved that Netflix did. I knew that Mae [Martin] and Joe [Hampson] had planned a two-series trajectory and had solid ideas of how it was going to end. It would’ve been a real shame to cut it short. I think it feels different to the first series. Our characters are more mature, and everything has progressed.” In a recent interview with BT TV, Ritchie and Martin were asked about the possibility of a third season. While Ritchie was excited about the prospect, Martin said, “It’s a nice fantasy. But in reality, I wouldn’t want to mess with what we’ve done, I think. It does motivate me to write another TV show and cast Charlotte Ritchie in it.” Therefore, taking all these factors into account, it is unlikely that ‘Feel Good’ season 3 will ever get made.

According to Ritchie, the non-binary love story in the show has been a very cathartic experience. She shared that she and Martin received feedback from many viewers. According to the English actress, the show hits a universal cord because it shines a light on all kinds of relationships that people cannot share with the world for whatsoever reason.

If you are desperate to see more content from Martin, you are in luck! Netflix announced that they would be developing another show with Martin and the production company Objective Fiction. Earlier in March 2020, Martin teased that they would love to write a sci-fi series set on Mars. Of course, if it ever works out, they would want Lisa Kudrow (who plays Linda) to be a part of that whodunit. In the meantime, those who cannot get enough of ‘Feel Good’ can wait for the bloopers of both seasons. In the late May 2021 conversation with BT TV, Martin said that they were as excited to release those video clips as they were for the show.