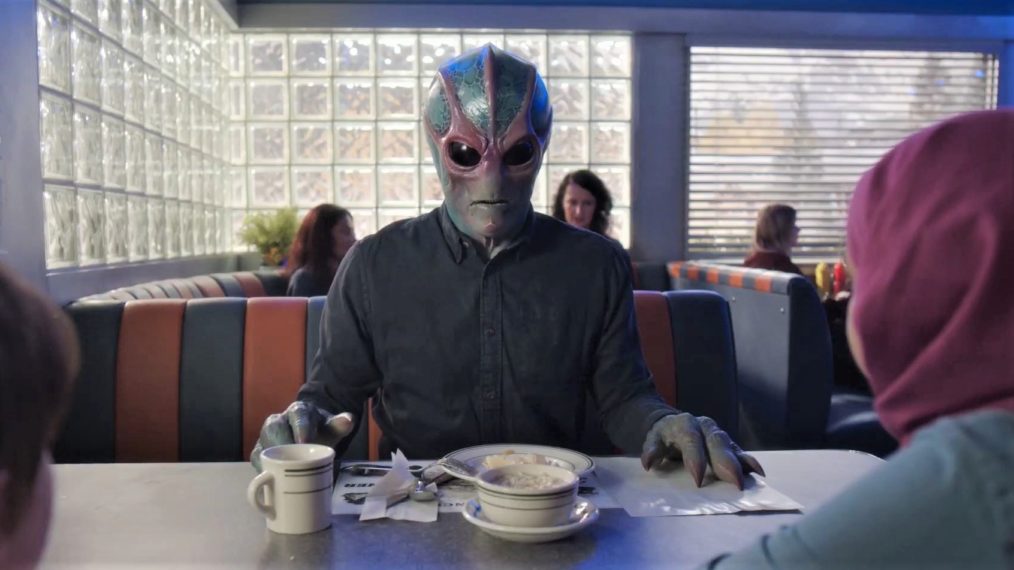 Created by Chris Sheridan, ‘Resident Alien’ is a comedy-drama series that narrates the unusual tale of an extraterrestrial creature that crash lands on Earth. Instead of following the mission he is assigned, he adopts another identity and questions the morality of his decisions. The science fiction series is a television adaptation of the eponymous comic book by Peter Hogan and Steve Parkhouse. It features Alan Tudyk in the role of the titular protagonist and is well-liked on a wide scale because of the humor entrenched in an interesting premise. If you’re eager to watch the show online, here is everything you need to know!

What Is Resident Alien About?

‘Resident Alien’ starts with an alien landing on Earth with a goal to wipe humanity from existence. He ends up murdering a pathology physician named Dr. Harry Vanderspeigle and adopts his identity to survive on the planet. However, when he is asked to examine the body of his own victim unbeknownst to the people, he begins to have second thoughts about his mission.

At the same time, the alien – now living as Harry – encounters a nine-year-old boy who can see through his facade. Although he lives a simple life, it doesn’t take much time for Harry to get roped into overwhelming matters that take over the town. Soon, he realizes the importance of fitting in, which causes chaos and drama. Now, without further ado, here are all the streaming options available!

Is Resident Alien on Netflix?

Taking into consideration the unavailability of ‘Resident Alien’ on the streaming platform, we’d like to recommend similar series in the same vein. If you’re particularly looking for shows based on aliens or space, you might like ‘Star Trek: The Next Generation‘ as well as ‘Alien Worlds.‘ The latter is a docufiction that talks about the potential existence of aliens on other planets using the rules of life applied on Earth.

Is Resident Alien on Hulu?

If you’re a subscriber to Hulu, the show will be accessible through Syfy on Hulu+Live TV. But if you’re open to streaming other shows that you can watch on the streamer’s library, you can go for ‘People for Earth.’ It is a comedy series quite similar to ‘Resident Alien.’

This alien-centric comedy series is available for streaming on Amazon Prime Video on-demand here. Therefore, you can purchase an episode for $2.99 or an entire season for $24.99.

Is Resident Alien on HBO Max?

Sadly, ‘Resident Alien’ is not a part of HBO Max’s current offerings. However, you may check out similar options on the streamer, such as ‘Doctor Who.‘ The British sci-fi series follows an extraterrestrial time traveling creature known as The Doctor as they travel the universe.

Where to Watch Resident Alien Online?

‘Resident Alien’ is officially broadcast on Syfy, so online viewers can watch the episodes on Syfy’s official website. Live streaming options can be utilized on DirecTV, FuboTV, Sling TV, YouTube TV, and Xfinity Stream. Moreover, the episodes of season 1 are available on VOD platforms like iTunes, Vudu, Microsoft Store, Google Play, YouTube, and Spectrum. In addition, ‘Resident Alien’ can be streamed on Peacock.

How to Stream Resident Alien for Free?

Hulu+Live TV, FuboTV, and YouTube TV come with seven days of free trial post-subscription. In addition, Peacock gives its new subscribers a week to experience its premium plan free of cost. Therefore, you could use the abovementioned offers to watch a few episodes before you are obligated to pay. It is to be noted that we discourage our viewers from using illegal ways to watch content online. With that said, the best way to go about it is to buy the required subscriptions to watch this show.