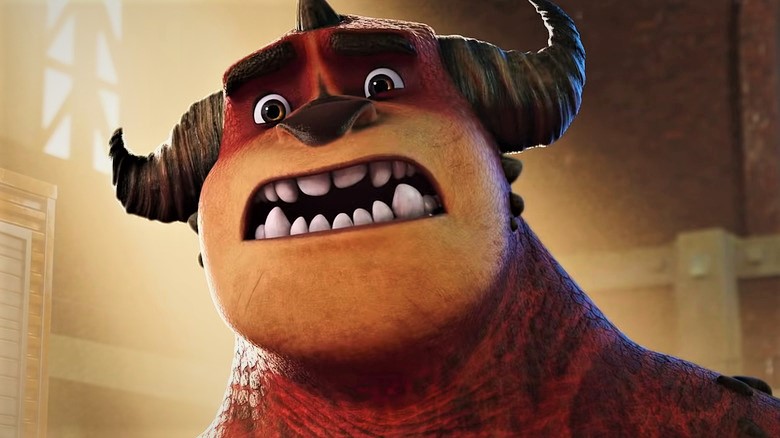 Co-written and directed by Hamish Grieve, ‘Rumble’ is an animated sports movie inspired by Rob Harrell’s graphic novel ‘Monster on the Hill.’ The film follows a young girl named Winnie who plans to train Steve AKA Rayburn Jr – an inexperienced giant red reptilian monster – for a famous professional wrestling global sport. Unfortunately, no one except her can get behind her ambitious goal as she begins to help Steve push his physical limits and confront his fears in the ring.

Featuring talented voice actors like Will Arnett, Terry Crews, Geraldine Viswanathan, Joe “Roman Reigns” Anoa’i, and Tony Danza, the sports animated film is an action-packed drama that captivates viewers to the very end. In case you are intrigued by the film’s premise and wish to learn more about it, then we have got you covered.

What is Rumble About?

Set in a fantasy world where humans and giant monsters co-exist peacefully, sport is an essential aspect of daily life. The latter participate in a brutal wrestling sport called Monster Wrestling and are given the status of superstar athletes. A trainer named Winnie plans to follow her father’s legacy by helping a red monster named Steve to compete in the professional sport and defeat the reigning champion Tentacular. But, sadly, the amateur wrestler is inexperienced and lacks self-belief.

Unperturbed by the hurdles in Winnie’s path, she begins to train her new friend as the day for the in-ring action approaches. But can the inexperienced wrestler survive in the highly competitive world of Monster Wrestling? In order to find out how the storyline unfolds, you will have to watch ‘Rumble.’ And here’s how you can do that.

Is Rumble on Netflix?

Netflix’s massive catalog of television shows and movies does not include the Hamish Grieve directorial. But there are some really good animated films worth watching on the streaming giant. So, Netflix subscribers can watch other animated movies like ‘Xico’s Journey.’

Is Rumble on Hulu?

‘Rumble’ is not accessible on Hulu, and it’s highly unlikely that the film will be available on the streamer even in the near future. Hence, we recommend our readers alternatively stream ‘Racetime.’

Is Rumble on Amazon Prime Video?

Amazon Prime Video’s regular catalog does not include animated movies as of now. It is also not available as on-demand content. Therefore, Prime subscribers can watch ‘Wheely.’

Is Rumble on HBO Max?

‘Rumble’ is currently unavailable on HBO Max. Viewers who are looking for films of the same genre can instead watch ‘Space Jam: A New Legacy.’

Is Rumble on Disney+?

No, the massive catalog of Disney+ does not include ‘Rumble.’ But people who have a subscription to the streamer may enjoy watching ‘Cars.’

Where to Watch Rumble Online?

The computer-animated sports comedy film is accessible for streaming on Paramount+. People who have a subscription to the platform can watch the movie on the official website. The Hamish Grieve directorial is exclusively streaming on the aforementioned platform; therefore, it is not available for rent or purchase on any other VOD website.

How to Stream Rumble for Free?

Paramount+ usually offers a 7-day free trial to first-time subscribers. Therefore, if you wish to watch the film for free, then you can do so, provided you stream it during the trial period. However, we encourage our readers to always pay for the content they wish to consume online.