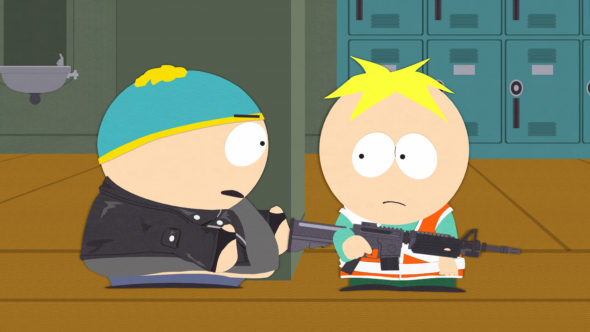 Created by Trey Parker and Matt Stone, ‘South Park‘ is an animated sitcom developed by Brian Graden. The series revolves around the misadventures of four boys living in the mountainside town of South Park, Colorado. Although the grade-schoolers do not always get along, they find a way to stick together. Moreover, their inquisitive nature regularly leads them into hilarious situations.

Featuring voices of Trey Parker, Matt Stone, Isaac Hayes, and Eliza Schneider, the comedy series has evolved as one of the most well-known animated shows of all time. Curious to learn more about its premise and where it can be streamed? We have got you covered!

What is South Park About?

Stan, Kyle, Eric, and Kenny are a group of fourth-graders who live in South Park, Colorado. Kyle comes from a Jewish family who has been raised with a strict moral code, making it difficult for him to get along with the rest of his friends. His best friend is Stan Marsh, a boy with a golden heart whose kindness can win anyone over. The duo spends a lot of time with hot-headed bully Eric Cartman and his sidekick Kenneth McCormick AKA Kenny. The show focuses on their hilarious adventures as they unknowingly uncover the comical absurdities of their small world. Now let us go through all the ways one can watch the show!

Is South Park on Netflix?

‘South Park’ is currently unavailable on the streaming giant. Furthermore, the series is highly unlikely to arrive on the platform any time soon. Viewers looking for other adult animated shows may like ‘Paradise PD‘ or ‘BoJack Horseman.’

Is South Park on Hulu?

Unfortunately, the show is not part of the platforms’ regular catalog, but subscribers can watch ‘South Park’ live on Hulu+Live TV. So in case you are looking for shows to stream on the platform, we recommend ‘Rick and Morty‘ and ‘Solar Opposites.’

Is South Park on Amazon Prime?

Sadly, the animated sitcom is not a part of Amazon Prime’s regular catalog. However, ‘South Park’ is available for rent or purchase on the platform here.

Is South Park on HBO Max?

The show is also available on HBO Max. People who have a subscription to the platform can watch their favorite episodes here.

Is South Park on Disney+?

Subscribers who are looking for ‘South Park’ on Disney+ will be disappointed as the show is not a part of its massive catalog. Therefore, we recommend our readers alternatively watch ‘Goof Troop‘ or ‘Darkwing Duck.‘

Where to Watch South Park Online?

The animated comedy series is accessible for streaming on South Park’s official website and Comedy Central. You can also watch the episodes on live TV streaming platforms such as FuboTV, DirecTV, Xfinity, Sling, Philo, and YouTubeTV. Several VOD platforms have the show in their catalogs for rent or purchase, such as YouTube, Spectrum, Vudu, Microsoft Store, Google Play, and iTunes.

How to Stream South Park for Free?

Platforms like Hulu+Live TV, FuboTV, YouTubeTV, and Philo come with a 7-day free trial. In addition, Sling is offering a 3-day free trial to its first-time subscribers. So, people who wish to watch the show free of cost can temporarily use any of the aforementioned offers. However, you will eventually require a subscription to watch the latest episodes. We encourage our readers to refrain from using illegal means and watch their favorite content online only after paying for it.