Is The Baker and the Beauty Season 2 Cancelled?

‘The Baker and the Beauty’ is a romantic comedy series that follows the story of a simple baker and his whirlwind romance with a supermodel. The show centers around Daniel Garcia’s (Victor Rasuk) charming family bakery in Miami, which serves as the “sweet” backdrop to the unconventional romance. It is based on the popular Israeli show ‘Lehiyot Ita,’ which translates to “Being With Her.” The Israeli version of the show is ranked as one of the highest-rated scripted series in its home country. Its American counterpart first premiered on ABC in April 2020 and is also available to stream on Netflix.

Despite a loyal fan following and inspiration from a highly popular series, the show was canceled by ABC after just one season. However, with fans clamoring for more and many romantic entanglements still left to be explored on the show, is there a possibility that we might see ‘The Baker and the Beauty’ season 2 at some point in time? We dug around for all the information on the fate of this sweet romantic series and here’s what we found out.

The Baker and the Beauty Season 2 Release Date

On June 15, 2020, ABC network announced that ‘The Baker and the Beauty’ would not be renewed for a second season, reportedly due to low viewership. The show, originally intended to become popular as “comfort food fare” that would do well during the pandemic and subsequent lockdown, could not garner a high enough viewership and was cited as one of the network’s lowest-rated series.

The cancellation of the show, however, was met with widespread outcry by not just fans but also the cast members. Leading lady Nathalie Kelley, who portrays the supermodel love interest, Noa Hamilton, on the show, called the cancellation ABC’s “loss.” Apart from the cliffhanger ending of season 1, showrunner Dean Georgaris also hinted that season 2 planned to explore four love stories, each at a crucial juncture, making fans all the more curious about season 2.

Guys we appreciate the love and well wishes following ABC’s decision not to renew us for a second season. But honestly their loss will be someone else’s gain, so stay hopeful and activated about the show while we find it the right home! Love u all #thebakerandthebeauty

However, an even bigger cultural issue seems to be stemming from the cancellation of the show. The host network ABC was called out as “tone deaf” by lead actress Kelley for canceling a show based on Latino characters at a time when diversity, inclusion, and representation is a major issue. The outcry was taken up by other members of the cast, as well as celebrities like Eva Longoria and Zoe Saldana, who pointed out the dearth of mainstream Latino shows.

It is not often that the cancellation of a show becomes a cultural issue, but it seems to be the case with ‘The Baker and the Beauty.’ The show is currently looking for a new home, with streaming platforms being considered as a possibility. Lisa Vidal, who essays the protagonist’s mother Mari Garcia on the show, confirmed the same on social media and even shared a petition to save the show, saying that despite there being over 500 television shows on the air, there were zero Latino shows on network television. 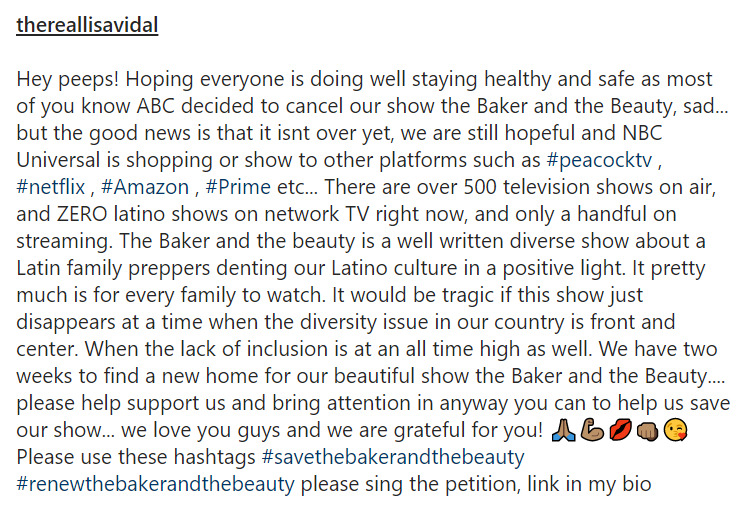 Hence, we can conclude that ‘The Baker and the Beauty’ season 2 stands officially canceled. There is still a lingering hope that it will find a new home, and fans will get to see more of the unconventional and undeniably “sweet” romance sometime in the future. Besides, now that it is a part of Netflix’s streaming roster and is available to an international audience, there is a great chance of the show managing to meet the streaming giant’s viewership expectation and gain a go-ahead for a second season.

Read More: Where Was The Baker and the Beauty Filmed?