Is The Eyes of Tammy Faye on Netflix, HBO Max, Hulu, Disney+, or Prime? 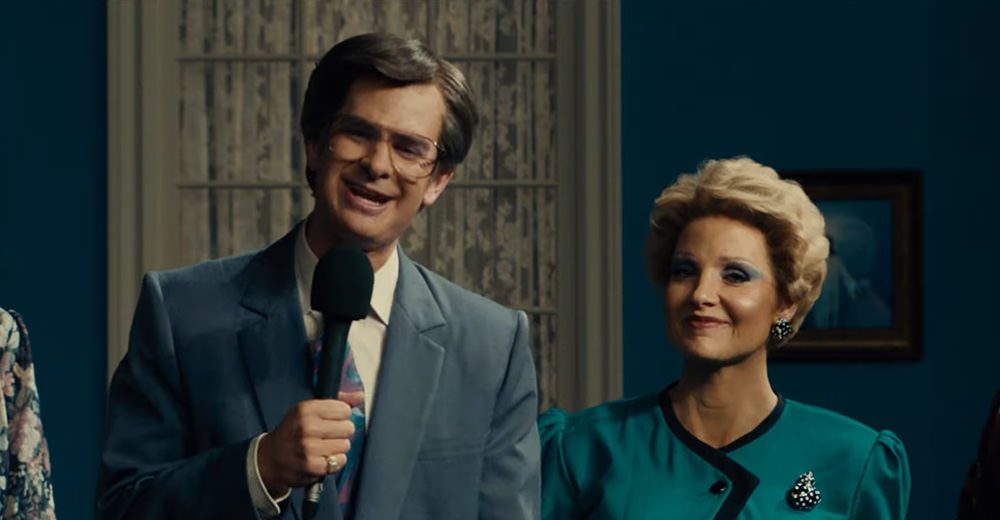 Directed by Michael Showalter, ‘The Eyes of Tammy Faye’ is a biographical drama based on the 2000 documentary of the same name. The movie narrates the ups and downs in the life of Tamara Faye Messner, a beloved singer, devout evangelist, and well-known TV celebrity. Apart from her professional life, the film also sheds light on her turbulent marriage to Jim Bakker, their divorce, and her subsequent marriage to Roe Messner. Thanks to the excellent production work and fantastic performers, the biopic has received high praises from critics and audiences.

Jessica Chastain, who is also one of the producers of the movie, has been nominated for Best Actress in the 94th Academy Awards thanks to her phenomenal portrayal of Tamara Faye. ‘The Eyes of Tammy Faye’ also benefits from the amazing actor Andrew Garfield who plays the role of Jim Bakker with great panache. Other cast members for the film include Cherry Jones as Rachel Grover and Vincent D’Onofrio as Jerry Falwell. If you, too, can’t wait to watch the journey of Tamara Faye, here is all you need to know!

What is The Eyes of Tammy Faye About?

The movie revolves around Tamara Faye, who moves to Minneapolis from International Falls to study at the North Central Bible College, where she meets Jim Bakker. The two eventually fall in love and get married, much to the disapproval of Tammy’s mother, Rachel Grover. The two drop out of college and travel across the USA to communicate with other Christian communities. While Jim preaches to the masses, Tammy puts on a singing puppet show to entertain the children and impart the message of love and faith. Their unique style makes them stand out to the Christian Broadcasting Network (CBN).

The network offers the pair the opportunity to host their own children’s show ‘Jim and Tammy,’ which the couple takes. However, the Bakkers soon wish to have more control over the what and how to spread their message. They establish their own network called Praise the Lord (PTL); however, it is not an easy feat, and the duo finds themselves ambushed with all the struggles that come with running their network and the fame they have found through their work. We know you cannot wait to watch the life story of Tammy Faye, and we have just the details you need!

Is The Eyes of Tammy Faye on Netflix?

Netflix might not host ‘The Eyes of Tammy Faye’ on its platform, but it does have an expansive selection of mind-blowing biopics for its subscribers to watch. You can check out the movie titled ‘The Most Hated Woman in America,‘ based on the life of Madalyn Murray O’Hair, who actively worked to promote atheism and the separation of church from the state in the country. Alternatively, you can opt for the 2011 retelling of the life of the first female Prime Minister of the UK, Margaret Thatcher, titled ‘The Iron Lady.’

Is The Eyes of Tammy Faye on Hulu?

You can indeed watch ‘The Eyes of Tammy Faye’ on Hulu by adding HBO Max to your platform here! Hulu does offer similar movies without any additional costs for its subscribers, like ‘Spencer,’ which follows a fictionalized tale of Princess Diana during the Christmas celebrations of 1991. You can also see ‘Judy,’ which centers upon showbiz legend Judy Garland, during the last year of her life.

Is The Eyes of Tammy Faye on Amazon Prime?

Although ‘The Eyes of Tammy Faye’ is not available to stream on Amazon Prime, you can still buy it on the platform for $9.99 right here. You can also rent the film on Prime Video for $2.99 for 30 days, and you will have 48 hours to finish the whole movie once you have started watching it. However, the members can still use their memberships to watch some similar movies like ‘Being the Ricardos‘ and ‘Crown Heights.’

Is The Eyes of Tammy Faye on HBO Max?

Yes, go ahead and use your HBO Max subscription to watch the critically acclaimed ‘The Eyes of Tammy Faye’ here!

Is The Eyes of Tammy Faye on Disney+?

You’d be delighted to know that ‘The Eyes of Tammy Faye’ does fall under the vast umbrella of movies available on Disney+; subscribers of the platform can watch the film here!

Where to Watch The Eyes of Tammy Faye Online?

You can watch ‘The Eyes of Tammy Faye’ on HBO Max, Disney+ and Hulu. Another way you can stream the movie is by heading to the platforms like Spectrum on Demand, DirecTV, and Xfinity. Additionally, the movie can be purchased or rented from YouTube, Google Play, Vudu, Microsoft Store, and iTunes.

How to Stream The Eyes of Tammy Faye for Free?

While Hulu does offer a 30-day free trial, you may still have to pay additional charges to add HBO Max to your plan. However, DirecTV has a 7-day free trial which you can use to watch ‘The Eyes of Tammy Faye.’ Xfinity also offers a month-long trial at no cost for its new users. Spectrum’s 7-day free trial is only available to those who already use Spectrum Internet services. That being said, we urge the readers to avoid any illegal methods and purchase the required subscriptions to watch their beloved movies. This way, you will also support the film and the people involved in its making!

Read More: Is The Eyes of Tammy Faye Based on a True Story?